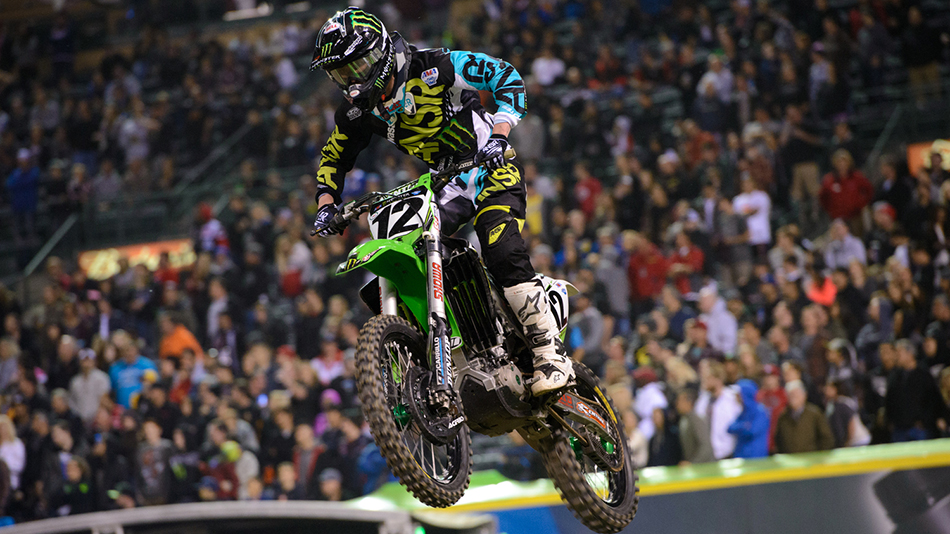 Q: Can Ryan Villopoto wrap up the championship this weekend?

A: If we’re being honest, that wasn’t really a question. With just two points between Villopoto and his fourth title, he didn’t need to do much.

Villopoto came out and absolutely dominated East Rutherford, with a commanding victory in tricky conditions. His next closest challenger before the main, James Stewart, suffered with a bad start (and later on a knee injury), which ended any small chance he had of taking the championship.

Over the coming weeks, many articles are going to be written about Ryan Villopoto. So, I thought I’d jump in and briefly discuss how great he is. The success he has had over the last four years isn’t just impressive, it’s incredible.  It’s really easy to forget the injuries RV has encountered – the constant knee problems that could have ended his career – it becomes even more impressive. Ryan, I salute you.

Q: How will Jake Weimer fare on his return?

A: In a nutshell, he was very average. Jake’s been out with an injury for the last couple months, and it did seem like a strange move to come out and race the last two race weekends. Having said that, once you realize his contract is up at the end of the year (like many others), the decision makes a lot more sense – this is his chance to prove his worth.

Jake’s had a tough few years, where he has struggled for results indoors. Finishing eleventh isn’t what he’d have wanted, and considering we’re so late in the season, the top ten is not as stacked as it once was. He’ll be looking for much more next weekend in Las Vegas.

Q: Are we going to see any exciting racing in the 250 class?

A: You know what? We sure did! In fact, it was arguably much better than the 450Sx main. Even without any Monster Energy Pro Circuit Kawasaki riders (when you think back to the first few races of the season, that’s pretty crazy), the racing for the top five spots provided some much needed entertainment.

Jimmy D grabbed the holeshot, and led for the first few laps, with Bisceglia following close behind. Championship elect Justin Bogle had a quiet start, slipping down to fourth, before mounting a charge and hitting third by the end of the opening laps. He ended up winning the race, and will undoubtedly wrap up the championship in Las Vegas, unless Martin Davalos finds a spare ankle.

A: With the depth of the 250 field at this time of year, I thought we might see another surprise podium result, but that wasn’t quite the case. Bogle took the win (predictably), with Jeremy  Martin following in second. Vince Friese took the final podium spot (the first of his career, but he has been right on the cusp for a while). The potential is there for an upset in Las Vegas, just like it was this past weekend.