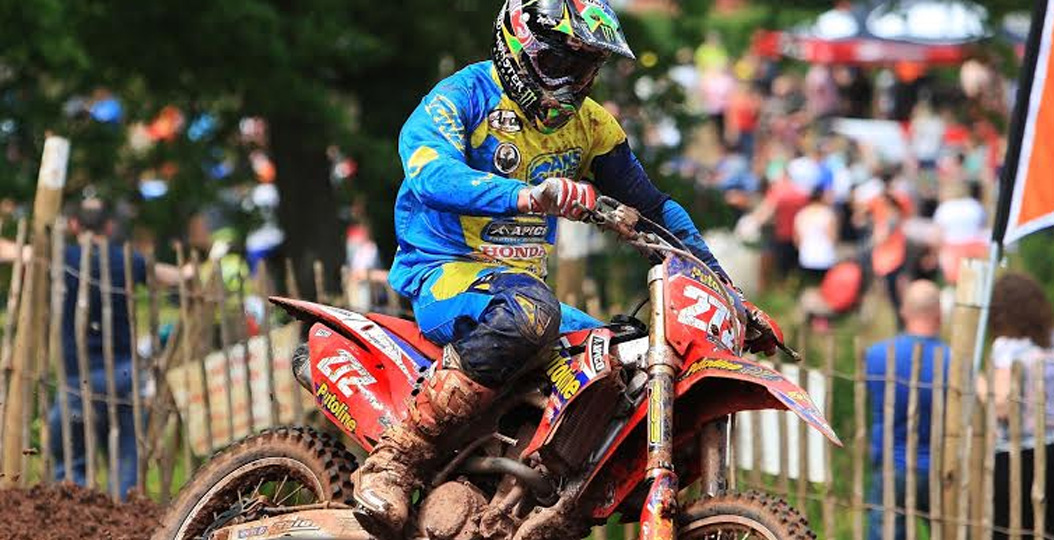 The Putoline Apico Honda race team with both of its drivers took part in a challenging MX Nationals round at Pontrilas last weekend where the wet muddy track conditions played a big part in any of the riders present gaining good results.

The rain had come to the hill side track Thursday night and turned it into a slippy mud bath, but the track officials did all they could to make the event happen by cutting out some of the more difficult sections, plus scraping some of the mud off the more challenging places on parts of the track that had to be used.

The team’s number one rider, Neville Bradshaw qualified seventh where anywhere in the top ten would be good enough for the holeshot start, with there number two rider, James Harrison qualified sixteenth on conditions he is not keen on.

Neville gated fourth in race one on Saturday and kept the risks of crashing to a minimum till the race settled down.

Two of his main rivals in the championship hit trouble, the first was Bryan Mackenzie out with a blown engine, then the Frenchman Steven Lenoir got his bike stuck in the mud after a crash, Neville found himself in second place.

The eventual winner Adam Sterry was too far in the lead for Neville to catch before the end of the race, and with a Honda that was boiling up from mud blocked radiators he eased off his pace and settled for a safe second place.

Track conditions were a lot better for both of Sunday’s races and in the first race Neville started well and was holding third place by the third lap, till first Lenoir, and then an on form and overall event winner Ben Watson found a way past him.

He finished that race in fifth, but pleased with his performance. In the third and final race of the weekend Neville was fifth into turn one but the track had developed into a dry one line and overtaking was almost impossible.

He managed to pass Lewis Tombs on lap one but after that none of the top six riders in the race could find away pass each other and finished in the same order they started the race, Neville notched a fourth place, giving the team a second place overall, but extending his lead in the championship nineteen going into the next round.

After racing was over for the weekend Neville said, “It’s been a good solid weekend as we came to this race with a two point advantage and we are going away with an eighteen or nineteen point lead. I got some great starts which are good as I always struggle with conditions like we had this weekend with the sticky clay and mud. The only real problem we had was in yesterdays race when the rads got filled in and the engine started to boil after a couple of laps, but these Hondas are built well and it kept going till the end, though I did ease off a bit on the last couple of laps. We are off to Foxhill next in this championship and I love it there, so that is something to look forward to”

James had a great start in the first race and held his own in the testing conditions ad finished in a creditable seventh place. In race two James didn’t get the start he wanted and was in seventeenth place at the end of the opening lap but past two other riders by the end of the hard race. James had his worse start of the weekend in the last race but managed to move up five places by the end of the race for thirteenth overall. He said after, “I had a good first race yesterday as the muddy conditions helped me out and I finished in seventh place after a great start. Today’s track condition weren’t my thing really as I don’t like riding the deep ruts, but I am happy with the way I rode and even happier that I didn’t get a ride in the ambulance”