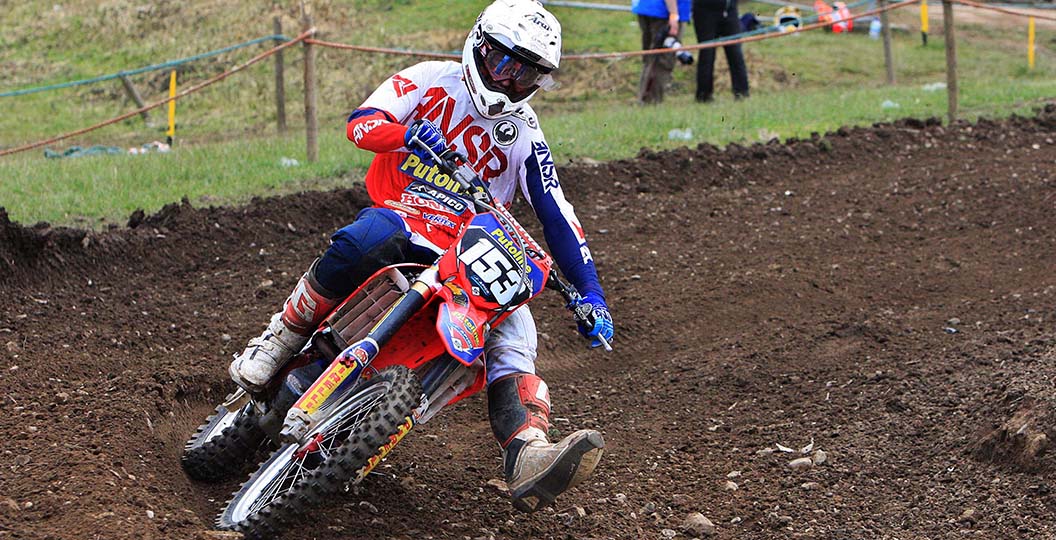 Round five of the Maxxis British motocross championship was a story of two halves for the Putoline Apico Honda team for it’s number one rider Neville Bradshaw had a day he would like to forget as he had to contend with a problem that slowed his racing machine in qualifying and eventually caused an engine failure in the normally built proof Honda in his second race of the day.

While on the other side of the team awning its up and coming number two rider James Harrison had his best championship round ever as the youngster qualified ninth, which put him through to superpole for the very first time, and combined with a eighth place in his third and finial race of the weekend gave him an excellent ninth overall and left him with a very big smile on his face.

Heavy overnight rain had left the Skelder Bank track just outside Whitby in North Yorkshire very wet and slippery, the rain returned as the MX2 qualifying got underway giving the riders all sorts of problems with visibility and track conditions.

Neville qualified seventh, with James just two places behind in ninth meaning the both qualified for superpole where Neville stayed in seventh, but a mistake on his fast lap dropped James down to twelfth place.

At the start of race one Neville gated seventh and was maintaining a good pace on a track where overtaking was a problem. He passed Bryan Mackenzie with two laps to go and finished sixth while James didn’t have such a good start but made his way up from twentieth on lap one to finish eleventh and well in the points.

Race two only lasted four laps for the disappointed Neville as the bikes engine expired while he was in eighth place and pushing Mackenzie. James had started the race after a not so good start in nineteenth place but by the end of the twelve lap race he was thirteenth place. With his bike fixed Neville was in fifth as the pack rounded turn one with James in ninth and in the thick of the action. Frenchman Steven Lenoir crashed on lap three boosting up the teams two riders a place and at the halfway stage Neville found away past the young Adam Sterry for fourth which is where he finished, with James coming home a creditable eighth place.

Although the team where disappointed with the problems they experienced on race day Neville was seventh overall with James ninth which meant in the championship standings Neville is in a comfortable third place but will have to work very hard to close on the leaders with the rounds remaining.

After racing was finished for the day Neville said, “It’s been a tough day with all the heavy rain in qualifying but I managed to get seventh in that and again seventh in superpole witch gave me a decent gate pick come racing time. The bike had been feeling sluggish all day and didn’t feel that good, but in the first race I didn’t get such a good a start but managed to pull my way through sixth behind Matiss (Karro) and Adam (Sterry) by the end of the race. In the second race, about four laps in while in sixth place again the engine let go so we had a very unusual DNF. In the last race of the day I was well on the pace in third and staying with Matiss and Mel (Pocock) when with four laps to go I got a stitch and could hardly breathe so I had to settle for third. We are still in third in the championship but we need to go home now as a team and think about the rest of the races in the championship”

In contrast a happy James said, “Today went very well as I got ninth in qualifying and made it into superpole for the first time, but I messed up my superpole lap and got twelfth pick on the start gate. In my first race I didn’t get a very good start but made my way to finish eleventh place witch equalled my highest place finish so far this year. I finished thirteenth in race two, but in the last race I gated within the top ten and finished eighth, for ninth overall which was great”

The teams next outing will be round six of the Maxxis British Motocross championship at FatCat near Doncaster three weeks time on the 20th of July.