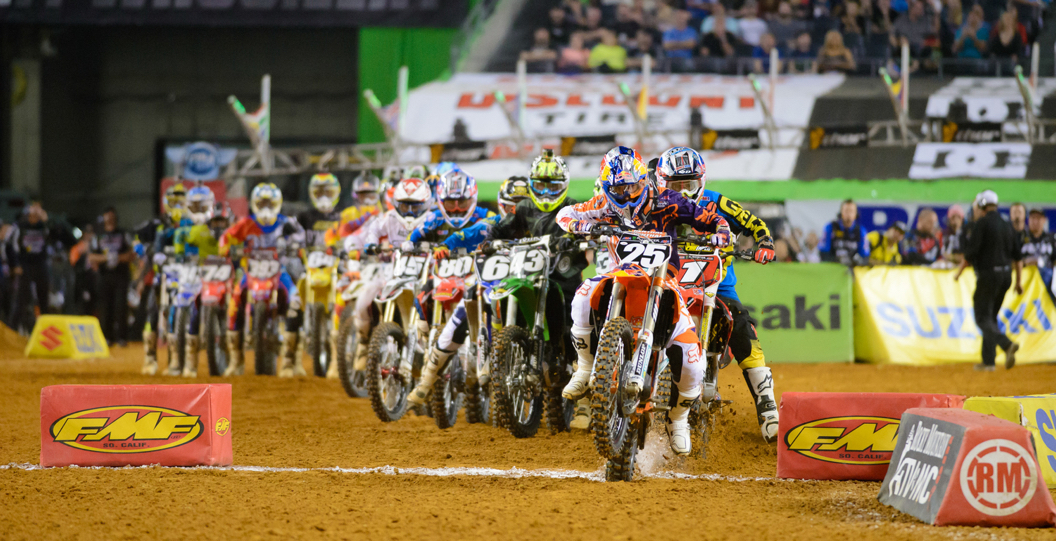 With the FIM Motocross World Championship just around the corner, this weekend is relatively quiet compared to recent ones. However, there are still some MXGP riders that are hoping to put the finishing touches on their pre-season preparation, and of course the Monster Energy Supercross series is in full swing.

Let’s start with the American action, shall we? The very popular Georgia Dome in Atlanta will host the eighth round this weekend, with the typical soft, red dirt. Of course the riders will be back there next weekend too, for Atlanta 2, but Saturday night should see around seventy thousand fans flock to the stadium. But will they see KTM dominate again?

Ryan Dungey has won Atlanta previously, 2012 being the last time, so he has form there. But, then again, so does Ken Roczen (2014 winner). Honestly, I think the race this weekend is just going to come down to who gets the start. The top four are so close in speed! Based on what we have seen thus far, you would be smart to place your money on either Ryan or Ken. However, Trey and Eli are capable of getting out of the gate, it just happens less frequently.

In the 250SX East division, I would predict that it is going to be all Marvin Musquin! The Frenchman proved to be too strong at round one. Why would that have changed in seven days? Of course there are many things that could go wrong or hold him up, but you’d be a fool to bet against him. It’ll be interesting to see what Arnaud Tonus or Martin Davalos can do with a good start; they could shake up the podium.

Now that the races are on the east coast, the action starts a lot earlier for us British fans. At 6pm, UK time, on Saturday evening you will be able to watch practice/qualifying live HERE. Then at midnight, you’ll be able to watch the full night show (if you’re in the UK, Germany or Brazil) live on that link too. Isn’t technology great?

The Amsoil Arenacross series in the US will resume this weekend after a week off. No one has really ran off with the title of favourite yet, as the red plate has been changing hands beneath the Babbit’s Kawasaki tent. Jacob Hayes currently leads with a fourteen-point gap over Matt Georke, the former BTO Sports KTM rider. Kyle Regal is quietly there in third, with Chris Blose in tow. Blose may be the fastest rider, but he has also been wildly inconsistent as well. However, that doesn’t matter too much as the points will be reset very soon as the ‘race for the championship’ really gets underway.

LaCapelle, in France, will host an international this weekend, which a handful of GP stars will be attending. Unsurprisingly most of them will be French (Steven Frossard, Dylan Ferrandis and Xavier Boog will be present, to name a few), but there will also be a few other stars. Jake Nicholls, Shaun Simpson, Adam Sterry and Liam Knight will be representing the UK, with British Championship riders Harri Kullas and Steven Lenoir also present.

It should be an unpredictable event, although don’t expect the riders to push themselves too far in an effort tow in. The same goes for the Mantova Starcross, which is taking place in Italy this weekend. A handful of the factory stars will be present. The Rockstar Energy Suzuki team is scheduled to compete, as is Evgeny Bobryshev and some other MXGP frontrunners.