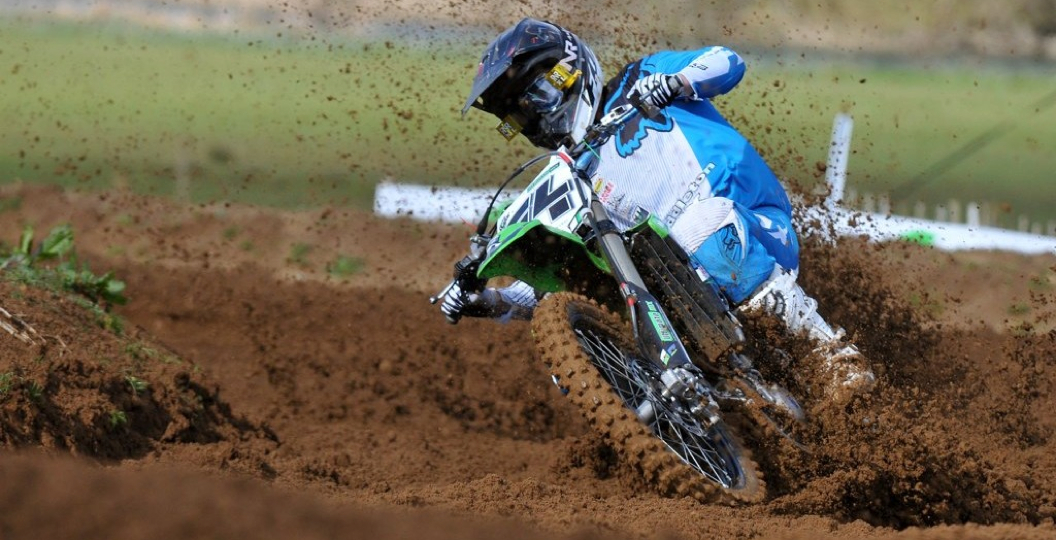 There are hundreds of privateers up and down the country that are desperately trying to make a name for themselves in British motocross. There are only a selected amount of rides on teams available, and with teams disappearing all the time it is only getting harder for the much loved privateers. For the first edition of ‘Privateer Focus’ we talk to Patrick Major, who has been contesting both the MX Nationals and the Maxxis British Championship thus far this year. Major spends a majority of his money on his racing; he has no fancy van, no sponsors and no mechanic. His dad is by his side most weekends and is adamant that he is not the mechanic!

MX Vice: Patrick, how do you think the season has gone for you so far?

Patrick Major: It’s been a mixed year really, I’ve had ups and downs, but it started really well with the MX Nationals at Culham, where I rode really well. I progressed throughout the weekend and got a twelfth, which I was really pleased about. I have had a few crashes this year, and had a setback when I injured my shoulder, but things seem to be getting back on track. I’m trying to have fun and stop pressuring myself, which seems to be helping. Canada Heights for the MX Nationals was mad! We had so many problems there with the gearbox going, as well as the clutch and shock , but we managed to pull it together and have a decent third race, even with two crashes! Weirdly enough I put my fastest lap in on the last lap of the last race and caught quite a few people, so I’m pleased with my current fitness.

MX Vice: What does a usual week consistent of for Patrick Major?

Patrick Major: I work at Rolls Royce in Derby, where I put in my thirty-eight hours a week. I have two hours of travel time a day to get to work, which means I have to be up and training at 5.30am each morning. I hit the gym at 6am everyday and go to work after, work until 5.30pm, go back home for 6.30pm and then start work on the bike for the weekend, order parts. It requires constant maintenance in the evenings to make sure it’s up together. In the summer I can get out for an hour after work in the week, which helps.

MX Vice: We’ve seen you at every MX Nationals round with your dad, is it a cool thing to get away and spend time with him at the races?

Patrick Major: Yeah definitely, but both of us have agreed we need someone else to take over the mechanical side for the moment! He has been great, my number one fan, so supportive and I wouldn’t be here without his support.

MX Vice: We noticed your results have been quite different between both championships, is there a reason?

Patrick Major: Yeah the Maxxis British Championship has not been good for me this year. I did have my best ride at FatCat, but I was actually disappointed with the result. FatCat is my favourite track, I love riding there and the conditions really suited me, but I think I have been putting too much pressure on myself at the British and I think that’s the problem.

MX Vice: Going back to the MX Nationals, a lot of riders have said that the tracks are the roughest and toughest they have rode this year, would you agree?

Patrick Major: Yes one-hundred percent! There are quite a few big bikes ripping around here and not grading the track on a Saturday night really helps. Culham at the start of the year was the roughest track I have ever ridden hands down, that’s because they left it. The track prep beforehand was awesome as it was really deep and it got rutty. Sunday it had gone hard pack so you had all the wavy bumps and square edge bumps, it was crazy but in a good way. I love those conditions and they bring out the best in me as I really enjoy riding them.

MX Vice: Do you know what you are going to be up to next year?

Patrick Major: The MX Nationals and the Maxxis British Championships definitely, for me it is all about bike time, but riding against the fast guys is the only way to improve. I came into the sport really late so its important for me to get as much bike time as possible against these guys at this level.

MX Vice: You came into the sport late?

Patrick Major: Well, not really late in regard to age, but we could never really afford to run at the level that I’m currently at. It was only when I got a full time job that it enabled me to step up the racing, get a newer bike and to be able to race more. I actually started to ride properly when I was seventeen, and that first year was really tough as all we had was mechanical problems in the BYMX. I had about six months off the bike with mechanicals, so it wasn’t a great first year. 2014 is really the first year I can actually say I’m doing this properly, as I can finally afford to run the bike at this level due to being fully qualified at work and being paid a bit more. So this year I can afford a new clutch, take myself out a few times in the evenings and give it a really good go. I love riding and I’m just going to have fun and do my best each week.