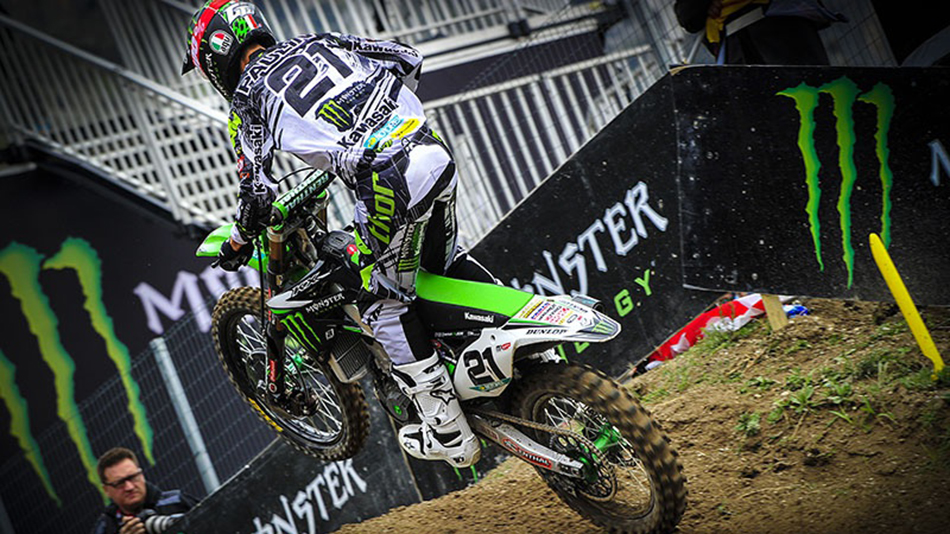 SEVLIEVO (Bulgaria), 16 April 2014 – The circuit of Sevlievo, located 180 kilometres northeast of Bulgaria’s capital Sofia, is one of a small handful of tracks on the calendar where spectators can see a vast majority of the action while standing in one spot. As a regular fixture on the MXGP calendar for the last eight years, the spectator friendly circuit of Sevlievo will host round five of the 2014 FIM Motocross World Championship this weekend.

In addition to the MX2 and MXGP action, Youthstream’s ultimate stepping stone into MX2 racing, the European EMX250 Championship, will kick off this weekend alongside its brother classes, the all newEMX300 two-stroke class and the youngsters of EMX125. While the EMX300 will be making its debut, the EMX125 will be lining up for round two where round one’s winner Red Bull KTM Racing’s Davy Pootjes will be looking to bag yet another perfect score.

Rockstar Energy Suzuki World’s Clement Desalle finally got the ball rolling last weekend, banking his first MXGP victory and making up fourteen valuable points on the series leader Antonio Cairoli. After moving into second in the overall standings, there is no doubt the Belgian has his eyes on the prize and is hungrier than ever for that MXGP red plate.

Meanwhile, a win is on the horizon for Yamaha Factory Racing’s Jeremy Van Horebeek as he continues his climb to the top. After a second place overall last weekend at the MXGP of Trentino, Van Horebeek knows a victory is within reach. “I want to win, but it is easier to say I want to win than to go out and do it. Anyway, I think it will happen, I know my fitness is good because I was riding just as fast at the end of the race as I was at the start, so I will just keep working hard and it will happen,” the realistic Belgian said.

Rockstar Energy Suzuki World’s Kevin Strijbos has been showing moments of brilliance this year, already bagging a couple of qualifying heat wins. While the speed is there on Saturday, Sunday’s racing has been playing another tune, which has raised the question “Is the Belgian’s hip (an injury he got over the winter) giving him trouble the following day?” Strijbos responded last weekend when he took his tenth place qualifying result and turned it into a third overall for the MXGP of Trentino, which could be a sign he has fully recovered and is not ready to settle for anything less than the podium.

Let’s see if Team HRC’s Max Nagl can shake his new nickname ‘Mr. Consistent’ which he has received after hovering around fourth consistently for the last three MXGP rounds.

MXGP of Trentino proved that Antonio Cairoli is human after all. After a disappointing fifth place, the seven-time FIM Motocross World Champion will be ready in Bulgaria to dust the dirt off his shoulder and try to snatch back those lost points. When asked about his lack of wins on the circuit of Sevlievo, the friendly Red Bull KTM Factory Racing rider replied, “I think I have won there before, maybe in MX2 like a decade ago,” he laughed, “but you know, I always try to win and you never know what will happen, so we will see”.

Meanwhile, if the statistics are anything to go by, everybody’s money will be on Monster Energy Kawasaki Racing Team’s Gautier Paulin since he has consecutively won in Sevlievo for the last two years. As if that wasn’t daunting enough for his competition, the stylish Frenchman has also ripped fourFOX holeshots in succession and he is coming into this weekend extra fired up after a perfect 1-1 score at the MXGP of Trentino slid through his fingers thanks to a stone cracking his crank-case and forcing him out of the race.

It would appear the MX2 class has upped the ante this year with already two riders to of beat the once very dominant MX2 World Champion Jeffrey Herlings fair and square. While Red Bull KTM Factory Racing’s Jeffrey Herlings has in fact won every Grand Prix he has attended since the start of 2013, it seems the Dutch sensation is struggling, at least by his standards, this year to win races.

“At the moment my speed is not good so I’m giving the other guys a chance,” Herlings said at the press conference in Trentino, “I haven’t had much time on the bike this year, I have been injured and then I was sick after Thailand with a virus and then I was injured again. But this week I will ride as much as I can and hopefully be faster in Bulgaria”.

The MX2 red plate still belongs to CLS Kawasaki Monster Energy’s Arnaud Tonus who despite getting second overall, he wasn’t too happy with his riding last weekend in Arco di Trento. It will be interesting to see the Herlings, Tonus showdown when both riders are riding how they feel they should.

Meanwhile, Rockstar Energy Suzuki Europe’s Glenn Coldenhoff has two race wins under his belt and is picking up momentum quickly. If the Dutch sensation could put together two results which reflect his ability as a racer rather than just one, he could just be the biggest threat to the MX2 championship.

Standing Construct KTM’s Valentin Guillod shocked everyone with his speed in Arco di Trento. With the confidence from his solid lap times, qualifying heat win and fantastic result, the 2013 EMX250 European champion will be looking to back that ride up this weekend in Sevlievo.

Meanwhile Wilvo Nestaan Husqvarna Factory Racing’s Romain Febvre has become the dark horse. The young Frenchman can match the pace of the front-runners and when he has a race with little error, he is more than capable of being on the box.

As for Red Bull KTM Factory Racing’s Jordi Tixier, a lot of people are left scratching their heads. The young Frenchman was the solid bet for second place last year, yet sixth has been his best result so far in 2014. After taking home second in Sevlievo in 2013 with a convincing 2 – 2 result, this weekend might just be the turn around Tixier’s been waiting for.

Flying the flag for his homeland, Kemea Yamaha Racing’s Petar Petrov still feels he has a lot to prove this year. His team have gone on the record to say the Bulgarian is capable of a top five, and Petrov himself has proved it when he took fourth overall at the MX2 Grand Prix of Benelux last year. This weekend Petrov will have his buddies and his family in his corner and it would be nice for him to show his home country everything he has learned since moving to Belgium at a young age.