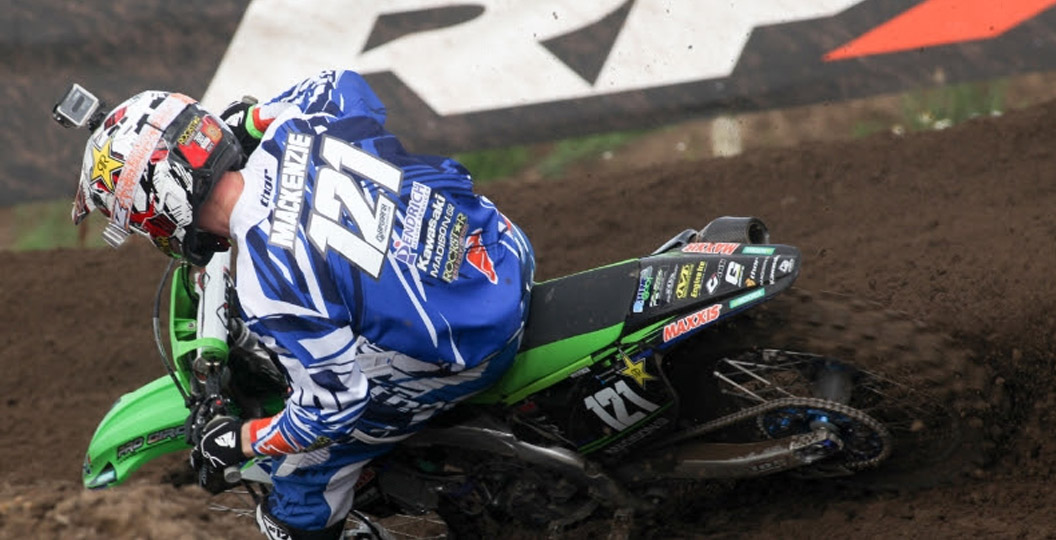 Pendrich Kawasaki leaves Preston Docks with a pair of nines

The penultimate round of the MX Nationals went to Lancashire this past weekend to stop by the well-known Preston Docks facility on the River Ribble. With just this and another round to go, Pendrich Height Services Kawasaki hoped to shorten the points gap to the lead, but it was unfortunately not to be.

Saturday is traditionally the day for qualifying and one race, but with medical cover unavailable until late in the day, the organisers were forced to let only practices run for all classes. For MX2 rider Bryan Mackenzie, the eventual qualifying session late on Saturdayafternoon delivered a fourth place, while his younger compatriot, Lee Perfect, qualified tenth in the Under 16 class.

Sunday however dawned to bright sunshine and race time. For Bryan, the first race got off to a reasonable start around the tight right-hander. With everyone eager to race, the pace was fast and furious, and Bryan pushed hard to move up into fourth with a lap to go. Nemesis Nev Bradshaw snatched the place away from him with just corners to go, leaving him fifth.

The second race of the weekend again got underway in seventh, but this time Bryan got up into the top echelon much quicker. After a strong battle with Bradshaw, Bryan found himself in second, only for his rear end to step out and off the track on the last lap, high-siding him off the bike and out of the top ten. Eventually remounted, Bryan had to make do with a thirteenth place and a ninth overall on the day.

Lee also didn’t have the best of weekends. A big crash on Saturday during practice left him with a hip injury, which made work very hard on Sunday morning. Still stiff, Lee got off the gate in mid-pack for his first race, and a steady race in ninth followed. As the day wore on, Lee limbered up and improved his positions in the second race with a start in eighth and a steady climb to sixth by mid-race. He raced his own race there to the end. The final race had Lee back to his normal self; a start in sixth got him into fifth very sharpish, from where he tried hard to keep the gap in front of him to a minimum, ending in fifth for a ninth place on the weekend.

Mark Perfect: What can I say about this weekend? Basically not commencing racing on the Saturday didn’t help the morale of the boys, it was so mixed up and we didn’t really know what was happening. On Sunday we started reasonably well, we had done all the hard work that needed to be done as far as Bryan was concerned, everything was there, the podium was in sight and then just some silly mistakes meant we ended up where we did, which was not the most ideal situation. I can’t fault the riding or the preparation, just a bit of bad luck. In qualifying, Lee hurt his hip and he’s been struggling all weekend with it. He’s been very glad to even finish the races, because at one point we weren’t even going to ride. So, he’s done well to go riding and get the positions that he did.

Bryan Mackenzie: The whole weekend has been pretty awesome, barring a few things: the whole thing on Saturday, my starts, the last lap crash and obviously the overall result. Other than that, I had a great weekend. I was going fast  on the bike and at the pointy end of the field. Unfortunately my starts let me down though and I had to fight hard to get into the race I needed to be in, but I did get in it, done the job and got past Neville, in both races. In the last one, we were going to finish second in that moto, but with three quarters of a lap to go, with the way the track is built up a little off of ground level, the backend dropped off the track and high-sided me big-time. I don’t know if that was an accident on my behalf or wether the track just gave way because I was too close to the edge, but it happened so quick and next thing I was lying on my head. It was a tough pill to swallow, all the hard work I put into that race, going at it with Nev and coming out on top. With that result it kind of sucked, but the actual racing between us was awesome, and I’m gutted to have had to give up so many points in the championship.

Lee Perfect: The weekend never went to plan. Saturday was a bit of a mess due to the ambulance and paramedics not turning up but it actually played in my favour. I crashed pretty big and thought I damaged my hip pretty bad so I strapped it up and sat Saturdayout. Sunday went better than I thought! The first race I got a pretty good start but slide out in the first turn so I was battling through the pack. Eventually got myself into eighth. Second race was a bit better, with a mid-pack start and pushing through to sixth. The last race was good! I had a fairly good start, made a few good passes and got myself into fifth. Overall it was an okay weekend; I’ve definitely had better but am still pushing forward