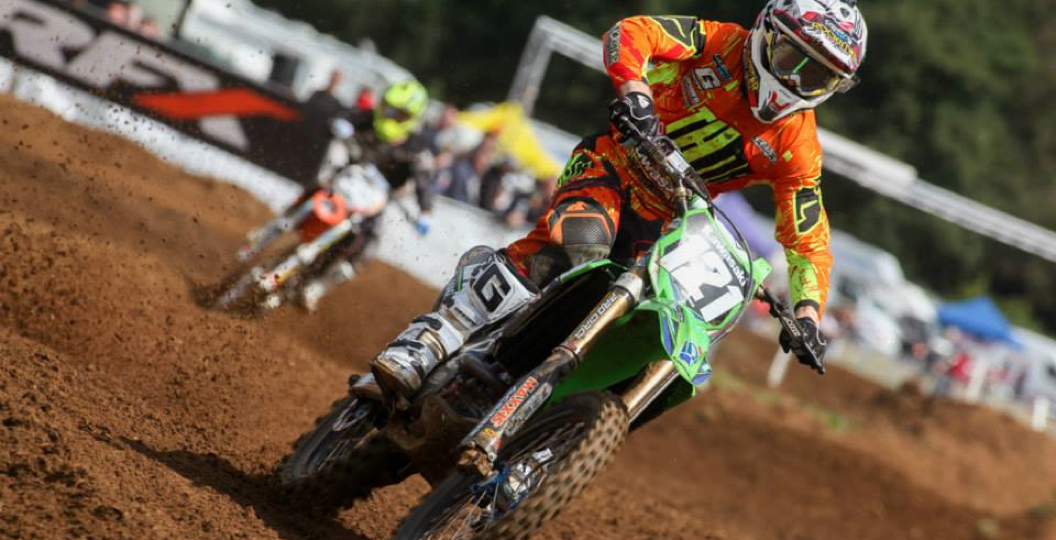 It was yet another long trip from Scotland back to Oxfordshire for the sixth round of the MX Nationals at Culham. While the series has been to the venue before, some changes were made and the paddock shifted to the river’s edge, making for a nice change in scenery.

The intrepid Scots went on to put their mark in Saturday’s qualifying sessions; wee man Lee on the Big Wheel 85 qualified fifth, his best to date, while big man Bryan put the quickest lap down in the MX2 class. Ross on the big KX450F clocked in a good lap too, ending twelfth.

Lee arguably had his best results so far this season. While the first race didn’t get off to the best of starts, Lee made quick work of his rivals before settling into sixth to the end. Later on Saturday, the second race saw Lee have a flawless race in fifth throughout. Sunday morning saw him off the start a little slow again, but once again he quickly worked his way to fifth before being unable to make any more progress and finishing in that position. The final race was another solid race, albeit in seventh place. All points tallied up, he finished the weekend fifth and solidifying his place in the championship just a little more.

Bryan had a fantastic weekend. Riding the high of a good qualifier, he got out of the gate for his first race in the front with some serious competition. On a fast and tricky track, he slowly reeled in two other rivals to end third after half an hour’s hard work. Sunday morning saw Bryan get back in the fray in the front again, this time leapfrogging to second for the first half of the race. In the second half he was made to concede his place, ending the race third again. The final race arguably had the team in fits. Grabbing the lead, he completely ruled the race, slowly widening the gap to his nearest competition. A mid-race fall reduced the gap somewhat, but the race winner was still the green 121. With that, Bryan took the overall win on the weekend as well, reducing the gap to the championship lead by nine points.

Despite the most positive qualifying session ever, Ross just didn’t have luck on his side. His race ended but yards from the start gate after a wild crash took him out of contention, leaving him with a severely fractured foot and a somewhat painkiller-dazed disposition for the remainder of the weekend. Bummer does not quite describe the mood, but at least he’s already been seen by specialists and already on the mend.

Commented team principal Mark Perfect: This weekend was obviously fantastic to get a win and I’m very happy with the way Bryan rode. He showed a lot of aggression and consistency, was top qualifier, won a race, top three in both other motos, excellent. Lee had a fantastic weekend as well. It was great to see him riding well, it’s his best qualifier and his best overall so far. It’s a great progression for both riders and I’m really pumped with how they rode this weekend. On the other hand we had a bit of misfortune with Ross. He’s got a really sore foot, but at the end of the day it’s racing and there’s nothing we could do about what happened. He was showing form too, top twelve in qualifying, which was a great start for him, and we had great expectations, but unfortunately injury came and that was the end of the game for him.

Ross Rutherford: Qualifying was good, I enjoyed it, went pretty well and was looking forward to the race. Then on the start Clarkey crashed into me and that was the end. I have a compound fracture in my foot that we’ve had operated on on Monday.

Bryan Mackenzie: The goal this weekend was to make as many points up on Neville in the championship as possible, and at the end of the day we’ve achieved that. We got another overall win, which was good, and I won the last moto and backed that up with solid results in some really difficult races before that. In the last race I just got a better start, managed to get in the lead on the first lap and put my head down. I stretched out a pretty decent lead and even had a tip-over mid-race but recovered. So yeah, it’s been an ideal weekend.

Lee Perfect: The weekend went pretty well, I started in qualifying and got fifth, which is the best so far this year, had four solid motos through the weekend, rode pretty solid and had some pretty good battles throughout each. It resulted in a fifth overall, which is the best I’ve had so far.