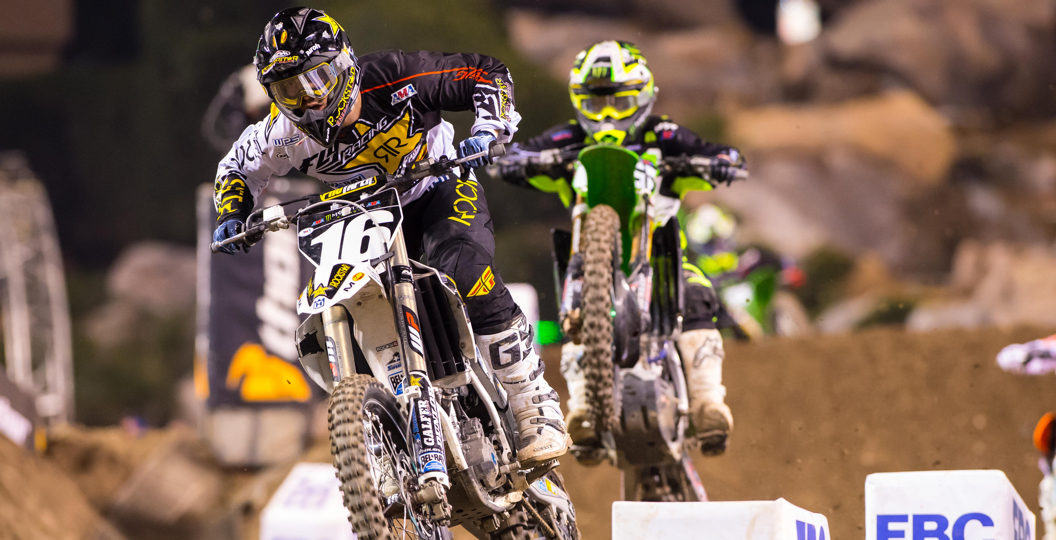 Osborne fourth at A2

Anaheim’s Angel Stadium played host to the fastest dirtbike racers in the world for the second time this season, as Supercross made its way back to California for the third round of the 2015 series.

Zach Osborne, this week’s fastest 250 qualifier, displayed some serious speed at Angel Stadium. After finishing fifth in his heat race, his Rockstar Energy Husqvarna Factory Racing FC 250 pulled the holeshot in the 250 Main Event. He stayed in contention as he battled in the top five for the remainder of the race. He crossed the finish line in fourth place.

“Today was good,” said Osborne. “I had great speed in practice, and did OK tonight, but I had a little issue with my thumb in the heat race. I rode through it in the main. It’s a tough situation but it’s getting better day-by-day. I’m headed in the right direction. My bike is good and my fitness is good. Everything is going well.”

Jason Anderson was all business in his heat as he and his Husqvarna FC 450 advanced from seventh to a fourth-place finish. He was faced with a bit of bad luck in the 450 Main Event as he was pushed to the back of the pack after getting caught behind another rider’s crash. He charged ahead and steadily climbed to seventh by the end of the race.

“My night was alright,” said Anderson. “The beginning of the day was good, but when it came to game time I felt like I was up there but just had some unfortunate luck. I’m just going to try and keep moving forward. I feel good, and I just need to keep doing what I’m doing and I’ll be up there.”

Zach Bell pulled an impressive start in his heat race aboard his Husqvarna FC 250 and followed through with a sixth-place finish to transfer into the 250 Main Event. In the Main, Bell succumbed to an injury stemming from an incident that occurred during his qualifying race. He pushed through the pain to finish 19th.

“Practice went well,” said Bell, “I just rolled my ankle. I had a good start in the main event but had an incident with another rider, which put me in the back. It’s hard to do well when you’re fighting from the back. I look forward to showing everyone what I can do next weekend.”