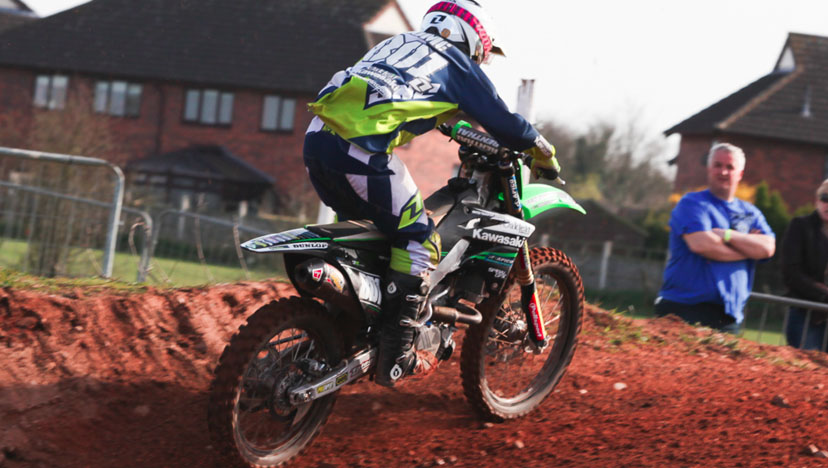 Oakleaf Kawasaki Academy riders Tom Hume and Ben White made their way to the second round of the GT Cup National Championship at Wilden Lane just outside Kidderminster this past weekend. Although heavy rains fell throughout the night, the sandy track was in prime condition on Saturday morning for qualifying, and the weather continued to be perfect for racing on both days.

In the Youth Lites, Hume quickly got to grips with the track, qualifying seventeenth, while White qualified twenty-eighth in the Small Wheel 85 class.

For Hume, the weekend ended in eighth, an improvement on the first round several weeks ago. Despite three starts outside the top ten, he was soon mixing it up near the front of the pack, and it was his consistency in his races that made good for a crash that cost him a potential sixth place.

White’s weekend was marred by several spectacular crashes. His best start in ninth ended in the dirt, but several consistent races made up for it. Despite the obvious setbacks, he showed grim determination to finish each race, albeit some positions down from where he wanted to be, ending the weekend in twenty-fifth.

In qualifying I didn’t get what I wanted; I was a little far behind in twenty-eighth. I had a few good starts through the weekend, so that put me up there. In the first race I crashed three times and was thirty-second, and in the second I didn’t get the start I needed, worked my way through the pack and finished twenty-first. Last race on Saturday was just so rough you just couldn’t hang on really, but I got a good start and just dropped back. I finished twenty-sixth but was really tired. First race on Sunday I didn’t exactly get a good start, pulled through but had a big crash on the hill and high sided down, hurt my wrist again and my head, but I was able to recover quickly and finish. My last race I got a fifteenth off the start, and finished in the early twenties.

It was a good weekend! I think I had a tenth in the last race, I had a couple of top tens and some just outside, like elevenths, so it’s been a very consistent weekend.