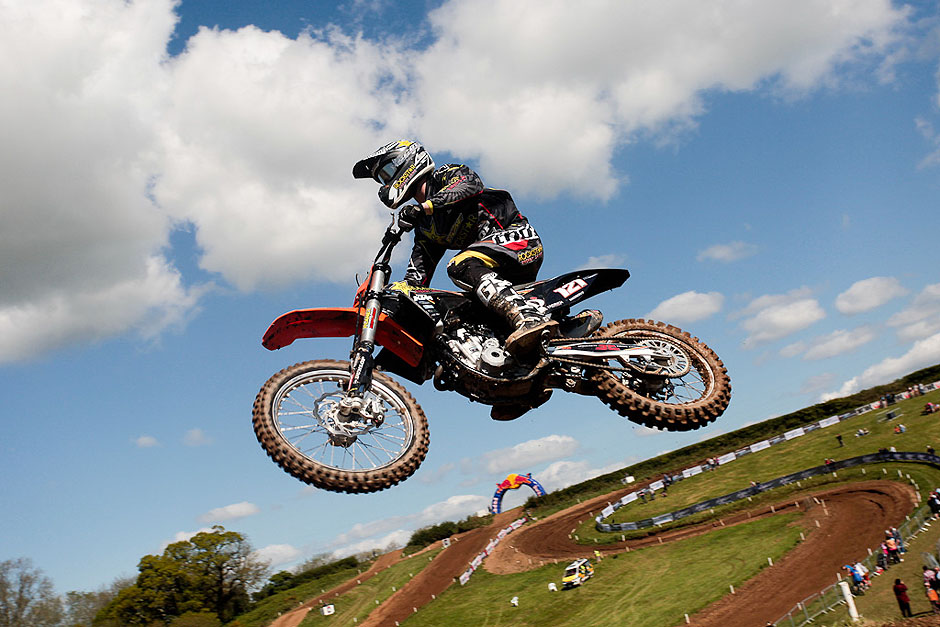 The season opener for the Red Bull Pro Nationals at Landrake in Cornwall was supposed to have been an all-team affair for Rockstar Energy KTM, but after weather and paddock conditions forced the rescheduling thereof to this past weekend, the team found itself having to make the difficult decision to split into two to not only send riders to the third round of the Scottish SMXF Championship in Rhynie, but also to fly the flag at the season opener down south in Cornwall. And so Bryan Mackenzie, together with mechanics Bryan Connolly and Sean MacDonald, made the long journey to the other end of the country to find excellent conditions in bright sunshine and with a brisk breeze.

Mackenzie made a strong statement in the morning’s qualifying session by qualifying on pole in the MX2 class, and also hoped to follow this up with a great first race, but it was not to be. Getting off the mixed start just outside the top ten in eleventh, Mackenzie soon found himself in sixth, but pushing hard for fifth cost everything. Restarting at the back of the pack, Mackenzie faced a long uphill battle on the fast circuit, approaching the top ten with two laps to go. Another crash dropped him another two positions to end the race in fourteenth.

The second race was much improved. Getting off the gate and through the start corner chicanes in third, Mackenzie soon moved into second. Under pressure from Yamaha rider Lenoir for much of the race, Mackenzie found himself in a three-way battle for his position with two laps to go. In the last lap, a last-gasp manoeuvre gave him sufficient breathing room to retain third place in the class for a sixth overall on the day.

Commented team principal Darren Wilson: “With the team split in two as we try to give our sponsors the exposure both north and south of the border, it was Round 3 of the SMXF Nationals and Round 1 of the Red Bull Pro Nationals at Landrake. Bryan put the Rockstar Energy KTM on pole and I was real happy for him but it seemed to work against him in race 1, race 2 seemed to be a bit better for him, but it’s not what we want or what he wants either. I have had a chat with him and we both know what’s needed to progress to challenge for wins. Bryan is a true professional who wants to win and I’m sure he will do what is needed.

“North of the border, Shane, Pete and Mark set about the Scottish Nationals MX1 and MX2 Championship this weekend. Shane is now leading both championships on his 250F Rockstar Energy KTM which I am pleased about. Mark is sitting 2nd in the MX2, Pete is sitting 4th in the MX1. I am looking forward to Round 4 of the Maxxis at the end of the month; we have some fresh ideas on how we will improve the team and the bikes for this race, we simply will do what it takes to put our team at the front. A big thanks to all our mechanics for their efforts, lads, nothing goes unnoticed.”

Bryan Mackenzie (#121): Today was just crap. I wanted to leave here as someone in contention, and right now I am not. The track was awesome and the weather was good, qualifying was pretty sweet and I was on pole in MX2. In the first race, I was deep in the pack, was fifth or sixth in the MX2, but I didn’t know that, so I went a bit hard at the start. I was a bit too aggressive, fell off, had to stop and straighten my handlebars, then fell off again and finished fourteenth. The second race was just much better; I stayed off the ground, and kept ahead. I was second MX2 for pretty much the whole race, but in the last lap Lenoir and Bradshaw passed me because I was trying to make passes and it was to Lenoir’s advantage. He dove inside of me and got me.