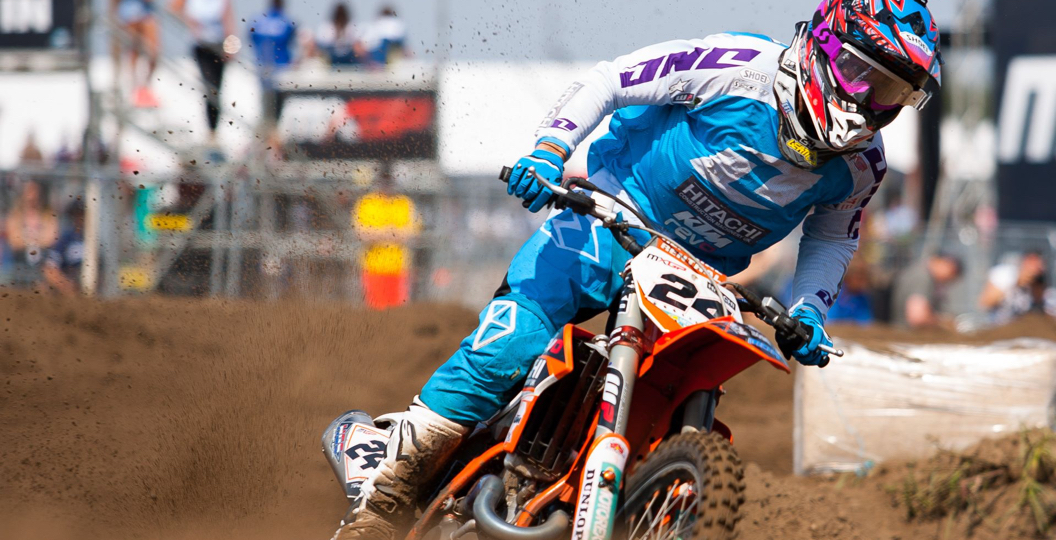 Shaun Simpson: “Probably, yeah. It’s been a long time coming. I got close back in 2009 at Valkenswaard, in the sand there. I just burnt out in the second moto, as I had a small injury before. It cost me a lot. I always think about that day, when I should have had a perfect day. I don’t get them very often, so I wanted to grab this opportunity with both hands and there was no way I was going to let it slip today.

“The first moto went more or less to plan. I maybe wasn’t the fastest guy out there in the second race, but I planned it and knew I could last the distance. What wasn’t on the script was the little crash. I just landed in the soft stuff and high-sided; I don’t think I’ve ever got off the ground so quickly! I nearly brunt the clutch out trying to get going and did the last two laps with my peak down almost in front of my goggles. I felt like a right goon, but managed to get it done.

“This is definitely the roughest I’ve seen Lommel. It was a lot softer than what it is when we train here. It’s nice to see, I would call this real motocross. There were plenty of bumps, plenty of places to pass, sprint laps and guys tiring out. It’s something we don’t get to see very often, normally most guys are within a fraction of a second and exactly the same speed. This is such a great contrast to what we’re used to, and enjoyable for me anyway.

“Yeah, it does. These guys gave me a run for my money today. I’ve seen these guys practicing here, so I know they have done their homework too. It’s not a surprise to see them sitting next to me. It’s a pleasure to be sat between them, for the first time in my career.

“I would say that it [the quad] was harder this year, to be honest, especially yesterday in the practice sessions. It was actually easier to do the quad as the race developed today. You could land where no one else was landing and double, double out, although it much softer. I think it was worth a second and a half, maybe something like that, it felt that way to me. That’s why, even after I crashed, I just carried on doing it.”

Gautier Paulin: “Like Shaun said we are always training here. I can see Romain train. I can see Shaun train; we make some motos together when we are training. The track was pretty tough. I hurt my right knee in the first moto at Loket. Yesterday was tough for me in qualifying. I had to push my body to the limit. This morning I said ‘just push one hundred percent’ – I was feeling good. I want to thank HRC Honda, because we made a big step with the engine. I was feeling good and enjoying the track.

“I was in some pain in the second moto. Shaun deserved his win; the only way to catch him was to go for it. My mechanic showed me that he was four seconds behind, and he kept pushing. At one stage I didn’t want to hurt myself, I continued to push one hundred percent.”

Romain Febvre: “You know; I’m happy overall for sure. In the first moto I felt really good and was really close to Shaun. I crashed once, then for a little bit after I lost some feeling and speed. Two laps later I was better and crashed in the waves section once more. I used a lot of energy to get back again, because after my second crash I was a little faster than Gautier. I couldn’t pass him though, so I used a lot of energy for nothing. Two times third is a positive weekend for all of the team and myself.