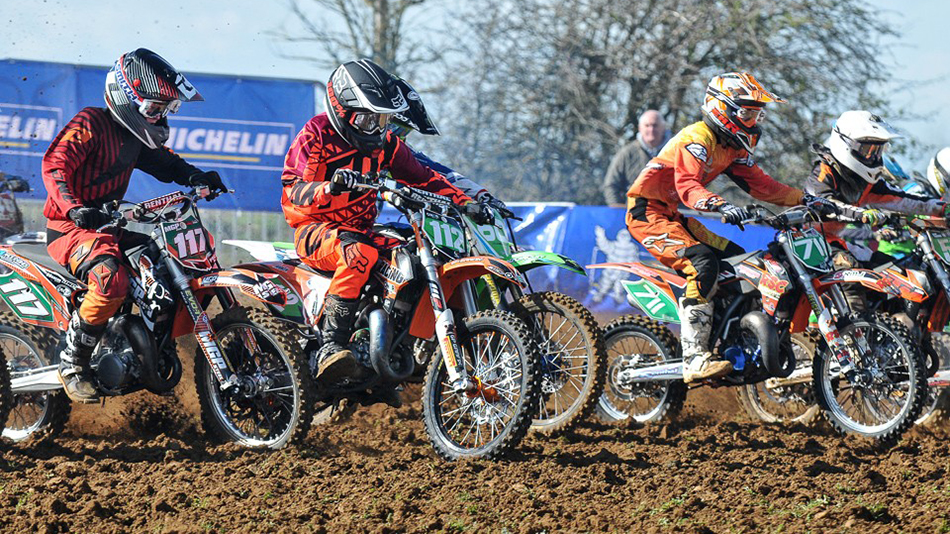 The UK’s newest race series did not fail to provide some great racing at round one. Specifically, the Under 15 class was stacked with talent throughout the weekend! The challenging circuit that became “a proper rough, old school track” according to Neville Bradshaw definitely showed the riders what is in store for the rest of the series.

The idea and concept behind the MX Nationals is to give riders the opportunity to ride the tracks that the pro riders race on, so that they can shine in front of the team managers. It also helps equip them for the future, by providing a pyramid structure to get to the top.

At the MX Nationals, the classes offer you a stepping stone through the levels that you can at, whether it is for fun with the clubman, or working from the Under 15 class, through MXY2, and into the pro class.  At each step the class will get harder, the races get longer and the racing is more competitive, as there are higher stakes. We want the riders to develop, and this series will help them do that.

Round one produced some exciting racing throughout the Under 15 class; the strength and depth to the field meant that any rider from the top ten qualifiers was capable of taking a race win.  The many potential winners included Keenan Hird, Marcus Phelps, Aaron Booker, Alexander Brown, Brett Pocock, Jed Etchells, Harry Wichman, Lee Perfect, Dylan Woodcock, Dexter Douglass, Callum Green and Sam Price.

After eighteen minutes of solid racing, the top eight were split by thirty-five seconds. Throughout this eight round series, the guys mentioned above will be fighting for race wins.  Unfortunately, Aaron Booker dislocated his hip at round one, so he will be absent for a few rounds, until he is fully recovered.

There are a whole host of other names in the MX Nationals to look out for at round two. Our eyes are on Jack Bintcliffe, who has been racing for only eighteen months and is now coached by RMJ.

Kawasaki have started a massive fight back with the new 85, as they have Woodcock, Etchels, Perfect, Preston Williams and Lewis Hall all riding it. Woodcock showed just how competitive the bikes are with a brace of wins on the Sunday at Culham.

Keep a look out for Gary Ashley, who will be looking to mix it up at the front, along with Troy Jones, Ben Burridge, Jack Carpenter, Sam Roberts, Callum Crossland, Declan Hunter, Joe Cadwallander, Oliver Cook, Harry Smith Jason Connor Smyth, Bradlet Flagg, Will Digby, Joeseph Dent, Mac Burdett, Jamie Clark, Albie Wilkie and Tom Murphy. It’s looking like another full line up will be reached by the weekend, and there is some great racing ahead.

The MXY2 class also provided us with some extremely entertaining action at round one of the MX Nationals, and we will undoubtedly see the same in the deep sand of FatCat this weekend. Unfortunately, Todd Kellett (an early favourite for the title) succumbed to injury back at Culham, and will be out of action in the coming weeks. But, there is still an influx of hungry riders that will be looking to take control of the series this weekend.

Liam Knight currently leads the series, following a very consistent performance at round one. In a field as stacked as this, consistency is a vital tool to possess. Josh Gilbert is currently second in the series, and nipping at Knight’s heels; you can expect these two to be battling it out at the front again. Henry Siddiqui will be right in the mix of things, as will Callum Whaling, and many other riders! Of course, the track alone will be a huge factor for the riders, as only the best will conquer the rugged circuit.