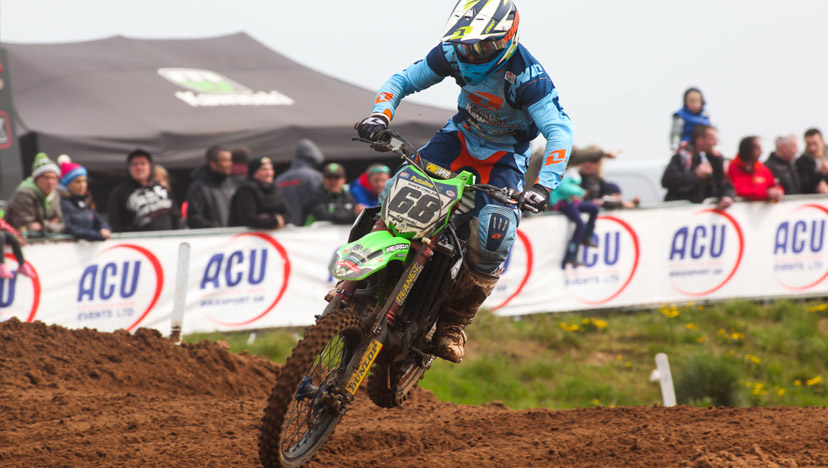 While most people would enjoy their Easter bank holiday weekend by relaxing at home or somewhere exotic, it’s been all hands on deck for Oakleaf Kawasaki. The two Oakleaf Academy riders Tom Hume and Ben White travelled to Warmingham in Cheshire, while the two adult riders Priit Rätsep and Shane Carless made the trip to Fat Cat Motoparc just outside Doncaster. AMCA championship rider Luke Mellows stayed local by travelling up the M5 to Bromsberrow in Gloucestershire for his Southern Qualifier.

In Warmingham, Tom got off to a good start by qualifying tenth in the Youth Lites class. He then followed that up with a twelfth in his first race. Although the second race of the weekend ended in the back of the pack after a mechanical malfunction, the weekend’s races ended in the top fifteen with an eighth place, an eleventh and another twelfth, giving Tom a fourteenth place overall.

Over in Yorkshire, Priit and Shane shared the same qualifying session and found themselves in pole and twelfth overall respectively. Priit then continued his run at the front of the pack in the late afternoon, finishing a consistent fourth. On Sunday afternoon after a good warmup session in the morning, Priit continued to impress spectators by finishing fifth on an increasingly challenging track. He then finished the last race of the day in third for a second overall on the weekend.

Shane was not that far behind either. Although he continues to tweak the bike to suit his style more, he finished the first race in a solid twelfth place despite a crash in the first lap. Sunday afternoon continued the trend with Shane clocking up another twelfth place in the second race. He followed that up with a tenth from a start in sixteenth in the final race of the weekend. The three results added up to a handsome overall tenth place for Shane, a definite improvement over the first round several weeks ago.

And finally, Sunday morning’s qualifying session in sandy Bromsberrow put Luke second in the MX1 class, a great start to the day. The first of three races didn’t get off to the best of starts after hooking bars off the start, but Luke quickly pushed his way to the front for a finish in third. The second race was Luke’s from start to finish, and the third, despite another tough start, also ended well with a well-earned win. Taking the overall win on the day also gave Luke a comfortable position to qualify for the AMCA championship.

The weekend wasn’t too bad, I had two weeks off because of an injury to my knee, but no excuses. In qualifying I managed to get sixth in my group which was twelfth on the gate choice. In the first race we had a problem on the start, I missed the flag and had to fight my way through and finished twelfth in the first race, in the second race I had a pretty decent start but struggled with arm pump in the first few laps and dropped back, but I managed to pull back up through to twelfth. In the last race of the day I had a really bad jump off the gate, someone crashed in the first corner, and I came back through to tenth, not bad, with a tenth overall.

It was a good weekend! Starting off from Saturday’s qualifying, I got the fastest lap time from both groups, so I got a really good gate pick. I’m not really happy with the starts but the third one was alright. I got fourth in the first race, fifth in the second one and third in the last race and finished second overall, so I can’t ask for much more right now. The track was really nice for me, I like sand, it got really rough and because we’ve been training really hard in Belgium on sand tracks, that suited us. I want to thank the whole Oakleaf Kawasaki team, they’ve done a really good job with the bike and I’m really happy right now.

The first day, I thought, was very good for me, I had a better qualification than last weekend, which is a step in the right direction. The first race I was mid-pack of the start, and finished seventeenth passing four bikes in the process, this was my highest position in the GT Cup so far. The second race a was a bit back on the start got into twenty-eighth and was battling for twenty-fifth when the front end washed out and I finished thirtieth, which was quite disappointing. On Sunday I felt good but my starts still weren’t there; I had good races but finished twenty-eighth. The next race I had a mid-pack start was passing a few riders and finished twenty-first, which was a bit more successful. Last race just wasn’t there for me, the race led to a few mistakes, a bad start and I wasn’t flowing on the bike as nicely as I wanted to finish thirtieth again. I finished the weekend in twenty-fifth overall, but I would like to aim for a higher position at the next round.

I’ve had a good day with an eleventh and twelfth which I was happy with, but I was in ninth but had a little stumble. All in all it was a good weekend other than the twenty-ninth due to bike issues, and a fourteenth overall is not too bad considering the bad race.

I’m really happy with my riding today and the end result for myself and the team. Despite winning today thats the easier part of this year out the way and to move forward from here, I have to work on my starts being stronger. The AMCA races are shorter than say the Maxxis races that I have done in the past and therefore the first part of the race is so intense and important to be at the front. I’m confident that I can turn this round and have the support of my new team, mechanic and sponsors. Hopefully see you at Round 1 held by the Dursley Club at Nympsfield. Thanks guys!

This has been one of the better weekends so far this year, starting with Priit who was the fastest rider in qualifying, which gave him the best gate pick and which helped a lot this weekend with the rough track. He was fourth in the first race, which is good but could’ve been a bit better, but he kept it consistent which is good. In the first race on Sunday he was fifth, he crashed at the end which denied him fourth place, but he rode really smooth and consistent. In the last race he was third, trying to catch second, but the track was slippery and rough, so he didn’t push as hard as he would’ve liked and he didn’t want to make a mistake being in second overall. Shane made some improvements this weekend, he had a twelfth in the first race and a tenth in the last race, and I think a twelfth in the second race, but he struggled a little bit with a lack of time on the bike for a few niggly injuries that he’s had this year. He’s coming back a bit stronger now and getting some pace together, so overall it’s a good weekend.

Really good progress for Luke this weekend, new team and surroundings are hopefully going to give Luke the best opportunity to succeed in the AMCA this year, it’s a new series for the Oakleaf team to be part of and we look forward to seeing Luke give 100% in achieving his goals, it’s the start of a new chapter for Luke and Dave Rossilo, his mechanic, hopefully we will see Luke in action next week at Foxhill at the British championship