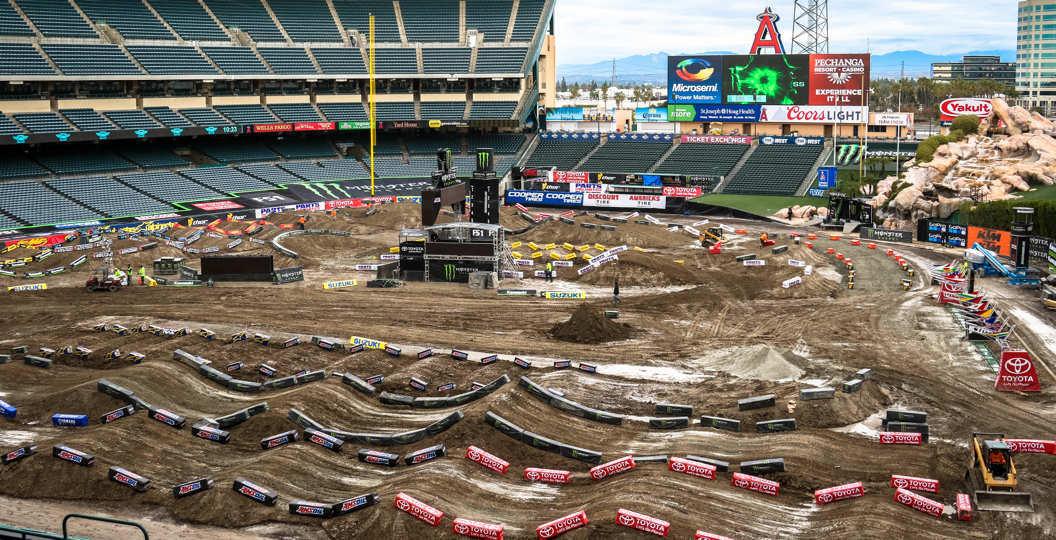 All of the pre-season predictions and analysis will soon be rendered useless, as we are about to find out who is really best equipped to achieve success in the 2017 Monster Energy Supercross series. Anaheim 1 is upon us and, although conditions are a little wetter than what some would hope for, the stage is set for a great night of racing.

A significant amount of rainfall has kept the Feld track crew on their toes, as they are currently racing around in an attempt to salvage the circuit. Some additional soil has been incorporated in spots, in an attempt to aid the drying process, and it seems that it has worked as intended. Practice may be a little damp in places, but everything should be fairly normal by the time that the night show rolls around. No more rain is forecast at all for the Anaheim area.

The wet-weather schedule is already in place, so that Feld have time on their side. The untimed sessions have basically been scrapped; there will just be the two timed sessions. A lot of the riders often comment that the first session is ineffective anyway. Track walk has also been pushed to midday, but apart from that everything is as you would expect.

The track design really has not changed too much, so studying the animated map is still a useful exercise. There isn’t a wall jump entering the sand section though, it seems that turn eight has been raised and it looks like the dragon’s back that was following the sand has been replaced. It actually looks like this could be one of the longer circuits, so we may not see the twenty-minute main events make too much of a difference tonight. It is worth considering that, as it is every year, this circuit is a little mellower than normal.

What else has gone on? The biggest news that has emerged this week is that Justin Barcia is out for the whole of January at least, but you surely know that by now? His JGR Suzuki has been equipped with the number twelve, so everything is in place for Jake Weimer to act as a fill-in rider. Apart from that, one of the  things that you should take note of is the link to watch Feld’s popular ‘Race Day Live’ programme. The show will begin at 12:50 local time and 20:50 in the UK.