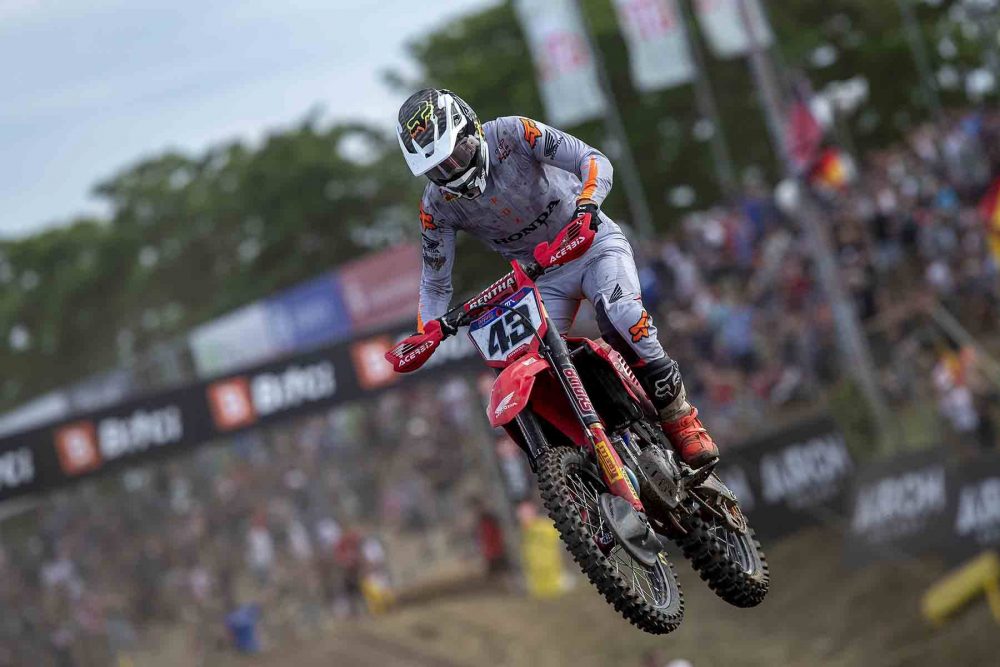 Having been forced to miss the entire 2021 MXGP season due to complications with his troublesome wrist injury, it was great to see Mitch Evans back on the grid in 2022 and completing the entire campaign.

While he returned refreshed, ready for action and with a positive outlook, he was adamant it would take him roughly 10 rounds before he got back to a level where he could battle inside the top 10. Inherently needing time to not only feel confident on the bike again and get his fitness up to speed in grueling race conditions but also to feel comfortable riding as his arm regained strength, his assessment proved spot on.

“It’s been a really tough 15 months for me, not being able to race and not being able to ride for such a long time. It’s been hard, both physically and mentally to try and stay positive and to keep the motivation high to come back to what is an extremely high level of motocross in the MXGP class now,” he recalled on his enforced layoff.

“However, I am feeling better and better every day now and my fitness and strength is ahead of the schedule I’d set out for myself. I know that it won’t be easy to race these guys right away because they are going so fast, but I’m not putting pressure on myself and I truly believe I can get back to that level. You never lose your ability to ride, so it’s just a case of getting my left-side strong enough and that is happening day by day. I’m really thankful to have had the support of Team HRC throughout this period and I’m really looking forward to paying that back by putting in the results on the track.”

After getting off to a slow start at the season opener at Matterley Basin, where he went 17-22 for 20th overall and importantly got through unscathed, this was an encouraging entrance back into the elite level.

The next four rounds saw him continue to find his rhythm, as he went 13-15 at Mantova, 10-8 in Argentina, 15-12 in Portugal and 10-9 at Trentino. Mixing some highs with some lows, but crucially taking promising steps with every passing weekend of action, the signs were ominous that he wasn’t far away, with his third in the qualifying race at Trentino offering tangible evidence of his uptick in fortunes.

Despite him facing many challenges in the next handful of rounds due to a combination of the sweltering conditions across Europe, unfortunate mistakes, issues getting out of the gate cleanly and the deep field in MXGP, much upside could be extracted from his sixth in a moto at Maggiora, eighth in race two in Spain and how he held his own near the front in the brutal sand in Sardegna before succumbing to the heat.

Getting faster all the time and subsequently having to constantly adjust the bike accordingly, there was still much to admire about his first half of the campaign, where his results didn’t always match his pace.

Heading into the eleventh stop of the series at Teutschenthal in Germany and having reached his deadline of finding his feet, Evans’ early prediction proved accurate. Turning in an exceptional effort in the rutted, rough conditions, the Australian produced his best day yet by going 8-6 for seventh overall. Stamping his mark and instilling himself with the belief that he has what it takes to battle with the frontrunners for the remaining rounds, this served as the catalyst for him to keep progressing.

The next two rounds in Indonesia and the Czech Republic saw him vitally carry his momentum, for he registered four consecutive top seven moto finishes to claim sixth and seventh overall respectively.

Notching his first top five finish in the process at Indonesia and further underlining his skills in a range of terrain, the 23-year-old could have done even better had he not suffered from blisters at Loket that caused him to relinquish his top five place.

Next up was the renowned sandy confines of Lommel, where Evans’ weekend started wonderfully, as he was charging hard in third during the qualifying race before a sickening crash on the face of the triple ejected him. Even though he suffered no major injuries, a battered and bruised Evans valiantly attempted to race on Sunday, but only lasted half of the opening moto, wisely opting to retire in order to focus on Sweden.

This decision paid dividends, for the #43 produced a fantastic ride to claim victory in the qualifying race to kick off the meeting in style. Recording the fastest lap time and one of only three men to drop a 1:51, the smooth, effortless Evans was imperious.

He then backed up this statement effort with a top display on Sunday. Fighting through the pack after an early misstep to come all the way back to 10th in the trying conditions, Evans then showcased his speed in the final race of the day by putting in his best moto of the crusade to secure fourth.

Following his memorable exploits in Sweden that gave him the boost he needed that a podium was in reach, he sadly just fell short in the final three rounds of achieving this goal. But he still deserves credit for giving it his all in Finland, France and Turkiye, where he demonstrated his speed but frustratingly couldn’t put all the piecestogether on race day.

Marcus Pereira de Freitas, HRC MXGP General Manager, summed up his year aptly, insisting: “For Mitch, we really thought he could achieve his goal of a podium, and for the first part of race one it looked really likely.

“However, we are still proud of his efforts because he never gave up and put in all the work necessary to get back to the front of the field. The results might not always show it, but he is one of the best motocross riders on the planet and we really hope he can put it all together at the Motocross of Nations.”

When speaking to Lewis Phillips in his Fly Racing post race podcast from Turkiye, Evans offered some fascinating insight on his season as well. “I feel like we’ve been building and especially since Loket when we made some changes to the bike. We kept going in that direction and getting better and better,” he explained.

“I’ve been enjoying going riding, because I’m really happy with the bike now and I want to ride it. I’m happy when I go and do motos during the week. It’s not not just from the bike, it’s also having my brother here and being in a good space off the bike in my personal life.

“I got 10th in the championship, which is not too bad, as I didn’t know what to expect coming back from my wrist injury. I was barely doing 30 minute motos before the season started. Really once I got the injection in my wrist after round one that’s when my wrist really started to improve and I feel like that’s when my proper training started. So all the training that I did during the winter was nothing. I felt like I was playing catch up all year.

“From then on it was just about building throughout the year. It was good, although I feel like I didn’t quite reach my goal of battling for wins and podiums. But at least we got a qualifying race win. I’d grade my season as a B+.”

Turning his attention to the MXoN, where he’ll join forces with the gifted Lawrence brothers to form a formidable all Honda HRC Team Australia, it’ll be fascinating to see how he fares. Seeing as the Aussies are one of the favourites and have never previously won the prestigious event, history beckons for the men from down under.

Still just 23 and with the world at his feet, Evans, who should be fully rested and ready to shine, will be looking to end his largely positive 2022 on a high at RedBud, where anything’s possible for him if he can ride to his immense potential.