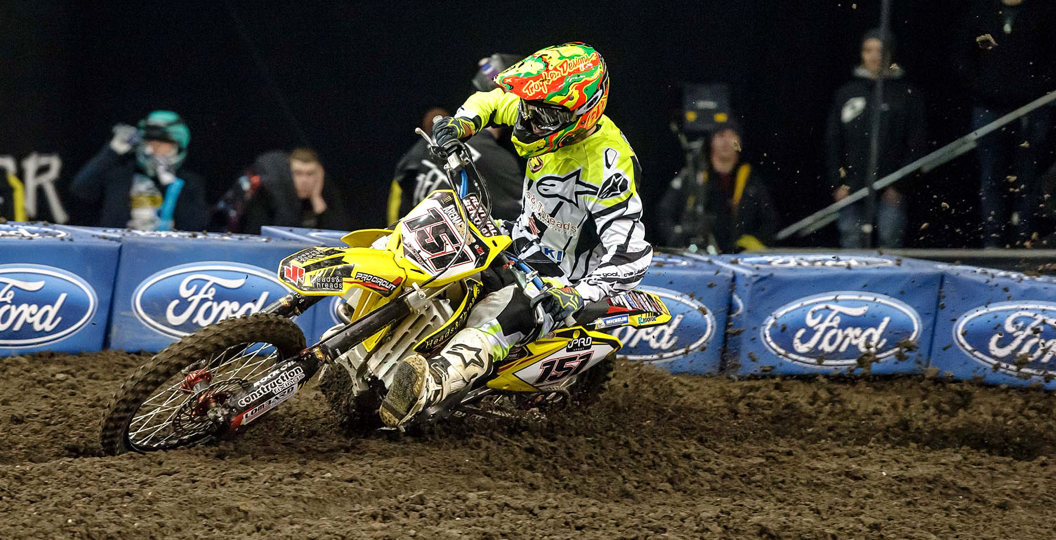 Friday the 16th and Saturday the 17th of January saw the Heads & All Threads Suzuki team head to Belfast and the Odyssey Arena for rounds two and three of the Arenacross series.

Harri Kullas maintained his form from round one and took the win in his first heat race on Friday. He continued to dominate and won the second heat by a clear eight seconds, and qualified himself straight into the main event, where he was forced to come through the field after a bad start, but managed to secure fourth.

Gary Gibson’s début with the Heads & All Threads Suzuki team went well, taking sixth and eighth in his heat races. Although he didn’t automatically qualify for the main event, and despite being landed on, in what was to be a red flagged LCQ, he recomposed for the restart, took the holeshot, and romped away to a win and a position in the final, where he finished the night in eleventh.

Saturday, and round three proved a little more hard work for both Kullas, and Gibson. They both struggled to make good starts through the night, which is a key factor on the short indoor tracks.

Kullas rode well to gain a fifth and second in his heats and qualified for the head-to-heads and main event. He managed to pick up an extra three championship points in the head-to-head, and took another fourth in the main, but more importantly took third spot in the championship standings.

Gibson’s first heat left him in eleventh,but he fought hard in the second to take fourth, narrowly missing out on qualification for the main. Unfortunately, he couldn’t replicate Fridays LCQ effort and missed out on placing into the final.

“It’s good to get two fourths, and pick up some extra points in the head-to-head on Saturday. I’m a little disappointed not to make the podium, but it’s good to be consistent. I’ve moved into third in the championship which is the main thing, and there are still five rounds to go, so there’s a long way yet.” – Harri Kullas, Heads & All Threads Suzuki #151

“I was going into Belfast with no expectations whatsoever, just see how it goes and see what my times were like. It was only my fourth time back on a bike since I broke my collarbone at the end of last year, so I’ve just been building up my strength and getting my fitness back.
I’d say I had a bit of luck in the LCQ and got a good holeshot in the restart, made a bit of a gap, and just controlled the race from there.
It’s good to get the race buzz back, and hopefully I’ll get a result and make the final in Birmingham.” – Gary Gibson, Heads & All Threads Suzuki #18

“It was a good weekend. Harri rode well and improved on his head-to-head results. Gary qualified for the main on the first night, and was close on the second, he out-shone himself really. Overall, I’m happy with how the team performed.” – Neil Prince, Heads & All Threads Suzuki Team Manager

Round four in the Arenacross series will be on Saturday, the 24th of January, at the LG Arena, Birmingham.