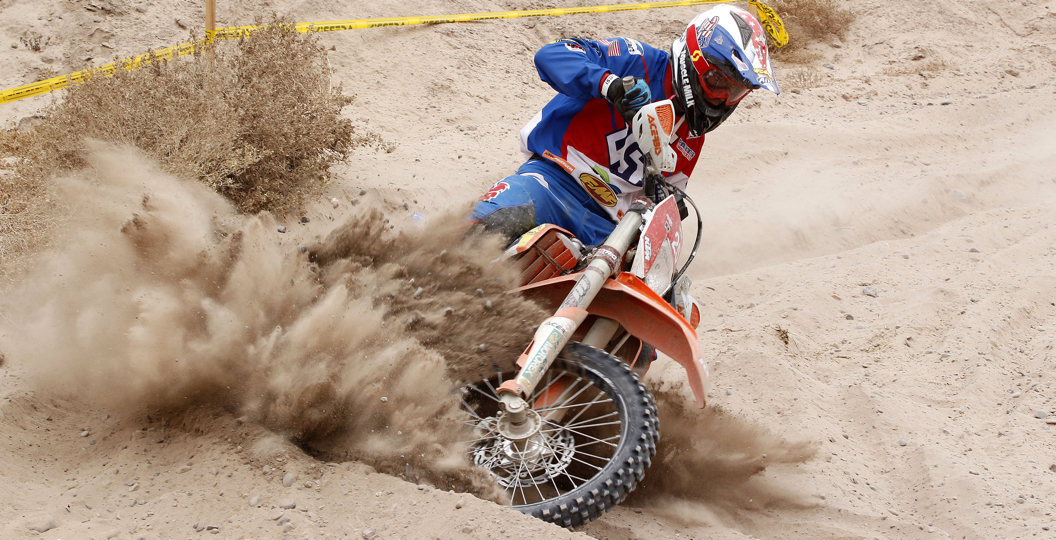 KTM factory riders wrapped up a good week at the ISDE Argentina 2014 with Christophe Nambotin taking a class victory in E1 and contributing to Team France’s medal winning victory in the coveted World Trophy.

Overall individual rider for this year’s competition was Pela Renet of France. He was followed in by three strong KTM riders – Price in second, American Kailub Russell in third and Phillips in fourth.

USA and Spain took 2-3 in the World Trophy while USA, France and Australia were the top finishers in the Junior Trophy. Australia secured victory in the Women’s Trophy followed by Canada and USA in 2-3.

The week was an eventful one for the riders with Days 3-4 being the toughest on them and the bikes and dust being a real issue. On a terrain and a competition and format the favored the bigger bikes, Nambotin decided to take the cautious approach to be sure to finish and help Team France take the trophy.

After many riders had difficulties on Day Three, organizers shortened Days Four and Five to five instead of six tests. The penultimate day was rather easy compared to the previous two days and the final day, according to tradition was the motocross test.

KTM Enduro Factory Team Boss Fabio Farioli said he was pleased with his riders. Nambotin was the dominant E1 rider and Price and Cervantes duked it out in the E3 class for the top two spots. Farioli said Price had impressed “Toby was very fast on the sand and the stones. He surprised me a lot,” he said, adding that Cervantes had done particularly well given the fact that he had still not completely recovered from an ankle injury in the world championship season.

It was also a good effort by Phillips, the 2014 E3 World Champion who was also not completely recovered from a foot injury during the season. Phillips exchanged his bigger KTM to the KTM 350 to contest the competitive E2 class and held up well until Day Five when he slipped from second the third in the E2 rankings.  “Phillips did a great job. He is new to the 350 and he didn’t have a lot of practice time on it before this event,” he said.

What the KTM riders said:

Christophe Nambotin: “When I came here my focus was to try and fight for the overall victory but with a lot of sand tests it was too much. But it’s good to have won the Enduro 1 class. I’m very happy about that and helping France to victory.”

Toby Price: “I’m more than pleased with how things have gone this week. To finish second overall and win the Enduro 3 category is really, really good. It’s been a long tough week. I can’t fault my bike at all. Aside from a couple of crashes everything went to plan. It’s been a great week.”

Matt Phillips: “It’s been a good week. Coming off my foot injury from the EWC I knew I was anything but prepared for this race but I was determined to give it my best shot. My plan was to take each day one at a time and see how it went. I surprised myself with my times and was competitive all week. To end the week third in E2 and fourth overall is fantastic.”

Ivan Cervantes: “The race was ok. The conditions felt more or less like home in Spain. Days three and four were hard on the bike so it was crucial to ride safe during those days. I focused on reaching the end of the week in the podium position and that’s what happened, which is perfect for me.”

Kailub Russell: “Overall it’s great to finish the race second as a team. Unfortunately we had a number of issues that cost us a chance of winning. On the first two days it took me a while to settle in, but as the week wore on I got better and better. Capping things off by winning day six is great. I’ve enjoyed it a lot.”

Taylor Robert: “It’s been very up and down for me. I’m happy with my performance – I was one of the fastest guys in the race and I feel winning day five helped prove that. It was just a case of bad luck to run into bike trouble on day three and lose nine minutes. But I never gave up hope and kept fighting to the end, which is what the ISDE is really all about. Finishing second with USA is brilliant.”