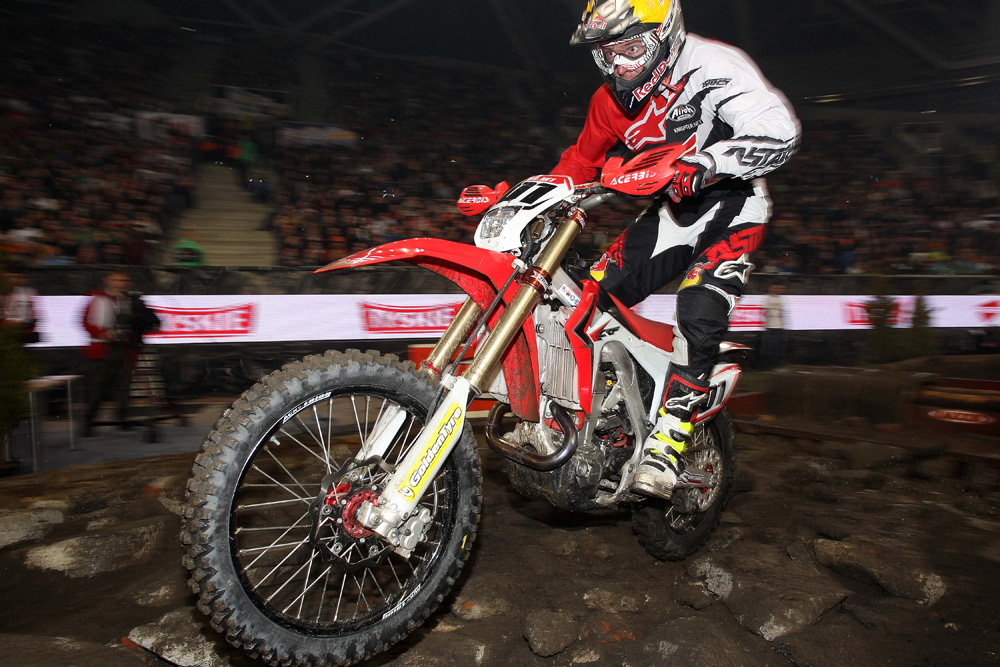 Knighter Honda rider David Knight signed off the 2013 Super Enduro World Championship with a win to secure runner up spot in the 9 race series.

Starting first in the qualifying heat after taking the holeshot, David had a race long battle with Taddy Blazusiak pressuring the Pole into a mistake and going on to win which put the Manxman on pole position for the three of the evenings finals.

Final One:
David rounded turn 1 in third behind Walker and Blazusiak, sitting comfortably behind for a few laps, Blazusiak passed Walker for the lead, David followed him into second and stayed close but unfortunately got a couple of back markers in his way in the rock section and lost contact. Charging hard the last couple of laps, David caught back to within 4 seconds at the chequered flag for a solid second.

Final Two:
The lottery of the reversed grid gave David last choice, initially getting a good start, he got pushed wide at the first turn. After chaos at the first rock section then a crash in the log pit trying to pass slower riders, David got settled and closed the gap getting back to fourth place at the finish which considering the mayhem was a good solid ride.

Final Three:
David rounded turn one second behind Blazusiak and in a copy off the qualifying race David stayed on the Pole’s rear wheel for the first half of the race forcing Blazusiak to make some small mistakes, before finally making a big mistake in the rocks. Knighter blasted the 450 Honda past and never looked back, signing off by taking his third win of the 2013 Super Enduro Championship and getting second overall in the final world championship standings.

David Knight:
“Today has been fantastic, and also my best indoor race for a long while. The whole day has gone very well, the track was built by the Endurocross guys from the USA. The dirt was incredibly grippy which made for great racing, and as always in France the passion for enduro was incredible!
Race 1 went well, I rode hard but just came up short on winning. The second race is a lottery with the reverse grid, it nearly worked out on the first turn but then when I arrived in the rocks it was chaos. I crashed after that just having to ride a bad line to try and pass people but finally got to 4th which I was satisfied with after all that went on.
Race 3 was a copy of the qualifying race, Taddy and me from turn 1 having a great battle. He was making mistakes in the rocks, I wasn’t, so I just waited and when he made a big mistake I was ready. It was really good for me as it was a good fair head to head race and I came out on top, but it was very enjoyable at the same time. Getting second after 5 years away from the indoor series and finishing behind Taddy is as good as winning for me, I’ve really enjoyed it. Taddy defiantly deserved to win the title, my team and myself are made up as I’ve won races against factory bikes and teams and the best indoor rider on the planet. This is all on a brand new Honda 450, with my own small team and with very few, but very important sponsors who have made this all happen. Thanks each and every one of you, and a massive thanks to Paul Eddy and Nick Ward, their hard work is incredible and now I can’t wait to get the EWC started next weekend in Chile.