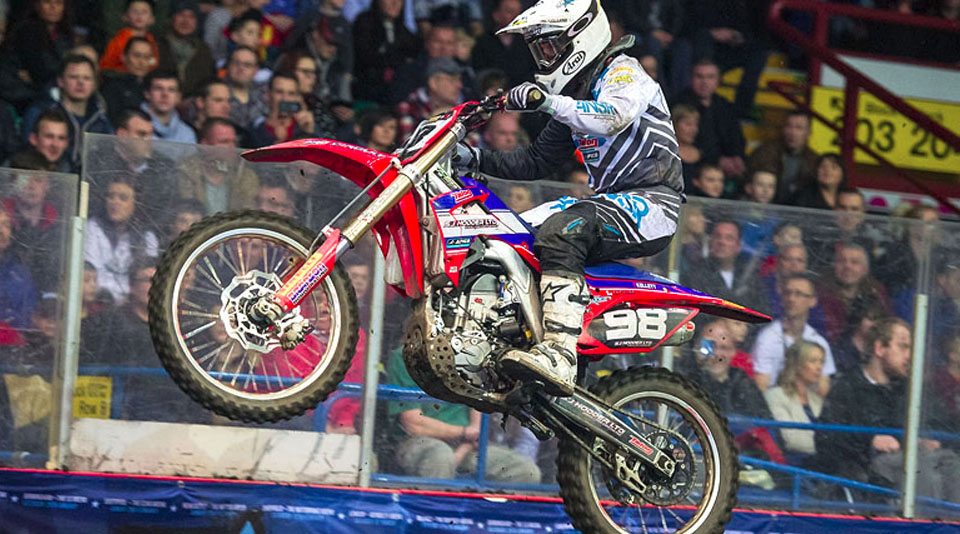 The first 2014 Garmin Arenacross Tour champion was crowned in Newcastle on Sunday afternoon when Todd Kellett (SJ Hodder Talon Apico Honda) raced to his fifth straight win in the Rookies.

Despite finding himself on the floor on the opening lap, the 16-year-old from Langport in Somerset was quickly back on his feet and back at the front to maintain his unbeaten record. With the Youth riders able to drop their two worst scores Todd now can’t be caught.

“I’m absolutely ecstatic to be the Rookie champion,” says Todd. “I had no expectations coming into this series as it was a new thing for me so it’s absolutely brilliant and now I can just enjoy the next two rounds. I’m definitely looking forward to next week – I’ll have the number one on!”

He’s won five from five so surely Todd must be thinking about a clean sweep? D’oh, of course he is…

“It’d be nice to sweep it and now I’ve won the championship I feel like the pressure’s off me. I don’t think anyone’s ever taken a clean sweep in the Arenacross series so I’d love to be the first one to do it.”

At the tender age of 16 Todd could stay in the Rookies for another two years and try to make it a hat-trick of titles but he’s already thinking of moving up and testing his talents against Europe’s best.

“Depending on how the outdoors goes I’d definitely like to go Pro for next year. My manager’s suggested I ride Pro for the final two rounds but I don’t think I’m ready for it – it’s a serious, serious championship in the Pros – so I’m staying in the Rookies.