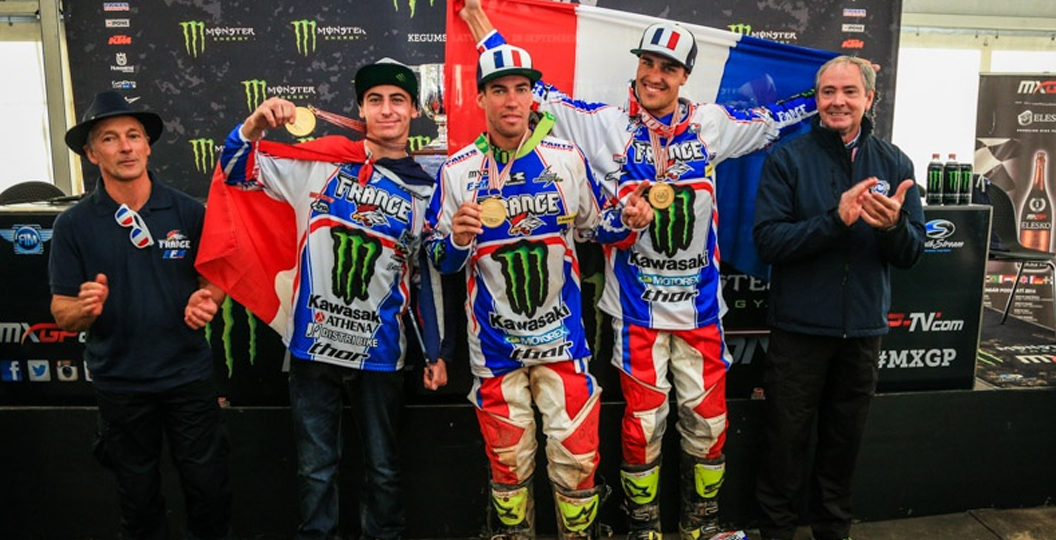 The Kawasaki trio of Gautier Paulin, Dylan Ferrandis and Steven Frossard scored an overwhelming victory for France in the annual Monster Energy FIM Motocross of Nations at Kegums in Latvia.

With an unrivalled display of team spirit the trio of French Kawasaki riders recorded their country’s second victory in the annual event for national teams with a score of just seventeen points to the twenty-seven of second-placed Belgium and thirty-three of USA and Great Britain. Both team leader Paulin, who was the commanding winner of both his MXGP class races, and Open class rider Frossard won their respective classes, while Ferrandis, despite starting each time from the disadvantageous outside gate, finished third in the MX2 class, which was won by fellow Kawasaki rider Tommy Searle.

Paulin took his Monster Energy Kawasaki Racing Team bike to victory in the opening moto for MXGP and MX2 riders and, with Ferrandis ninth aboard the CLS Kawasaki Monster Energy KX250F, France opened up an early lead in the team classification with ten points to the thirteen of second-placed USA.

In the second moto for Open class and MX2 machinery it was Frossard’s turn to do battle and he charged to second, while Ferrandis, unselfishly accepting the team’s outside gate, again finished ninth to further extend the French lead as they now led by seven points from Great Britain.

With Paulin victorious and Frossard fourth in the final moto, the French set the seal on a glorious day, the first time for nearly 30 years that the winning team in the annual event have all come from the same manufacturer.

The French successes were not the only significant results for Kawasaki as Britain’s Tommy Searle took MX2 honours for Team CLS, and teammate Dean Wilson was second overall in the Open class aboard his Monster Energy Pro Circuit Kawasaki as their team finished fourth in the Nations classification.

Arnaud Tonus led the Swiss trio to seventh place overall aboard his CLS Kawasaki and Gert Krestinov helped Estonia to ninth aboard his LPE Kawasaki, but Australia were limited to fourteenth place in the team classification despite the efforts of Chad Reed, their best man aboard his TwoTwo Motorsports Kawasaki. In total eleven of the forty-five riders in the top 15 teams entrusted Kawasaki to bring them success.

Gautier Paulin: “Winning both races and the overall at the Motocross of Nations with the French team is crazy ! I won the qualifying race and both motos today; it was a dream to have such a weekend in this race. It’s the sixth time that I’ve been a member of the French team and there was a great atmosphere between the three riders; we always gave each other information and advices to get the best result for the team. I’m proud that we achieved such a good result, and after my win in Mexico I end the season on a high note.”

Dylan Ferrandis: “In both races I told my teammates that they must get a great start so I gave them the best gate on the starting line. I was twentieth on the grid and came back twice into the top ten after the inevitable bad starts; I gave all what I had to get these results. I made a few mistakes but I’m proud of what we did today with Gautier and Steven. I knew that we could be on the podium after we spent all the week together training in Latvia and that was great. Before the last race I was convinced that we would win!”

Steven Frossard: “Today my teammates and I did a great job, and I was happy with my riding. In my first race I got the holeshot but then I had arm pump, however I still secured a second position, which was good for the team. Then in the last moto I pushed hard to come back in the top five; I knew that Gautier was leading and that we could win. It’s my best race of the season; it was a great experience to be there with the French team.”

Tommy Searle: “It’s nice to finish the season like this, I think that Kawasaki did a great job to develop the 250 over the last two years, and for me it’s the best 250 on the track. I’m happy to end the season on a high, and it’s nice to prove again that I can race in front. It was easy and fun to ride this bike; I haven’t had such a lot of fun for a long time. The track was rough; it’s also sandy here and I proved that I can get good results in the sand.”

Dean Wilson: “It’s a long time since I rode a track as rough as this, so third and fifth is not so bad, but I’m still frustrated because I know I can do even better. It was so disappointing for our team to lose the podium on the tie-break after one of my teammates had bad luck with his bike, but we’ll be back next year to put that right.”

Chad Reed: “It was a rough weekend. I felt good in the training session, but it seemed like I was in the wrong place at the wrong time every time I went out to race. But I’ll put it behind me and now the focus will be on another successful supercross season.”