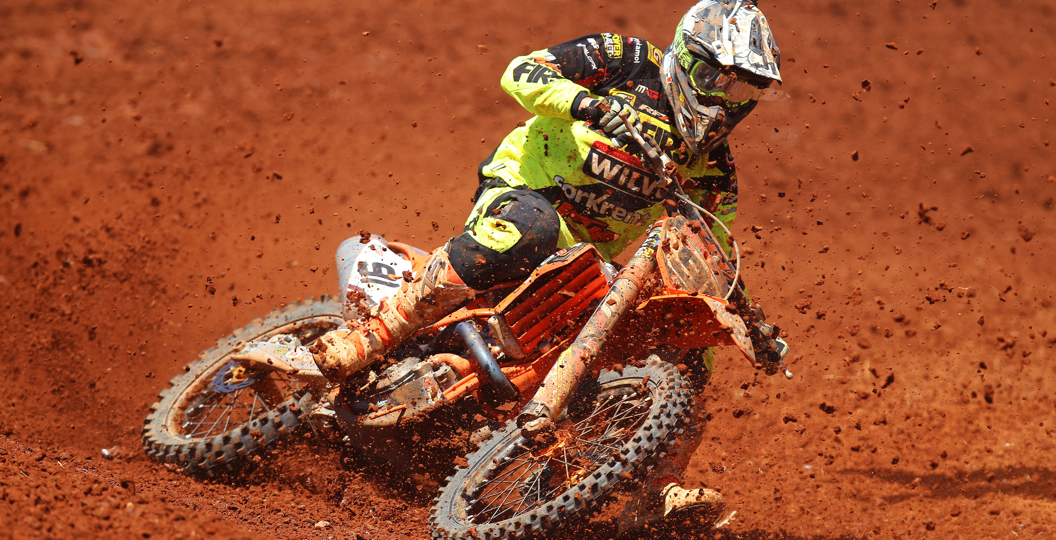 Trindade, Brazil – 8 September 2014. After a few weeks break the team headed to South America for the season ending double-header of Brazil and Mexico. After a marathon trip from Amsterdam, through Atlanta and Brasilia, Matiss Karro and the team finally arrived in Goias, Brazil for the penultimate round of the FIM  Motocross World Championship.

Greeted by a track not too dissimilar to Beto Carrera, the organisers once again had constructed temporary stands around a large section of the track to accommodate the many spectators descending on the venue. The fans as excited and passionate as ever, came in their droves to watch their heroes battle it out.

Qualifying:
Following on from practice, Karro made another fantastic start in 3rd in the qualifying heat. After losing a place to Paulin he looked fairly comfortable as he held 4th position from a chasing Guarneri and Strijbos. A mistake in a deep rut left him on the floor and he unfortunately had to settle for an eventual 16th place.

Race 1:
Making a poor start in race one, Karro found himself down in 14th at the end of the first lap. Passing opportunities were few and far between which was demonstrated by his race long battle with Potisek. Faster than the Frenchman he just couldn’t make a pass stick. The two of them managed to gain a few places as Simpson crashed out and Van Horebeek faded in the dying laps. By the end of the race Karro crossed the line in 11th place.

Race 2:
Trying to make up for his poor start in race one by gunning it round the outside on the first turn, the Latvian gave it just a little too much and the back end of his bike stepped out and high-sided him over the bars.

After picking himself up in 17th he set off in pursuit of the pack and eventually managed to reel them in. Following a number of passes he found himself up in 11th place but was soon under pressure from Stijbos who had also crashed on the first lap. Strijbos managed to make a pass but Karro was handed the position back on the next lap as Goncalves’ bike expired. With the riders in front too far ahead to have any chance of catching them, he strolled home for his second 11th place of the day, giving him 10th overall.

Commenting afterwards, Matiss Karro said: “This weekend I wanted a good result. Today felt good in practice but in the first race I had a terrible start, it was difficult to pass, so I only got 11th place.

“Second race start was better but I crashed on the first corner and from last I managed to get 11th for 10th overall. It was OK this weekend but I want to do better and I have one more GP left to do that.”

Team Manager, Steve Turner added: “It didn’t really go to plan today, although we ended up with a top ten overall. The track was extremely hard to make passes on so the start was crucial.

“Matiss made a bad start in the first race, which made his job difficult so he went for it in the second race but crashed on the first turn. That made even more work for him but he managed a second 11th place finish. Looking forward, lets see what Mexico has in store for us.”