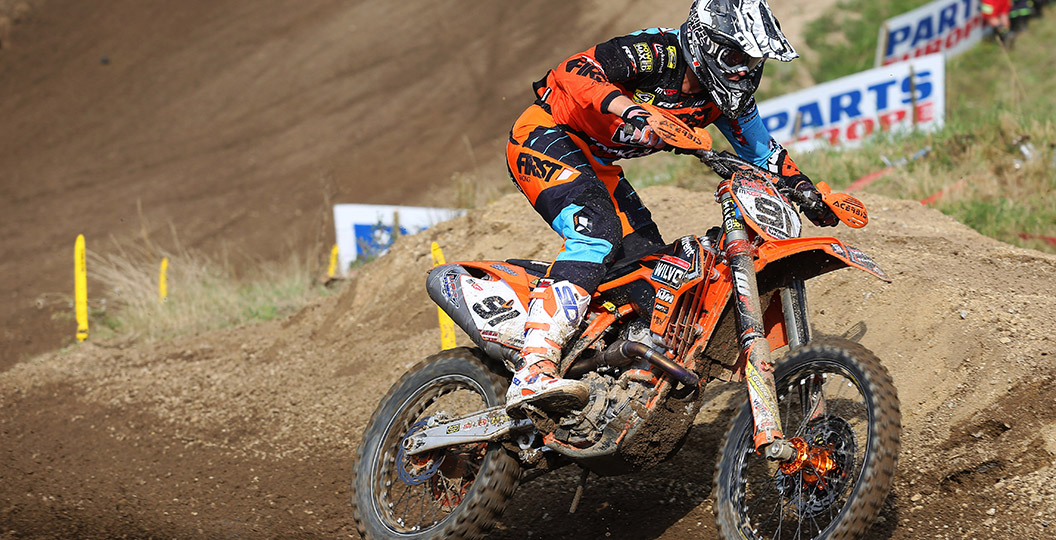 Loket, Czech Republic – 28 July 2014. With no EMX250 class at round 14 of the MXGP of the Czech Republic, Matiss Karro was the lone representative for the Wilvo Forkrent KTM team competing in the MX1 class at the weekend. With the 23 year-old Latvian facing a track that he has never enjoyed riding in the past and fresh from his success at the British round at FatCat, the team were hoping for a solid weekend of racing.

Qualifying:
After posting 5th fastest in timed practice, Karro went to the line with ambitions of taking another one of his great starts and he definitely didn’t disappoint as he flew out of the gate in 2nd. Just halfway around the first lap as he rounded a tight left-hander, Van Horebeek ran into his back wheel pushing him into Nagl and he subsequently went down. Rejoining the race in 17th position he quickly got into his stride and on a track difficult to make a pass on, managed to force his way through to 11th by the end of the race. Race 1:
Gating in 10th and after Guarneri went straight over the top of a berm Karro inherited 9th position. Pushing hard he tried to close in on Ferris but passing the tough Aussie proved to be too difficult. Karro hounded him lap after lap but in the end the amount of effort he needed just proved too much and instead of moving forward, he unfortunately ended up conceding places to Simpson, Leok and Frossard eventually finishing 12th.

Race 2:
Karro made a better start second time out in 7th and quickly passed Simpson for 6th but it was a case of deja vu as he was faced with having to pass Ferris again. He tailed the Husqvarna rider lap after lap trying to set up the pass but when he made a serious attempt he clipped Ferris’s back wheel and nearly went down. Although he managed to save it he lost momentum and allowed Paulin and Guarneri through. A missed rut then cost him another two places to Simpson and Searle. Sticking with it he later got a small reward as Ferris crashed. In 10th he held off a late charge from Leok to secure his position which was eventually enough to also give the Latvian 10th overall on the day.

Commenting on the weekend Matiss Karro said: “Race speed was good this weekend and I didn’t expect such great speed because it’s not one of my favourite tracks. My starts were OK and riding was good but by the end of the moto’s I lost the rhythm and lost some important positions. I’m still really happy to get 10th overall though.”

Team Owner, Steve Turner added: “Matiss looked good this weekend and rode well both days. He had his best timed qualifying of the season, and was even able to make a great start off the back of his gate pick in the qualifying race in second but unfortunately he was tagged by Van Horebeek and went down. He came back strong to get 11th which gave him an OK gate pick for Sunday’s races which he had two good starts in. Both races were very similar for him being a little bit faster than Ferris each time but unable to make the pass and losing places when making small mistakes as he tried to force the issue. All in all I’m pretty happy with the weekend – top ten overall at two GP’s in a row is good going.”