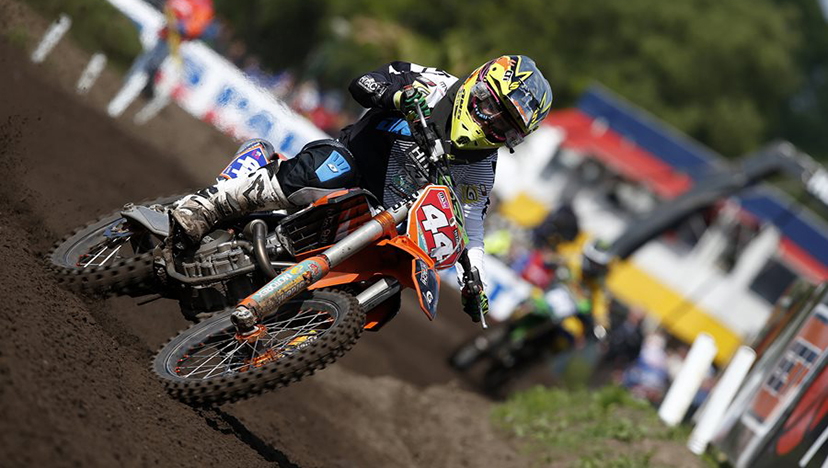 Hitachi Construction Machinery UK KTM travelled to the sixth round of the FIM Motocross World Championship at Valkenswaard for the Grand Prix of the Netherlands with a four rider line-up across three classes: the premier MXGP category (Shaun Simpson), MX2 (Mel Pocock, joined by Ben Watson on this occasion) and WMX (Natalie Kane in the third round of six in the FIM Women’s series).

27,000 spectators surrounded the dark sand that was carved into a plethora of bumps and holes through the sheer relentless timetable of sessions, chronos and races through the weekend. A number of riders and teams deliberated with the ideal set-up to combat the hard ground under the loose top sand and other areas of the circuit that was deep and treacherous.

Simpson, winner of the last premier class Grand Prix in the sand at Lierop last September, was exasperated throughout the weekend. Some promising speed on Sunday was nullified by a less-than-ideal set-up on his 450SX-F in the first moto and a first lap crash dumped the Scot to the rear of the pack from where he struggled into the points zone. An overhaul for moto two was a step in the right direction and Simpson was able to attack the sand in a more effective manner. His final scorecard read 16-8 for eleventh overall. ‘24’ was able to make progress in the championship standings and is one point behind Evgeny Bobryshev in 7th place and is also hunting the 53 point gap to Max Nagl in sixth spot with the German set to miss the next four Grands Prix due to injury.

Other results of note belonged to Natalie Kane who took her 250SX-F to two third positions for her second podium finish of 2014. The Irishwoman had to concede the red plate as WMX championship leader to Kiara Fontanesi by one point but the title tussle could not be closer at the halfway stage of the series and with three rounds left on the slate. Only a small second moto mistake prevented Kane from pushing her lap-times down and challenging for his first overall success this season.

MX2 was not a ripe hunting ground for the team. Mel Pocock was out of sorts after a big crash in the first moto ruined a good start and running position inside the top ten. The former European Champ did not pick up any points. Ben Watson made a wild-card appearance in the class and still buoyed by his EMX250 European Championship moto victory two weeks ago in Bulgaria. Ben didn’t enjoy the best of starts but took what he could from the experience to continue to build his form and speed for what promises to be an exciting Euro campaign.

Watson will stay with the crew this week as he moves from world to continental duty. The second outing for the EMX250 field will take place at the Grand Prix of Spain on May 11th. Talavera de la Reina last hosted a Grand Prix back in 2001 where the winner of the 250cc event was Irishman Gordon Crockard; perhaps a positive omen for Hitachi Construction Machinery UK KTM.

Shaun Simpson: “Frustrating is the word to use because if I had started the weekend with the set-up I used in the last race then we could have done something good here. I struggled out of the gate in the last one but overall it was night-and-day difference compared to the first moto. We changed the gearing, the rear tyre and the suspensions set-up; I felt like a different guy. I hooked a nice start in the first moto but went down three corners later. I don’t think I would have been able to stay where I was to tell you the truth. I did salvage something half reasonable out of the first race considering but I should have been near the top ten. I was searching for those extra five minutes in the second moto! I was hounding Tyla [Rattray]. Eighth in the championship, one point off seventh and Nagl is there for the taking as well. I’m looking onwards and upwards and it just shows that a bad weekend can turn into a half decent thing and to never give up.”

Roger Magee (Team Principal): “Coming into Valkenswaard, all our riders knew that it would be a difficult GP due to the ever-changing track conditions in the loamy sands of this traditional Dutch venue. It’s always satisfying to come away from a World Championship round with a podium result and again our WMX rider Natalie Kane came up with the goods. But for an unfortunate ‘moment’ when she cased one of the many jumps in the latter stages of moto 2 when closing on Lancelot, this arguably cost her the overall win as she lost her rhythm for the last few laps. The championship is now the closest fought in recent years with only 2 points covering the top 3. In MXGP, Shaun had an unfortunate ‘off’ on lap 1 of moto one and had to fight back to a very creditable 16th at the flag. A really sound moto 2 with 8th showed that he really relishes difficult sandy conditions and has now closed in on Bobby in the overall Championship. MX2 proved difficult all weekend for Mel and debutant Ben Watson. Unfortunately both came away without any points on the day, but gained a wealth of experience in trying track conditions. We now look forward to next weekend’s GP at Talavera – a new venue for our World and European riders.”

GP of the Netherlands: