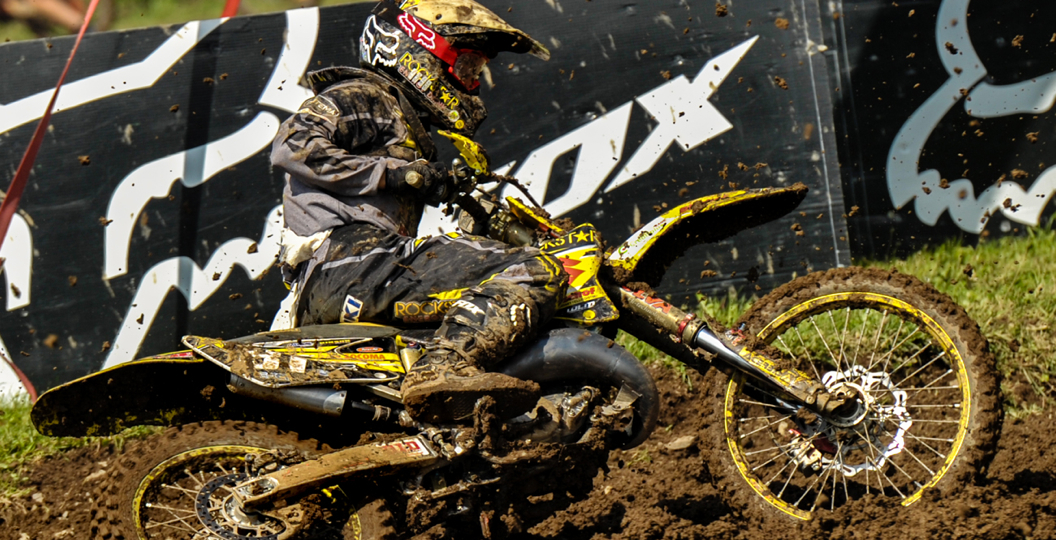 LIERNEUX (Belgium), 9 August 2014 – It has to be said, the out-come of today, day one of the 2014 FIM Junior Motocross World Championship, turned out way better than expected. After torrential rain absolutely hammered the circuit over night forcing a two-hour delay in the time schedule this morning, there was a massive sigh of relief when the dark skies subsided and were replaced with a pleasing shade of blue.

While the officials may have approached the track feeling a little nervous in all honesty, the condition of the track was literally astonishing as most of the water had managed to roll right off the top. After the two 125cc groups had finished, with France’s David Herbreteau topping group ‘A’ and Rockstar Energy Suzuki Europe’s young German Brian Hsu cleaning up in group ‘B’, the track was left looking nothing short of superb!

Proving to be fastest in the sludge of the morning, one of Europe’s hottest prospects David Herbreteaufrom France laid down a time 1.5 seconds faster than Holland’s Rene De Jong. Rounding out the top three was Denmark’s Glenn Meier who was followed by French Dan Houzet with last year’s Junior 85cc World Champion Red Bull KTM Factory Racing’s Conrad Mewse rounding out the top five.

As the track started chewing out and drying up rather nicely, it suited no one more than Rockstar Energy Suzuki Europe’s EMX125 champion Brian Hsu, who was in clearly in ‘grip it and rip it’ mode as he set a lap time almost three seconds clear of the next fastest rider in group ‘B’ and a whopping five seconds faster than Herbreteau in group ‘A’.

Coming away as the group ‘B’ runner up Holland’s Max Engelen edged out last weekend’s European EMX125 round winner Swedish Alvin Östlund while young Latvian Tomass Sileika and VenezuelanLorenzo Locurcio rounded out the top five.

All the kids on 85’s were wrapped with the condition of the track by time they were able to let rip. The 125’s had cleared off all the slop and formed some nice flowing lines making it super cool for the 85’s to carry a good amount of speed without feeling a little sketchy.

Topping the charts in qualifying group ‘A’, young American, who admittedly looks up to European phenomenon out of Germany Ken Roczen, Brock Papi was the fastest but only a split second faster than Rockstar Energy Suzuki Europe’s young Italian Gianluca Fachetti. Also running the same 2.08 lap time as Papi, Frenchman Brian Moreau Strubhart was third and Danish Bastian Bogh Damm was fourth with the youngster hailing from San Marino, Andrea Zanotti, rounding out the top five.

In group ‘B’, one of Holland’s next biggest talents who already has a motocross feature film on his resume, Roan Van De Moosdijk heads the leader board half a second clear of another AmericanConner Mullennix and Brit Taylor Hammal. Meanwhile, Swede Rasmus Hakansson wrapped up fourth with a lap time only fractionally faster than the recently crowned European EMX85cc Champion Sakahr KTM Racing rider Jago Geerts.

With the rain putting a giant damper on the dawning of the day, one of the biggest fears was that the 65cc might not be able to complete a lap, but after the 125’s and 85’s had been out the track was in near perfect condition, no dust, no mud, setting a wicked stage for those tiny wheel’s to let rip.

In group ‘A’ the kid who had found the utmost amount of traction with his little 12” wheel’s was AmericanJeremy Ryan who was closely followed by the future of Japanese motocross Jo Shimoda. A further one second back young Australian Jett Lawrence was third while the fastest Spaniard of the day was Gerard Congost in fourth with American Jett Reynolds rounding out the top five.

Meanwhile in group ‘B’, and wrapping up the qualifying sessions, Danish Rasmus Pederson wrapped up pole, half a second clear of American Carter Biese and fellow Dane Magnus Smith. Another fourth for team Spain with David Braceras, while the European EMX65 Champion Russian Nikita Kusherov was fifth.

With the qualifying sessions in the bag and Belgium being notorious for its unpredictable weather patterns, no one will be holding their breath for a scorcher tomorrow nor will they a mudder. Instead it will be played by ear and everyone can sleep easy knowing no matter what the weather brings, the racing will be intense and exhilarating and at the end of it three of the world’s best motocross riders will walk away crowned 2014 FIM Junior Motocross World Champion.