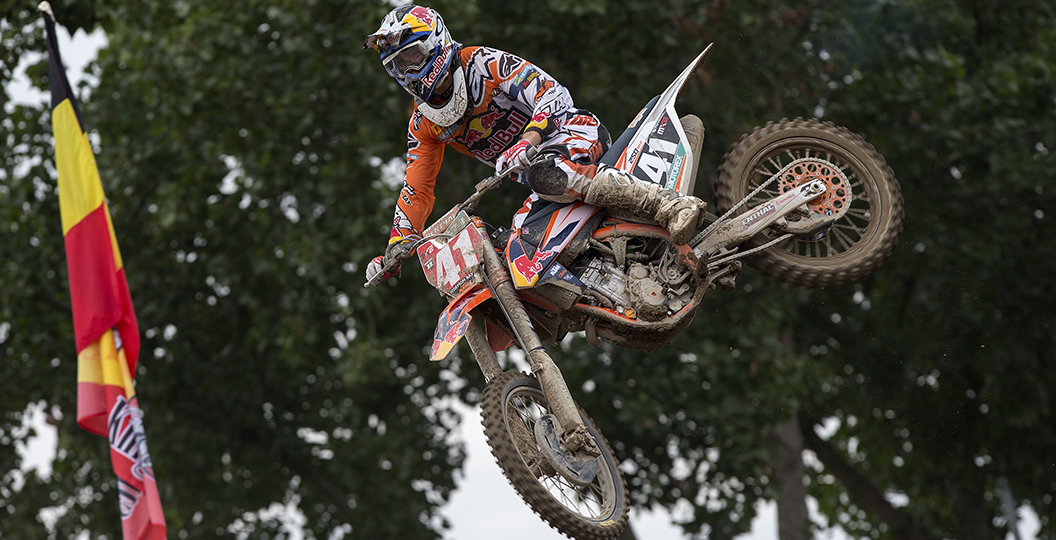 The young KTM rider also retained the red plate as championship leader, which he won the first time in his career at the last round in Lommel, Belgium.

Jonass, in the absence of his two teammates, Jeffrey Herlings and Davy Pootjes who are both recovering from injury, delivered a 2-3 race result on the sandy Italian circuit. He again showed he can be fast out of the gate and stay with the more experienced riders, but he said later he was not completely satisfied with his riding in the second moto.

Pauls Jonass: “The first race was pretty good but the second one not so good and I know I can do better. Now we go to the next race with the same points advantage. We didn’t gain anything but we didn’t lose anything. This week we will do some testing and for the next race at Assen, which is new for all of us, I’m hoping for some deep sand so it will be a real Motocross, like in Lommel.” Jonass rides the KTM 250 SX-F Factory bike.

Red Bull KTM MX2 Team Manager Dirk Groebel said it seemed Jonass was not really feeling the pressure of being the championship leader. “He rode a very good first race and was pretty strong and gained some points on Gajser, but then he gave them away in the second race. I hope he can keep riding just like this, without pressure and just being himself, and being on the podium every weekend. That would be good.”

Speaking of the Factory team’s two injured riders, he said Pootjes, who has some tendon problems in his arm would consult the doctor next Wednesday. “He should be back at the next race in Assen,” Gruebel reported, adding: “Jeffrey (Herlings) was at the doctors and the healing process is all going well. Hopefully he will be back on the bike sometime in November so he can start to prepare for next season.”

With the three Red Bull KTM Factory riders also on the injured list, it was Scottish rider Shaun Simpson who was given an opportunity to ride the new 2016 KTM 450 SX-F Factory bike, and he delivered a solid 5-4 moto result for overall fourth place. MXGP winner was Roman Febvre of France while Jeremy van Horebeek and Evgeny Bobryshev took second and third.

Simpson, who was just back from riding in the US MX National at Unadilla where he finished fourth in his debut ride, said the experience had been great. “I really had that ‘Factory feeling’. Yesterday I was disappointed because of the mistake and bad result (in qualifying), but today I showed that it’s not about Saturday, it’s about Sunday, and we had some good points. I’m really positive about the bike, the team setup and about my opportunity until the end of the season. So let’s work hard this week and maybe we can be one step better in Assen.”

Red Bull KTM MXGP Team Manager Claudio de Carli said the team was very happy to support Simpson with the 2016 Factory bike. “It is correct to do this. Shaun deserves it because he’s good and the new bike has a lot of potential. The more it is ridden the more we get out of it and the better it is for everyone. Shaun did pretty well for his first race on the Factory bike because he still doesn’t have the complete feeling for it and he was a bit nervous. I know next week it will already be much better.”

De Carli also took the opportunity to update about the team’s injured riders, reporting that Antonio Cairoli’s recent checkup with Dr. Claes in Belgium was good news as he was told the bone is healing and he does not need surgery. “He will be able to start training on the bike in 8-10 days and he is planning to do the last race in the USA, together with Tommy Searle.”

He added that it was important for the team to put this season’s problems behind them. “We have had very good seasons in past years and statistically once in a while a team can have a bad season. There have been a lot of accidents and we all need to understand why so many riders from so many teams have been injured. The teams and riders also need to understand what direction we need to go in the future,” he commented.