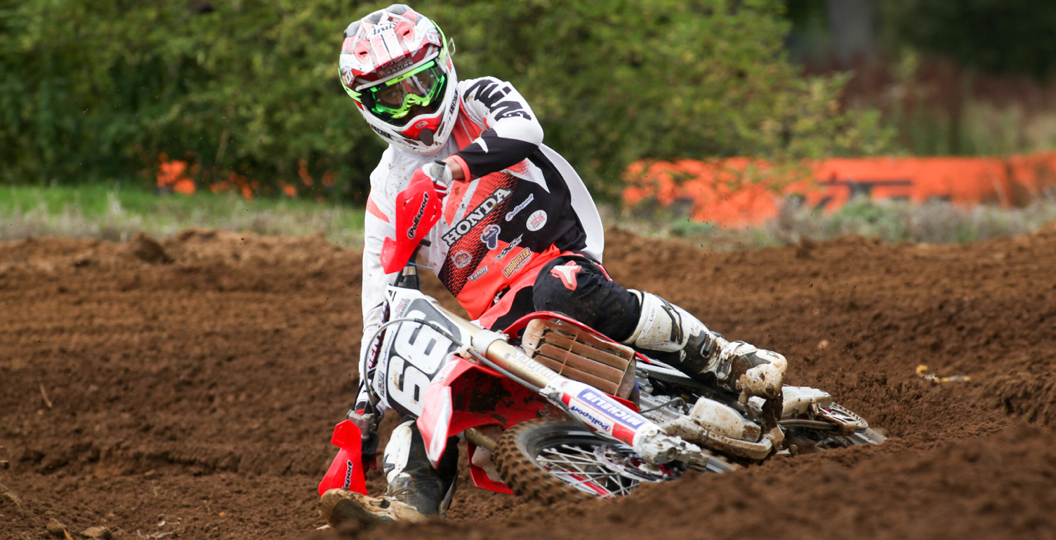 This bank holiday was a return to old stomping grounds for JAR Honda’s Lewis Tombs as he returned to Culham in Oxfordshire for round six of the MX Nationals. This time, the track’s start had been moved to the bottom of the track, along with the rest of the paddock, and several other changes made the track more challenging over the weekend.

After a practice session, Tombs got his qualifying session out of the way with an eighth place. The first race of the weekend later in the afternoon got underway with Tombs in the top five. After settling into a rhythm, he set his sights on his rivals ahead of him, only to lose touch for a while. A second wind allowed him to recover, ending the race fifth.

On Sunday morning, Tombs didn’t have quite the start he wanted, but he soon gathered himself up, attacked a few rivals and soon found himself in seventh. With single digits remaining on the clock, he moved into sixth, ending there at the end of his thirty-minute race. The final race proved to be tough. The rough track proved to be challenging for many, but for Tombs, this seemed to be ideal. Fifth in the first lap, Tombs quickly ascended to third before he was forced to relinquish it by a pair of world championship regulars. He quickly latched on to Mel Pocock, the one nearest to him, going across the finish line only yards behind him for another sixth place, scoring eighth overall on the weekend.

Qualifying was alright, I got eighth, I felt really good on the track so I was quite positive. First race I was quite clever on the start and managed to come out in the top four, settled in and rode alright, actually, rode strong and halfway just lost the rhythm and ended up fifth, which was ok. First race on Sunday I had a pretty bad start, had to work hard the first few laps and managed to get to seventh. I made a good pass on Lew Trickett with a few laps to go, that was good. In the last race I was running in third in the beginning and I didn’t ride great, the track was a bit sketchy, but I came home sixth in the end, which is ok, so it was a steady weekend, my riding was a lot better and I was closer to the front guys, so I’ll keep plugging away.