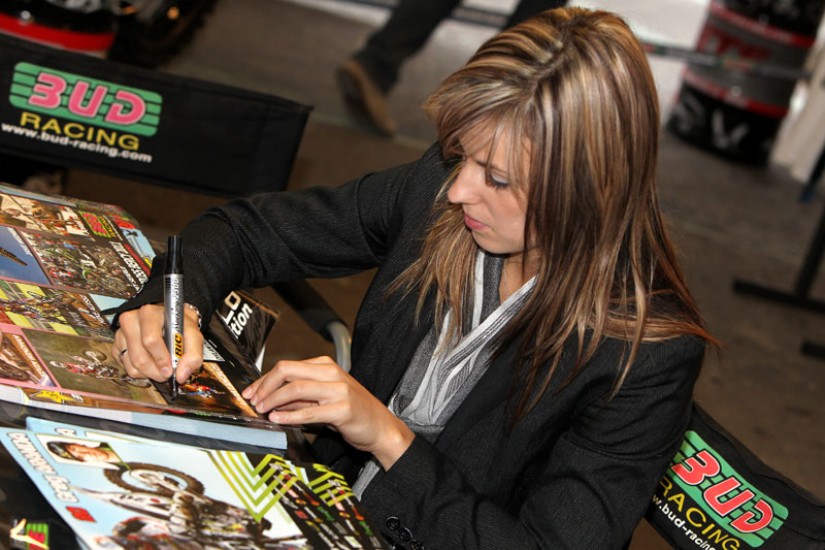 Livia has renewed her contract with Team Rockstar Bud Racing Kawasaki just before her final race of the season in Geneva. We sat down to talk about her current season and the future.

Another French title and a podium at the X Games, it was a good season for you Livia?
For sure the X Games was a good memory, as it’s a famous event and I was dreaming to go there. It was a new experience for me; I never practiced on a SX track before, and in May I started training Supercross with Pascal Leuret advices. I didn’t know what to expect when I arrived in the US, but everything went well and I claimed a podium result! My second goal was the French series, and once more I got the title; some of the other girls go faster and faster, it’s good to see new faces. For the first time I lost one heat due to a mistake; the level is higher, and I must stay focus 100% to keep the advantage.

Unfortunately you are no more involved in the World Championship?
I was unhappy to stop the World Championship, but the new schedule is not good for the girls. In the past the Women were racing with the MX1 and MX2 series, so for a team it was not too difficult to insert a woman to their program. This year most of the races are with the MX3 series; you travel in many countries, you need another van, you have not so much press covering the series and that’s an expensive program. With my partners we decided to go the X Games rather than the GP’s, and it will be similar next season. The 2012 calendar looks better with three races alongside the MX1-MX2 class, that’s a good step but we would like to have all the rounds with them!

This season you created your own team 114, how was it?
It’s never easy to manage a rider’s career, but taking care of your own team is even harder! I didn’t sleep well, as I had many questions in my mind, but finally everything went well even if I had some troubles with my team-mate. We didn’t have the same character and the same motivation. But we were with two riders from the team at each race, and we finished all the heats without any mechanical problem; for the last two rounds I invited American Tania Satchwell and that was great to see her twice on the podium! My partners are happy with our results, and they will be with us next season; a young French hopeful, Meganne Pernet who is just sixteen years old will be with me in the team one-one-four supported by Rockstar Bud Racing Kawasaki.

Let us talk about your American experience?
That was great, and for sure when you arrive there you’d like to stay! Everything is bigger, nicer, there’s a lot of sun, tracks, stadiums. But I’ve a program here in France, and I’m happy to race in Europe where most of my partners are. But for sure I will be back at the X Games in 2012, I want to get a gold medal before I retire!

You were back on a Kawasaki, and you seem more comfortable than in 2010?
For sure I had a great feeling with the Kawasaki, as soon as I was back on it! In 2010 I had an experience on another bike, but I must say that I feel more comfortable on the Kawasaki. It feels like home in the Kawasaki family, as I know many people there; it’s nice to be part of the Rockstar Bud Racing team. People there are very professional, but the atmosphere is always cool and I’m pleased to continue with them next season.

Rui Goncalves is your boyfriend; he is supporting your career?
Yes, he is really behind me even if it’s sometimes difficult for him. He’s happy when I get good results, but he doesn’t want me to be injured. So when he tells me “you must go full gas in the whoops if you want to win the X Games” he immediately adds “but don’t get injured”. That’s not easy for him, but he is a great support!

Which goal would you like to achieve now?
For sure to get a gold medal at the X Games! This year I had no Supercross experience compared to girls like Vicki Golden who are focused on SX. I’m sure that if I continue to practice and work on Supercross tracks I will go faster, and I’m convinced that a strong Motocross girl can win the X Games. A win there will be perfect for my career, but I must say that I’m already very pleased with what I’ve achieved so far!