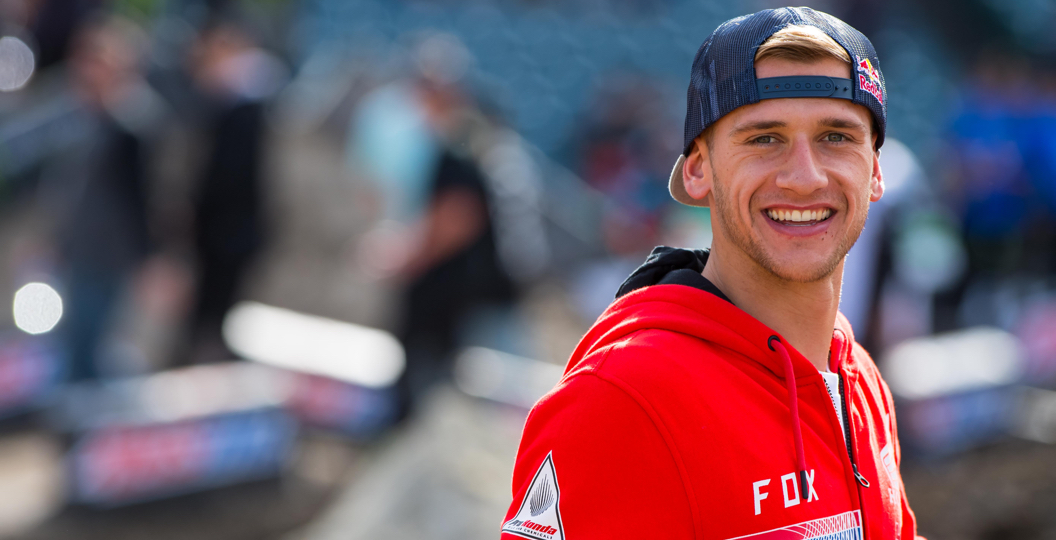 Yet another positive post has been released by Ken Roczen. Although the Honda HRC rider has not been pounding out countless laps on a test track just yet, he has been riding regularly and making leaps forward. The latest post shows just how far he has come in a short space of time and confirms how great he feels on a bike. “I am so happy and incredibly proud with the way I have improved in the last few weeks,” he wrote in a caption.

The final piece of the puzzle has finally been put into place for Ken Roczen. ’94’ had his final surgery at the beginning of August, as mentioned below, but that is firmly in the past now, as he started riding again (for a second time) earlier this week. This positive video shows the way that he is able to push in a little more detail.

Hard to describe how great my day was today. The last moto I did was my best one. Had so much fun and I am getting more comfortable. @honda_powersports_us @redbull @foxracing @shiftmx @motoxlab @breitling @stancesocks #Team94 | ?: @emeryphoto stitches come out on Wednesday ?

The last month has been extremely positive for Ken Roczen. Not only did he start riding again, he has now had a final operation to “tune up” his wrist. ’94’ took to social media yesterday to reveal the news, then later wrote that his “arm feels like brand new. Let’s get this party started. 17 screws and a plate lighter,” he concluded.

Ken Roczen is not expected to return to racing until the first round of the 2018 Monster Energy Supercross series. There are one hundred and fifty days left until that event.

I am so ready for the biggest challenge I have ever had to face in my life. You can call me cocky all you want; you can be with me or against me. Believing that I am the best and working to be the best has nothing to do with being cocky. It’s easy to point fingers from the outside once somebody has had a crash and say waahhh he rides over his head and all that bs! I have never, ever underestimated another rider. I am always staying sharp and I always prepare myself for anything. No matter if I win by 16 seconds in Anaheim, I have never gone to the next race thinking it was going to be easy. Because it never is and it never will be. I will always go for the W when I know I can. I will also settle if I know it isn’t going to happen that night but, you can’t blame me for trying. I can tell you one thing. I WILL win again and I WILL be back to my old form and I am not going to be surprised. I have the same mentality now as I had before my crash. My personality is strong and I am putting my heart, my head, and everything I have into it. @honda_powersports_us @redbull @motoxlab @foxracing @stancesocks @breitling Rock N Roll my friends ???

Ken Roczen has sparked intrigue across the world, as photos have emerged of him riding for the first time since his horrific injury in January. Roczen, the winner of the first two Monster Energy Supercross rounds, sustained injuries to his elbow, wrist and forearm.

Steve Matthes, our correspondent in the United States, reported a couple of weeks ago that there many theories surrounding Roczen. Some stated that he would return at Anaheim 1, whilst others argued that he would not be ready until the 2018 Lucas Oil Pro Motocross series. Based on the stories that Adam Cianciarulo and Christian Craig have posted on social media, it seems that he is well on track to achieve the former.

Blake Savage, Ken Roczen’s trainer, took to Instagram and wrote the following: “Never say never! You should have seen the smile on this guy’s face today. Proud you of you and all the hard work you put in!” Roczen himself also posted a message to fans that including the caption, “Don’t call it a come back. I never left!”

Over the last few weeks/months, I/we have been putting in A LOT of work and effort. For a long time, I was really limited to what I was able to do. Being the busy body that I am, the feeling of being useless made it hard for me to sit around. We got a call from Dr. Viola a couple nights ago with the green light to be able to ride on the turn track. Those unexpected words gave such a smile and the pure feeling of happiness. We immediately made about 10 calls in 10 min to tell some of my people that I needed a bike and gear TOMORROW!!!!!!! ? No one expected us to be back to riding already! Sometimes we take feeling healthy for granted. All of a sudden being at the bottom of your health, and not knowing if things are going to be ok is a feeling that is hard to describe. After all of the ups and downs, having the best doctor, a great support team with the companies and people that are behind me and who believe in me, and the positive vibes from all of my fans, here I am back doing what I love. What a great feeling to be healthy and being able to represent my sponsors, family, friends, and fans! So, for all of you guys that have had a down moment in your life, no matter if it’s an Injury or for personal reasons…you either fold up (not recommended) or you simply put your mind to something great and go and work for it. Don’t EEEEVVVEER doubt your self. Bad times!?? Do something about it! We did. @honda_powersports_us @redbull @foxracing @shiftmx @stancesocks ?