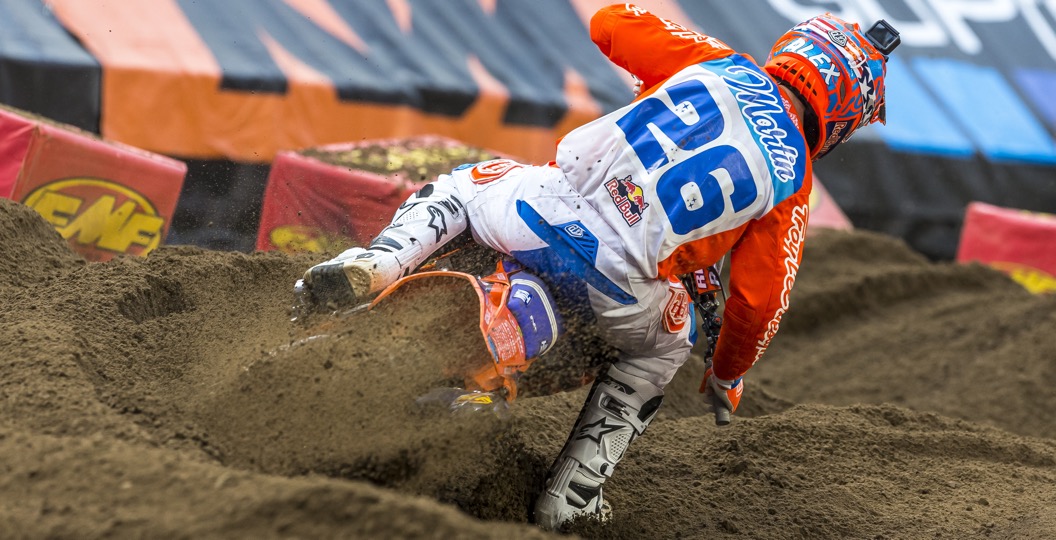 Monster Energy Supercross is gruelling, hence why we see so many injuries each year. We are now nearing the end of the current series and, following thirteen long weeks, seventeen riders are currently on the sidelines with some kind of health issue.

Out of St. Louis.

Alex Martin: The injuries that Alex Martin sustained in that collision with Christian Craig have not been confirmed, but they are serious enough to keep him on the sidelines this weekend. “Really disappointed for it to happen this way, but I can’t thank the team and sponsors enough for the support this season,” he wrote on social media.

Trey Canard: Trey Canard has struggled with various problems this season, but the latest hurdle has forced him to withdraw from Monster Energy Supercross. Canard has been dealing with a virus recently, so will take the next two months off in an effort to be at one hundred percent for the Lucas Oil Pro Motocross series.

Cameron McAdoo: The past couple of weeks have been quite busy for Cameron McAdoo, despite the fact that he has not been on track. McAdoo cut his hand prior to Daytona, then switched from MotoConcepts to Geico Honda, but was then expected to return in Detroit. “However, his hand is not yet ready to race and will be sitting out the next two weekends,” a statement from his team revealed before the previous round.

Chase Sexton: Chase Sexton crashed at the first professional race of his career, Atlanta, and broke his femur. “Been a rough past six months or so, but all the hard times make the comeback that much sweeter,” Sexton wrote on social media last week. There is no timeline on his return.

Benny Bloss: Benny Bloss crashed at the first 250SX East round and sustained a dislocated shoulder, as well as a fractured humerus, so will miss the rest of Monster Energy Supercross. Rocky Mountain ATV/MC KTM drafted in Dakota Alix as his replacement, but he is questionable for St. Louis after sustaining a high ankle sprain in Detroit.

Nick Gaines: Nick Gaines, of the Traders Racing Yamaha team, sustained a broken clavicle at Minneapolis and underwent surgery shortly after the event. “Look for Nick to be lining up for the last two rounds of supercross and then head straight into outdoors,” his squad have revealed.

Colt Nichols: Nichols is out for the rest of Monster Energy Supercross, after sustaining another knee injury prior to Daytona. “You don’t know how strong you are until you fall,” he wrote shortly after the incident.

Ken Roczen: The various struggles that Ken Roczen has encountered since his horrific crash at Anaheim 2 have been well-documented on this link. However, to summarise, injuries to his wrist, arm and elbow will keep him on the sidelines for an undetermined amount of time. The German has just started working out again.

Weston Peick: “So happy to finally get these damn pins out. It’s all up from here; a lot of therapy and I’ll be back stronger,” Weston Peick wrote on Instagram last week. Peick is not expecting to make it back for any of the Monster Energy Supercross rounds, but has his sights set on Hangtown.

Phil Nicoletti: A crash on press day in Arlington forced Phil Nicoletti to join his teammates on the sidelines. An injured left ankle and heel will keep him off of the bike for the foreseeable. An unknown quantity, Cade Autenrieth, has been signed as his replacement for the final three 250SX West rounds.