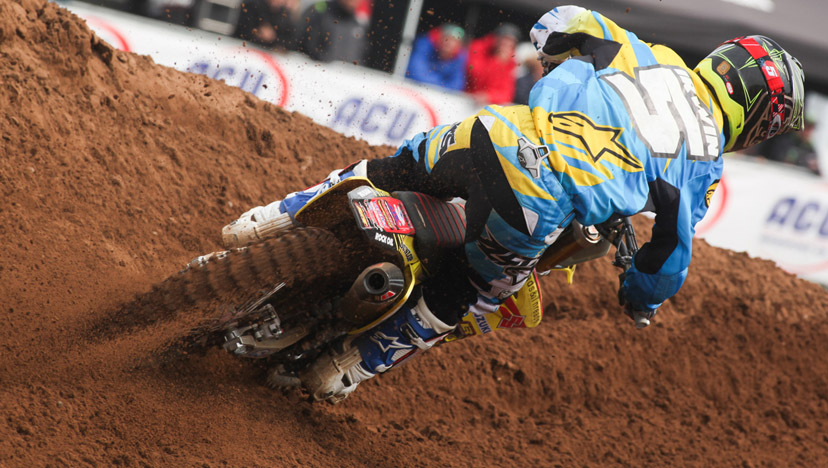 For most people the Easter weekend means staying home, enjoying two extra days of holiday and inevitably hunting for chocolate eggs, but for Heads & All Threads Suzuki, the weekend was just another weekend on the road. This time the road trip took the team north to Yorkshire for a weekend in the Doncaster sand box called Fat Cat Motoparc. The team was down to two riders; Ryo Sato injured his shoulder whilst practicing during the week, but it did not stop him from giving a helping hand where he could.

Qualifying on Saturday morning ended with MX1 man Graeme Irwin qualifying second in his group, while MX2 rider Luke Burton ended his session in seventeenth. After the two groups were combined, the two riders ended on opposite sides of the start.

Luke’s weekend ended before it really got started. After a flagged start in the first raceon Saturday, he made good progress forward, but a mishap over a large jump had him over the bars and head-first in the dirt in the blink of an eye. After hoping that he could return on Sunday morning, he felt unwell in the second race whilst in twelfth and it was best for him to pull out for the remainder of the weekend.

Graeme went from strength to strength on the weekend. After a killer start in his first race, he struggled to get into a groove quickly and lost some positions, ending the race fifth. On Sunday morning, he pulled another fantastic start out of the bag before getting embroiled in fierce battles for his position with several rivals. After thirty long minutes, he crossed the finish line in third. The final race of the weekend didn’t get off to as good a start, but it did not stop Graeme from still putting in a consistent effort in sixth throughout before taking fifth with a few minutes left on the clock. His results tallied up to a fifth place overall on the weekend.

But Graeme was not done yet. After hopping on an overnight ferry to Northern Ireland, he unloaded his bike at Desertmartin for the first round of the Ulster Championship on Monday morning, where he promptly qualified on pole. After winning the first race, he then found himself having to battle back from a mid-pack start in the second, ending just behind JAR Honda’s Matt Moffat. The final race of the day was his again for a convincing win overall on the day.

The whole weekend’s been good for us, Graeme’s raced really really well. I feel that race meetings should be on a track where you can’t really practice, and a lot of people come to practice at Fat Cat and go really well. Graeme’s been here once this year on the practice track, and I’m happy today, no problems, no injuries, and we’re going home safe. Luke had a big crash on the table top on Saturday and had a bit of a concussion, it was best to rest on Sunday and have a few days off and then get ready for next week. Ryo had a big crash during the week and hurt his shoulder, and we now have to wait and see how long it takes to get better. — Neil Prince, Team Manager

In qualifying I was second in my group which put me third once they combined the two, and I was happy enough with that. In the first race, on Saturday, I was fifth and I was happy enough with that, I rode a bit tight and fell back and had to come back through, but on Sunday, the first race I was third and all in all not a bad weekend. Desertmartin was all good but in the second race my clutch burnt out and I couldn’t push, but it was a good day and the track was perfect. A big thanks to Heads & All Threads Suzuki, the bike is awesome. — Graeme Irwin, Pro #15