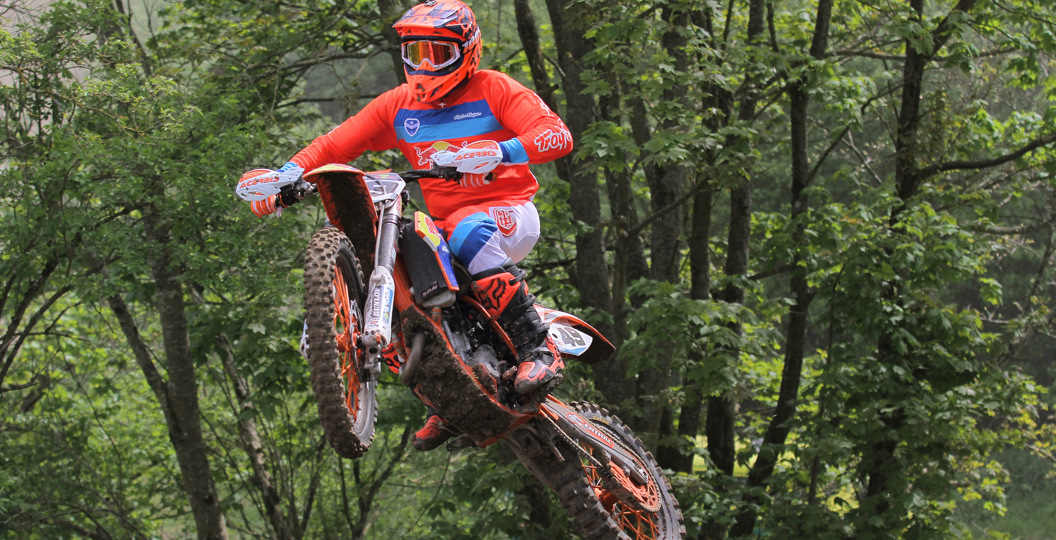 A great day of racing at the fifth round, held at the Langrish track of Ham Lane. The venue had to change from a planned trip to Yarley, due to watering issues. Although the track at Ham Lane is quite small and tight, it made for some great racing. The adult classes were almost full, which shows how much the track is liked.

After the practice sessions were completed, racing would get underway with the popular South Coast Honda-sponsored MX1 shootout. It was a well-known rider, Liam Garland, who showed up and took the lead out of the gate. An on-form Nicky Watts gave him a hard time in second. Garland would lead for a few laps before a small off gave Watts the opening to take the lead, but it did not last. Garland reeled him and retook the first spot; Watts ended up second. Third in the race was Chris Wratten who, if it had not been for a bad start, could have been in the mix with Watts and Garland, as he showed some great speed!

Next out was another South Coast Honda-sponsored race, the MX2 class, where there was some tight racing. Danny Harris would get the first place, but it was not going to be easy. The top four all showed that they had the speed to take the win. Scott Kennedy was riding great all day and Tallon Aspden shared the fastest-lap time of the race with the winner, but it was not fast enough. Kennedy stayed calm and took second, with Aspden rounding out the top three.

The two-stroke and under twenty-three combined race was next and it was the young guns who took the race win. Sam Butler, a rider the club has not seen for a long time, showed great speed and, although he had a tough job keeping Lewis Smith off his back, took the win. George Coughtrey showed some great racing skills and stayed in the chase with the top two, but it is a tough track to make moves on and he had to settle for the third spot.

The fastest two-stroke rider was Rickey Humphrey, who was battling up at the front and stayed there until the end to take the race win. The battle for second and third was very tight; Jim Webber, Kev Wiltshire and Paul Moyes ran almost identical lap times. Moyes would find his way around Wiltshire and would hound Webber in second until the end, but he just could not get the pass done and finished third

The Rookies were out next and there was some great racing in this class. Oliver Cook showed his dominance again, taking all three race wins, but it was not a walk in the park. Jesse Wren rode some of his best races, took two out of three holeshots and led a good few laps throughout the day. Brandon Hickman also showed great speed and consistency going 2-2-3 for second overall. Ross Bundy and Xavier Cook battled in every race, with Bundy getting to the line first in each encounter to take the third spot.

The SW85 and BW85 class is always great to watch and they did not disappoint. After the shower conditions were tough for the second race, but these lads showed some skill and kept on it. Olly Cole showed his dominance once again and took all three race wins, but a very fast Billy Simpson and consistent Austin Wild kept him on his toes and chased him up in all three races. Simpson and Austin would also fight for the second spot between themselves, but Simpson got the job done going 2-2-2. Austin went 3-3-3 for third overall in the BW85 class.

The fastest of the day in the SW85 class was Tyler Kirby, who had some lap times as quick as the top three BW85 riders and went 1-1-1 in his class. Joshua Williams also had an impressive run of 2-2-2 for the second spot and Jack Driver rounded the top three. He only lost out on a third-place finish in one of the three races to Owen Haswell.

Next out and it was the Vets class. Brad Aspden was the best man on the day and the slippery conditions didn’t even slow him down! The only hiccup on the day was losing out in the first race to Daniel Cavanagh and Shaun Brooker, but 3-1-1 moto scores gave him the top spot. Shaun Brooker was in the hunt all day and with 2-2-3 results and finished in the second spot. Noel James and Paul Moyes fought over third. James would get the job done in all three for the third spot, but Moyes showed some great riding on the day. Although he did confuse the club’s banner flag as the chequers and head for the pits, before realising his mistake and continuing the race!

The Helar MX-sponsored main championship, as always, shows the top racers on the day battling had for race wins. Liam Garland would take the lead and check out for the race win, but did not contest race two due to the slick conditions. Craig Daffin had no such issues though and, although he could not get the race win in either moto, he showed the speed and consistency going 2-2 for second on the day. The top spot on the day went to Chris Wratten, who did not have the best of starts but managed 3-1 results and showed some great class on his KTM. Harry Hinson and Fred Heath were both in the mix and battling with the frontrunners. They also tied on points, but Heath took the third spot with the better finish in race two.

Finally, it was the B-Group qualifiers. Sam Purkis easily took race wins in both races for first overall. This was also another race that had positions decided by the race-two finish, showing how close the racing was on the day. Rob Booth (3-2) and Lee Skinner (2-3) battled it out for the second spot, but Booth prevailed.

Well done to everyone who took part. There were some great battles viewed by the spectators. Luckily there were not any major accidents on the day, but to the few that had injuries get well soon and we look forward to seeing you at the next event on the 28th May. The venue is to be confirmed.