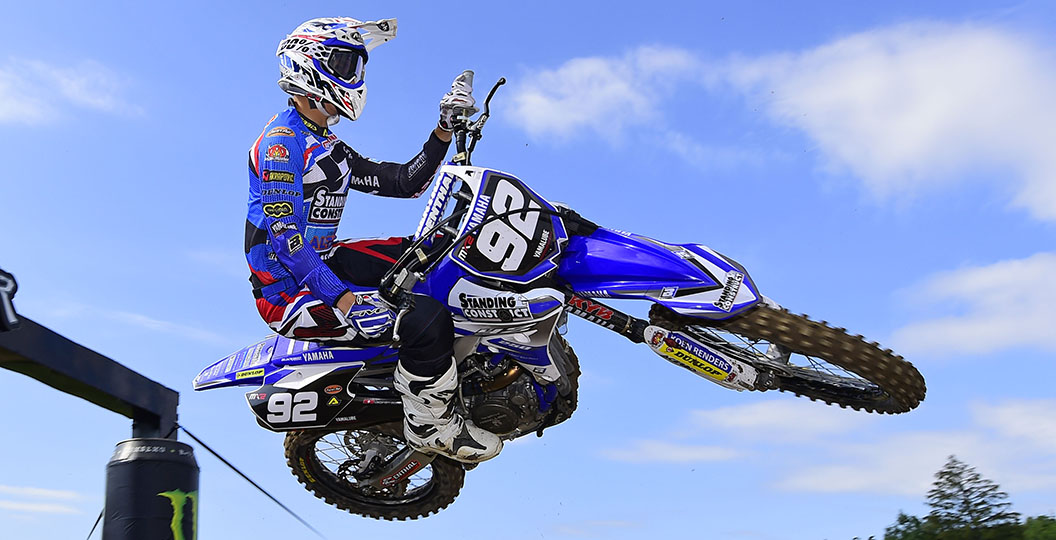 Guillod to stay with Yamaha

Standing Construct Yamaha Yamalube are in the heat of battle for the 2015 FIM MX2 Motocross World Championship title with Valentin Guillod but are already putting tentative first plans into place for their move into the MXGP division with the YZ450F for 2016.

Guillod, winner of three Grands Prix this year on the YZ250F, is obliged to head into the premier class due to arriving at the twenty-three year age ‘ceiling’ for his current category and had confirmed his intention to make his MXGP debut in what will be a third season with the Belgian crew owned and helmed by Tim Mathys.

“It is great to continue with Standing Construct Yamaha and also with Yves [Demaria, mentor and trainer] because at the end of 2012 he took the risk to train someone who wasn’t good and it turned out well. At the end of 2013 nobody wanted to sign me and only Tim came and proposed a deal,” the Swiss commented. “We started this season from zero with the bike and now we are fighting for the title so it is really cool to be part of this team.”

Yamaha Standing Construct Yamalube will expand to a three-rider structure – with Julien Lieber signed to stay – to maintain their direction and focus as one of the front-runners in MX2 with the YZ250F, but will also direct manpower and attention to help Guillod make a splash on the bigger machine.

“Yamaha took us on to get results with YZ250F and I think we have done pretty well,” assessed Tim Mathys. “We have already won three GPs and have more podiums with both riders. The idea for next year was to again set up a good structure for MX2 and I think we have that but Valentin wants to stay with the Yamaha and likes the bike and – even more – he likes the co-operation with the team during the last two and a half years. We originally spotted Valentin as a rider that we wanted to work with in 2012 and we almost had a deal but factors outside of our control meant that it didn’t happen. So I was happy he came onboard at the end of 2013 and we’ve been going upwards ever since.”

“With Yamaha Motor Europe we were able to find a solution to go to MXGP with him,” he adds. “I am really proud, and I respect him even more because he chose the group instead of the money and I know he had some big offers to move away. I think it proves that we give 100%, that we listen to the riders, that we have mutual confidence in each other and that’s why we will be in MXGP.”

“Being able to keep Valentin in ‘Blue’ and enhance our MXGP line-up was a priority for us and I’m very happy and excited that the arrangement has come together and all of us are already curious about 2016,” said Yamaha Motor Europe MX Manager Erik Eggens. “Of course Valentin has a fantastic chance in MX2 for the four remaining Grands Prix of 2015 and it is reassuring and very promising for Yamaha that he will be making the step into MXGP with the YZ450F.”