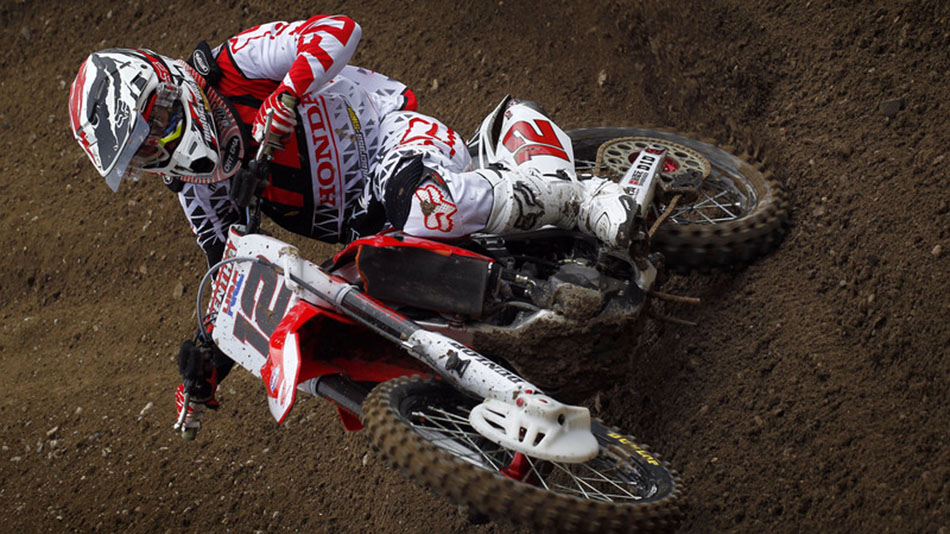 The Grand Prix of Trentino yielded two top five finishes for Max Nagl today, moving him up a position in the World Championship standings.

Max made two strong starts with his CRF450RW, an area on which he and the team have been working hard since the Brazilian GP, and claimed fourth overall after a fourth and fifth-placed finish in the two races.

After finishing seventh in race one, Evgeny Bobryshev crashed in the second race whilst in fifth position. When he was down he was hit by a closely-following Jeremy van Horebeek who didn’t have time to be able to take avoiding action.

Bobby received an impact to his lower back as the bike passed over him, and though he was able to restart the bike and return to the pits he was then was taken to the local hospital for comprehensive medical checks commonplace with an impact to the back.

Team HRC will now head straight to Sevlievo for the MXGP of Bulgaria next weekend – a track that is very different in its nature and character to Arco di Trento.

Max Nagl #12: “The biggest positive from today is that we improved the bike a lot from the starts. I had two good starts where I was right with the first five guys so that’s a big improvement. The team did a really good job with the bike, but all today I was struggling with the track, like it was not possible for me to turn. I could not put the bike flat in the turns because it always moved and slipped so I had the feeling I would crash, so I had to keep the bike upright and then you are really slow. I was really aggressive and pushing hard in the second race behind van Horebeek but the track was very strange and I made some mistakes and just couldn’t make that one second extra that I needed today.”

Keisuke Inomoto, Team HRC Team Principal: “Max had consistent results today in the two races but in the second race there were areas with both riding and the machine setup that we can improve in these slippery conditions. He made two very good starts which we are very happy about as we have been working hard on this area in testing so it shows we are moving in a good direction. Bobby’s riding in the first race was better than the last race in Brazil, but unfortunately in the second race he had his crash, so we hope he is ok.”

Roger Harvey, HRC General Manager – MXGP: “It’s been a difficult day we’ve had today with Bobby getting hurt a bit in the crash – hopefully not too much – and with Max struggling a little bit, but then again he’s fourth in the championship and we’re still in touch with the guys that we need to be in touch with. The testing we did earlier in the week proved to be positive and worked quite well for us so that’s important and quite a good move forward that we can take into Bulgaria next weekend.”