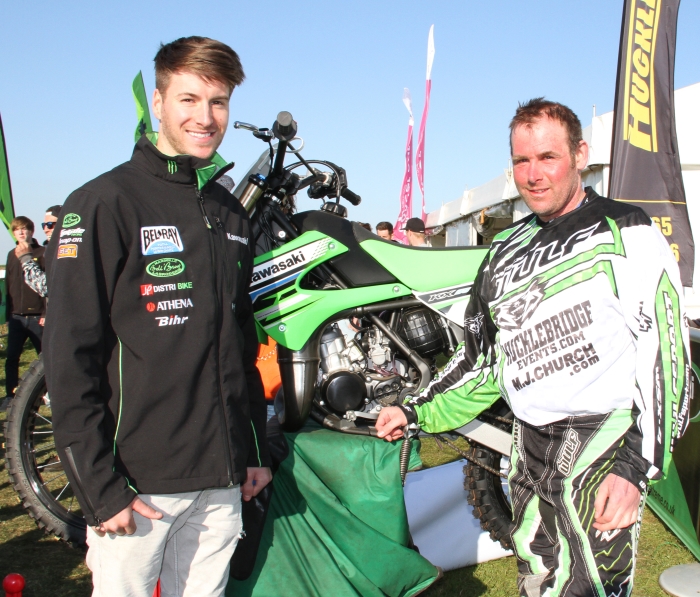 As part of the traditional Good Friday gathering of motocross fans in the Bath area, the annual Mike Brown memorial trophy event took place in ideal racing conditions at the Marshfield track near Chippenham Wiltshire.

With numerous attractions – including a “generations” relay race – the focus of the day was very much on raising funds for the Royal United Hospital and its Forever Friends Appeal in light of the care that the institution is providing for local rider, Mark Hucklebridge. Diagnosed with inoperable cancer, the 35 year old has only recently completed the Bath half marathon between courses of intensive treatment and was determined to ride in the generations challenge despite having chemotherapy just days before.

“So much has gone into this event and the Forever Friends Appeal fund raising that I felt I just had to be on the start line of the race on my Kawasaki KX250F”, said Mark. “With my dad at the top of the track ready to take over when I’d done my laps it was a very special feeling, something to treasure in fact”.

Well known to many for his racing achievements on Kawasaki machinery under the banner of local firm MJ Church, it was fitting that the day also played host to an auction of a motocross bike donated by Kawasaki Motors UK helped and supported by a visit by world championship Kawasaki motocross rider, Tommy Searle.

With a chance to bid via text in advance of the evening auction in the prize giving tent, the existing bid of £2000 was declared the reserve as the live auction took over.

“There was a lot of interest in the KX85 bike during the day and people were keen to see it achieve a good price”, commented Tom Church of MJ Church Ltd who was in the crowd. “Then a local enthusiast who knows Mark well bid an amazing £3000 and the bike was his”.

A regular visitor to MotoXtreme, the Marshfield motocross dealer where the machine was prepared and exhibited in advance of the event, Josh McGill was both surprised and delighted to end up as the winning bidder.

“It all happened so fast and the atmosphere was amazing” said the eighteen year old from Bristol. ”I am really happy to be able to contribute to such a worthy cause and wish Mark all the best with his treatment and further fund-raising activities.”

“Mark had significant racing success on Kawasaki machinery. He was a great ambassador for Kawasaki in particular and motocross in general. We were glad to donate a motorcycle and delighted that the Forever Friends Appeal will benefit from Josh’s kind act. I think everyone was particularly touched that, as a final gesture, Josh presented the KX85 to Mark’s son, Charlie; a testament to how loyal and generous the world of off-road sport can be. ”