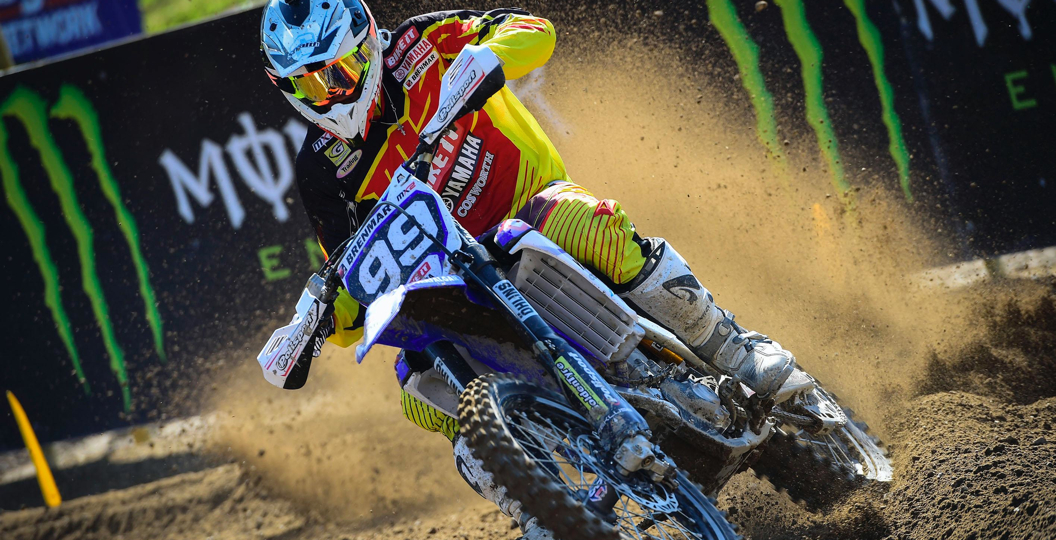 The Belgian GP win was very emotional for Max Anstie and the Bike It Yamaha Cosworth team. After numerous bike problems have prevented Max from showing his potential, everything finally went his way and he got a win. Max has been touted as a future champion for years, but putting the pieces of the puzzle together to match his undeniable talent has taken longer than many predicted. But now he has the monkey off the back and he could go from strength to strength.

We spoke to an extremely happy Anstie, who made it clear just how much this win meant to him and his team.

MX Vice: I don’t know what you did during the week, but where did that performance come from today?!

Max Anstie: We’ve put in a lot of hard work and dedication, it just came together. We were still stressing at the start of the first one and in the second one we didn’t get the sighting lap. The boys have worked so hard, I have been working so hard and even when people lost belief in the team, the bike and myself, we got back to where we started in the beginning of the year. I think it is a turning point and a building block, we have to iron out a few more issues and go to Brazil and Mexico for the last two and hopefully get on the box.

MX Vice: I spoke to Paul Conway, your mechanic, and he was pretty emotional, it is a big win for you but also the team with everything that has happened.

Max Anstie: I can’t explain how much it means to the team. There have been times when it really got to them, everyone was angry and now to give the boys and the team a win has been something special for all of them. You could see with Paul how much it meant to him. That’s why I love my team, from Paul to Ben back at home, they have all put their life into this bike. It is as amazing feeling to put it where it should be.

MX Vice: That first race, when the gate dropped it was like a dream race, you just checked out! Did you expect to pull away from them that easily?

Max Anstie: I don’t know. Yesterday went well, I knew if I hit my lines and my marks I had the capability to do it but I didn’t think I would be that far in front. I didn’t think about being out front I just put my head down and beat my laps in. The last five minutes I backed it off a bit to save some energy. I definitely needed the energy for the second one, because it was the toughest race of my life!

MX Vice: The second race you came through the pack to catch the leader!

Max Anstie: Yeah, I thought I had to pass him and I didn’t know how close Dylan was so it was a tough race but we got the job done and I’m so happy for everyone.

MX Vice: On a personal level you went to America while Herlings and Roczen went straight to GPs, when you came back you struggled a bit, so how good does it feel to get the win that you thought you could get in America and in GPs when you came back initially?

Max Anstie: The last few years, it’s made me who I am. Every world champion, every guy that has won races knows how hard it is. I tell you what from all the teams I have been on and what has worked and what hasn’t worked – I don’t know that it’s really sunk in yet! I have five weeks to think about it I suppose! It’s an amazing feeling and I really think today is the start, it’s a weight off my shoulders. Now we can go to work and go into the next couple strong and keep developing for next year and put us in the position to go for podiums every weekend.

MX Vice: You have said before you can run with Herlings, presuming if everything is ok with the bike and team next year, can you give him some trouble?

Max Anstie: Well, that’s the plan but obviously he has rode amazing all year. To be honest I haven’t had the opportunity to really race him. I know what I have to do.

MX Vice: Finally on the MXdN, a lot of people are saying it should be Dean Wilson for the MX2 spot but you have a GP podium already this year and now your GP win, you have to be in contention now?

Max Anstie: I would have thought I would get the spot, but I have a lot of respect for Wilson for what he has done but we will see. Neil will make a decision and if I’m on the start line in Lativa I will give it 100% for the Brits. It’s just an amazing feeling to be doing it so hopefully fingers crossed!