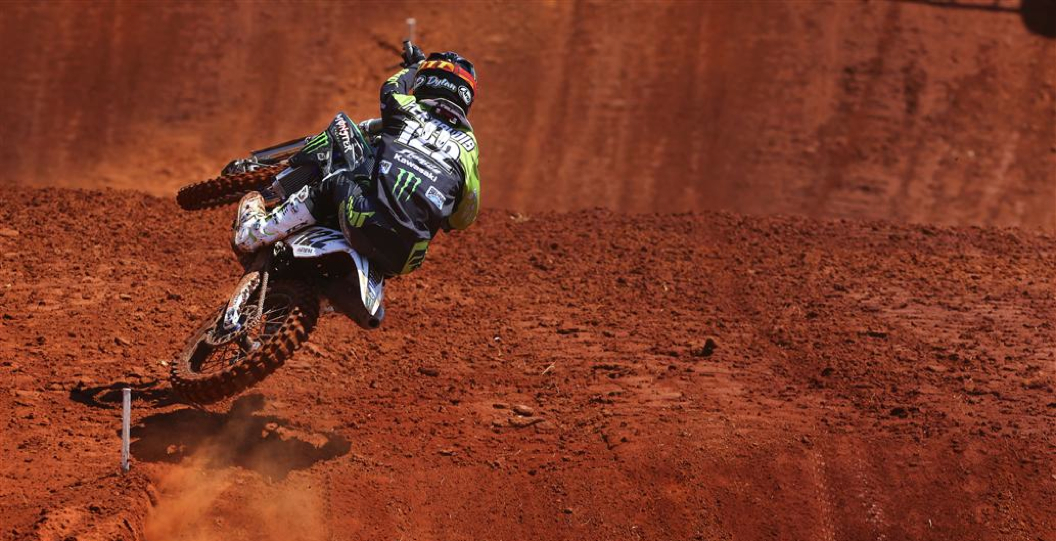 Dylan Ferrandis came close to taking his first GP victory for Team CLS Kawasaki Monster Energy in the penultimate round of the FIM World MX2 Motocross Championship at Trindade in Brazil.

The French youngster didn’t enjoy the best of starts in either moto but proved that he has a keen eye for lines by advancing to second place each time. Unfortunately the leader had opened up a slight advantage whilst Dylan was making the passes stick and he had no chance to catch the eventual race winners. It did appear for several laps that his consistency would pay dividends for Dylan as he was the virtual winner of the GP for several laps until the first race winner managed to secure third place five laps from the end to ease ahead on overall on combined scores. Dylan remains fourth in championship points standings prior to the final round and retains a slight chance of advancing to third.

Arnaud Tonus returned to racing after missing the last five GPs through injury and, despite the lack of race practice, charged from eighth place to third in race one. He faced a stiffer task in race two after failing to make a good start but advanced from thirteenth to eighth to frustratingly miss the overall podium by just a single point. The scoreline has strengthened his hold on sixth place in the championship standings.

Thomas Covington again showed good speed but single incidents cost him points in both motos. The young American held fourth place for two laps before fading brakes saw him drop back to an eventual fifteenth. After another top ten start in race two Thomas collided with another rider on lap two and was in last position when he retrieved his bike from the track fencing. He recovered to fourteenth at the finish and now holds eighteenth place in the series standings.

Tommy Searle, the CLS rider in the MXGP class, had two solid rides in tough competition on his return to racing and, despite still feeling some pain in his wrist, battled resolutely to finish seventh and fourth to miss the podium by just four points. Despite missing six GPs the Englishman is currently twelfth in the championship standings.

Dylan Ferrandis: “I’m happy to get another podium this season, but also disappointed to finish second, only one point behind the winner! My starts were not so good; I was in the top ten each moto but had to fight to come back in each race in second position. We had some very nice battles today; the track was nice to ride, and, although there was mainly one line in many sections, there were some possibilities to pass. It’s never easy to race overseas as you can’t train during the week and spend many hours in planes and airports; this evening I’m tired after my two races, but next week the goal will be to do even better in Mexico, and to finally get that first GP win.”

Arnaud Tonus: “It was so great to be back racing, and I was happy with my riding in the first race as I had good lap times and got a podium result. The second race was more difficult; I missed a good start and then couldn’t find a good rhythm during the first few laps. I’m just missing race practice, and here everyone was riding fast. Saturday was more difficult as I had to get used to riding in competition again. But I had no pain in my shoulder; that’s the most important thing and I’m looking forward to Mexico.”

Thomas Covington: “I had good speed all weekend, but this is not my year and I had some problems in both races. In the first moto I had a good start but then my rear brake faded, and in the second one I collided with Tonkov and went into the fence. I will do my best again next weekend and hope to end the season with a good result.”

Tommy Searle: “I tried to follow Cairoli in the first race but my wrist is still sore. I lost about ten seconds when the front washed out and I crashed without losing a place. I got a better start in race two and finished fourth.”