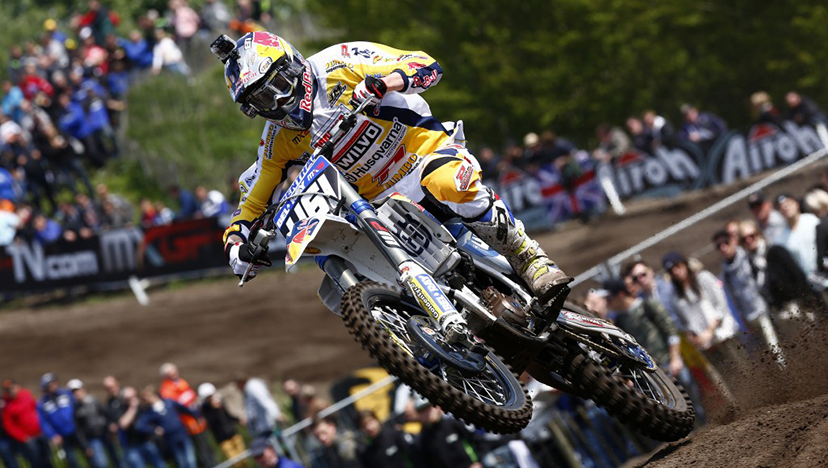 Sixth in qualifying Febvre shot out of the gate in Sunday’s opening MX2 moto, claiming the holeshot and leading early on during the first lap. Unable to match the pace of Jeffrey Herlings, Romain nevertheless held station in the runner-up position lap after lap. As the end of the moto drew closer the FC 250 mounted rider found himself suffering with arm pump. Becoming locked in a two-rider battle for the final podium positions with Jordi Tixier, Romain ended the race third having frustratingly been demoted from the second place position in the very last corner. Aleksandr Tonkov determinedly worked his way forwards during the opening MX2 race to claim fifth at the chequered flag.

In many ways the second moto was very similar to the first for Febvre. Jumping out of the gate to lead as the MX2 riders rounded the first turn, a brief spell in third position was followed by 14 laps holding down the runner-up spot. But with the finish line within his sight Romain was passed Arnaud Tonus and pushed to third, matching his result from the opening moto. Securing a top 10 results Aleksandr Tonkov overcame a not so good start to finish eighth. In doing so he placed seventh overall.

Continuing his comeback from injury, Tyla Rattray ended the GP of The Netherlands in sixth position overall, having placed seventh in each moto. Competing alone for the Red Bull IceOne Husqvarna Factory Racing team following team-mate Todd Water’s recent practice accident, Tyla claimed two seventh place results and delivered his strongest performances so far this season. Starting well in each race Tyla delivered two notably improved performances as he focuses on closes in on the top five in the MXGP class.

The FIM Motocross World Championship continues with round seven at Talavera de la Reina, Spain on May 11.

Romain Febvre: “To get second overall in a really great result. Both races went really well for me, but as they finished I was disappointed that I wasn’t able to hold second both times. In the first race I was battling with Jordi Tixier for two or three laps and got third, and in the second race I was in the runner-up position for so many laps. But I wasn’t able to hold it to the finish. That was disappointing, but to get second overall is really great. The team really did a great job this weekend, it’s such a good feeling to get the runner-up spot.”

Tyla Rattray: “I felt like I put in two solid motos, and took a step closer to the top five guys. Valkenswaard is always a tough track and it certainly got that way towards the end of the second moto. I gated well in both races and felt good. In the first race I started to tighten up a little mid-race, so I relaxed a little and then pushed hard towards the end. I felt fresh going into the second moto and although I made things a little harder for myself by letting a few guys passed early on I pushed hard to climb back to seventh. It’s frustrating that I’m not where I want to be yet, but we’re getting there. My hands are still really tender, but they’re getting stronger. It’s back to hard pack training now ready for next weekend’s GP in Spain.”