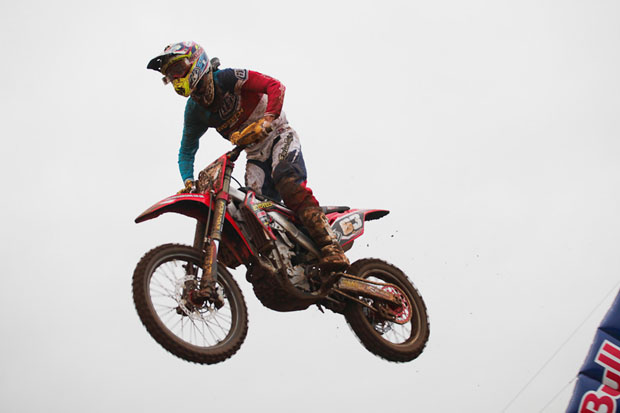 On the banks of the Thames and in the shadow of the Didcot Power Station, the Culham track hosted the season finale of the Red Bull Pro Nationals championship this past weekend. With severe weather warnings forecast for the Sunday, promoter Events 22 switched its schedule around to run the Pro class races on Saturday.

In the qualifying sessions, team riders Jordan Divall, Joe Bamfield and Neville Bradshaw qualified in third and fourth in the Rookies, and third in the Pro class respectively.

Pro rider Bradshaw proved that he was made of tough stuff in his races. Injured after a midweek crash, he kept his nearest rival at bay after a hard-won pass early in the race, taking home a third place and sealing the championship a race early. Opting to go out in the second race, injury notwithstanding, Bradshaw took the class lead a third of the way in and continued to dominate the class all the way to the finish for an overall win and, of course, the championship.

In the Rookie class, Divall was off to a good start. In the first race, he was off the start in fourth and looked to make thing difficult for the leader Jake Millward, but fate intervened. An incident involving a back marker cost him ten positions, and he ended the race in twelfth. The second race did not go as well. This time, Divall finished the race in eighth after moving up into fourth place early in the race. On Sunday morning, the bad weather did not materialise, leaving only consistent rains in the afternoon. The conditions did not do the young rider any favours, and he found himself starting in the back after ending in the dirt off the start line in the third race of the weekend. In his final race of the day, Divall started in the top ten, but found his progress hampered by Lloyd Pettett, ending the race in seventh instead. With his first race result having ruined any chance of taking his championship points a lot further, Divall had to make do with a twelfth overall on the day and a fourth in the championship.

For fellow Rookie rider Bamfield, the first race was a disaster. Disqualified for cutting the track after coming off the track and not re-entering in the same location, he had a lot to prove. Unfortunately for him though, the race ended for him before it even started on the start line. Sunday would prove to be much better. Starting his third race of the weekend in thirteenth, Bamfield soon found himself in tenth and battling his way forward to eighth at the chequered flag. In the fourth race, he once again improved his position, ending the race in fifth after a start in seventh, unable to pass Dam Thornhill for that sixth spot. The final race of the weekend ended in fourth place with another start in seventh, again an improvement for the youngster. With all the racing done, Bamfield found himself ninth overall with an eighth overall in the championship.

Commented team principal Matt Hutchins: “It’s been a fantastic weekend and end to the year for us, Neville bringing the overall and the championship home for us. Jordan’s had another weekend of mistakes and bad luck and wasn’t able to improve his championship position, and Joe’s had a mixed weekend with some crashes, but had a really good, solid fourth place in the last race. I’d say a big thank you to everyone in the team, to Neville and to all of our sponsors who helped us with everything this year.”

Neville Bradshaw (#272): Today was pretty good, a lot better than I thought it would be. Obviously hurting myself during the week and not knowing if I could ride coming here, I luckily had enough points that I didn’t have to do too much. In qualifying I only put one or two laps in to see how the shoulder was, if I could actually ride, and it wasn’t too bad with the brace on. In the first race I didn’t get a great start, I couldn’t hold on to the bike really so I just took it easy, then got onto Steven Lenoir and made a pass on him, and then just rode it out. Towards the finish I had no power in my arm whatsoever, I was making silly mistakes, so I thought I’d just ride it out to the finish. Luckily I managed to get the championship in that race. In the second race I just wanted to go out and finish the race to see how the shoulder would be for next weekend, I knew that if I could finish two races this weekend, and got therapy on the shoulder during the week, I’d be ok for next weekend. I managed to get a decent start, got a good rhythm, and won it. Graeme was coming up towards the end and I could see him, and I managed to gap him at the end and I was really happy with that performance, to ride through the pain like that, it shows that people have put a lot of work in, sometimes things don’t go perfectly, it was making the best of the situation.

Joe Bamfield (#54): Qualifying was good, got fourth which was alright for the gate pick. The first race was rubbish, coming down the hill and got a tank slapper and accidentally cut the track. The second race I crashed on the start and hurt my ribs, which resulted in a DNF. First race this morning I got eighth, still suffering from that hurt rib, the next race I was fifth from a bad start, and then the last one I was fourth. Not happy with the weekend at all.

Jordan Divall (#63): Qualifying on Saturday was good, I had third. In the first race I was doing really well, I came through the pack from sixth or seventh and I had fast lap times in the race until I went down with a back marker and got back to thirteenth. In the first race today I got a good start and went up a bank and the front end washed out, I crashed and cut my arm. I came back to sixteenth in that. In the second race today I got a terrible start and just rode around in seventh, so not happy at all.