The annual Hawkstone International race is the start gun for the outdoor season in Britain, and Evotech Stevens Honda signalled its intention to be a force to be reckoned with by posting a stunning top five result against extraordinary competition.

Qualifying got underway with overcast skies and low temperatures, and the team’s two MX2 riders, veteran Neville Bradshaw and rookie Jordan Divall, ended the session in eighth and thirty-fifth respectively.

With the clouds replaced by bright sunshine, racing got underway at noon. Bradshaw immediately established himself as a front-runner, starting the first lap in sixth and relentlessly putting the pressure on his rivals ahead of him. Throughout, Bradshaw also kept impressive foreign competition in the form of Nikolaj Larsen, Steven Lenoir and Harri Kullas at bay, ending the first race where he started, in sixth. Although the second race started off with a wheel-spin on the start that threw off his timing, Bradshaw made quick work of several riders in the first half of the race, finding himself wedged between Larsen and Glenn Coldenhoff for the remainder. A fifth on the finish line earned him fifth on the day as well as a place in the super-final, from which he emerged as the sixth-fastest MX2 rider. 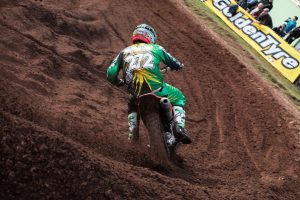 For Jordan Divall this race was the jump to the big league. Although his first start left him in the back of the pack, the youngster soon found himself nudging the top thirty. Several small mistakes cost him time, positions and pride, and he ended the race in thirty-third. The second race looked much improved with a mid-pack start turning into a position in the top twenty-five, but a stall dropped Divall back into the thirties, from which he valiantly fought to recover. With mere laps to go, he took ruthless advantage of mistakes made by other riders to leap-frog his way to twenty-seventh on the finish line.

“It’s good to have the first race out of the way,” commented team principal Matt Hutchins. “We struggled with the starts a little bit; in the second race, Neville had to choose a different gate because his was taken, so he ended up with some wheel-spin. Other than that, he rode really solid today. Jordan also had a good day. He had a few crashes and stalled it in a few places, but he kept at it and we have a little bit of work to do, but overall I’m pleased with the way things have gone today.”

Neville Bradshaw (#272): “Today was pretty good. Qualifying went alright. In the first race I ended sixth; I rode a little bit tight because it’s the first race of the year. The second race I rode a bit better and ended fifth. I came through the field and felt that I rode better. Fifth overall on the day is pretty good with quite a stacked field with all the GP riders out there. My fitness is good, and there are a few things we’re going to work on during the week and working towards the first round of the British championship.”

Jordan Divall (#63): “Today I made it into the main race after I qualified in thirty-fifth. In the first race I didn’t get a very good start, it being on the inside. I pulled through a little bit and managed to get to twentieth for a couple of corners before I landed on someone, and it just went downhill from there. I crashed a couple more times and went over the bars, so it wasn’t a good race. In the second race I didn’t get a good start again. I went up a few places, stalled it, then came through a few places again and managed to pull through to twenty-seventh at the end of the race. I’m happy with it; I am a bit annoyed that I didn’t qualify for the super-final, but it’s only the first meeting of the year.”