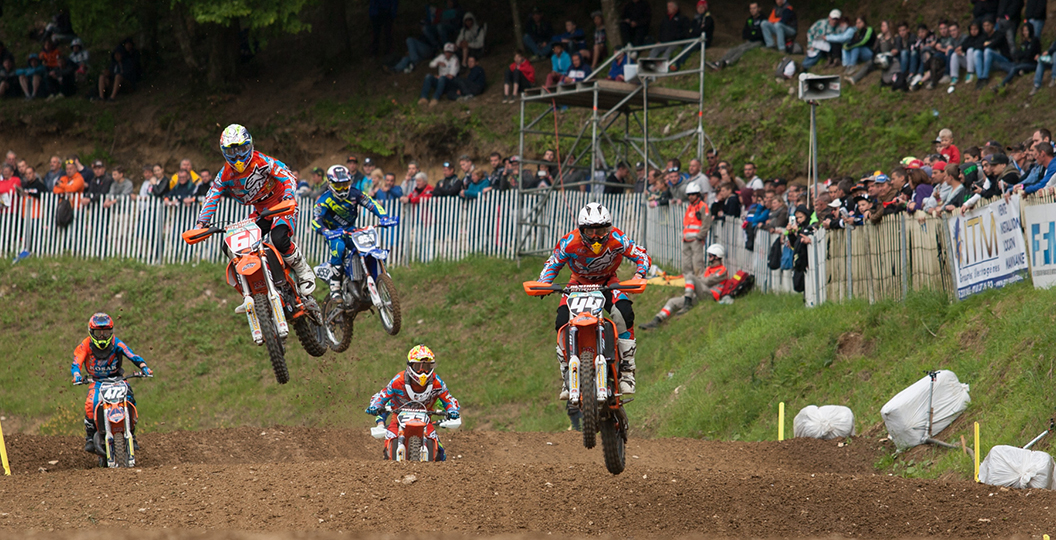 There has been a packed schedule at recent GPs, with multiple EMX classes taking to the track over the weekend. In France it was a little quieter, however, as just the 125 riders filled the supporting role. This was to the delight of the fans though, as the EMX125 class has arguably provided us with the most hair-raising racing thus far in 2015.

The opening moto of the weekend was consistent with what we have witnessed at previous rounds, as the three KTM Factory Junior riders shot out to the early lead and looked set to control the race. It was the young Spaniard, Jorge Prado Garcia, who occupied the top spot initially. However, a packed third lap featured multiple position changes and saw Josiah Natzke leapfrog his two teammates to take the lead. Maxime Renaux also entered the fray at this point, to the delight of the home crowd.

Josiah and Maxime were unmatched at the front, in the end, as a handful of mistakes mid-race saw Prado drop back slightly. His smaller stature saw him struggle more in the waves, whilst his taller competitors could muscle the bike through the section. However, on the opposite end of the scale, Renaux’s size saw him struggle for power up the hill. None of that really mattered in the end though, as Natzke was unchallenged as he romped to a seven second lead.

Renaux took the holeshot in moto two, although didn’t quite possess the speed to keep Josiah at bay; it took no more than a lap for the New Zealander to take the lead. He wasn’t the same dominant force this time around though, as Prado stormed through from outside the top five to take over the top spot. Natzke immediately responded though, as he retook the lead and dropped his lap times. This broke his younger teammate, as the Spaniard lost touch in the following laps. Consequently Josiah took the overall, the first of his career, and gained eight points in the title chase, making him a very real threat to the top two, Prado and Renaux, who filled the lower steps of the podium respectively.

What happened to the British riders? Mewse had an odd weekend, with mediocre results. Despite pushing his teammates early on in moto one, he soon dropped off the pace and a few mistakes relegated him to sixth. An awful start on a track that was tricky to pass on hindered him in moto two, although he did well to move from nineteenth on lap one to fourteenth at the finish. A crash dropped him back even further early on, too. It has really been a learning year for the promising Brit.

The rest of the British riders had worse weekends. Taylor Hammal made the cut after qualifying through the LCQ, although didn’t make it far in moto one before dropping out. He then didn’t line up for moto two. Pocock and Booker failed to qualify, although once again showed that they have the speed. Some luck, and a decent start, is all they need. Brett was actually riding with two broken ribs, so it was a valiant effort from the GL12 Yamaha rider.

The riders will continue their streak of races at round nine, Maggiora, in two weeks, where they will also be joined by the EMX300 riders.