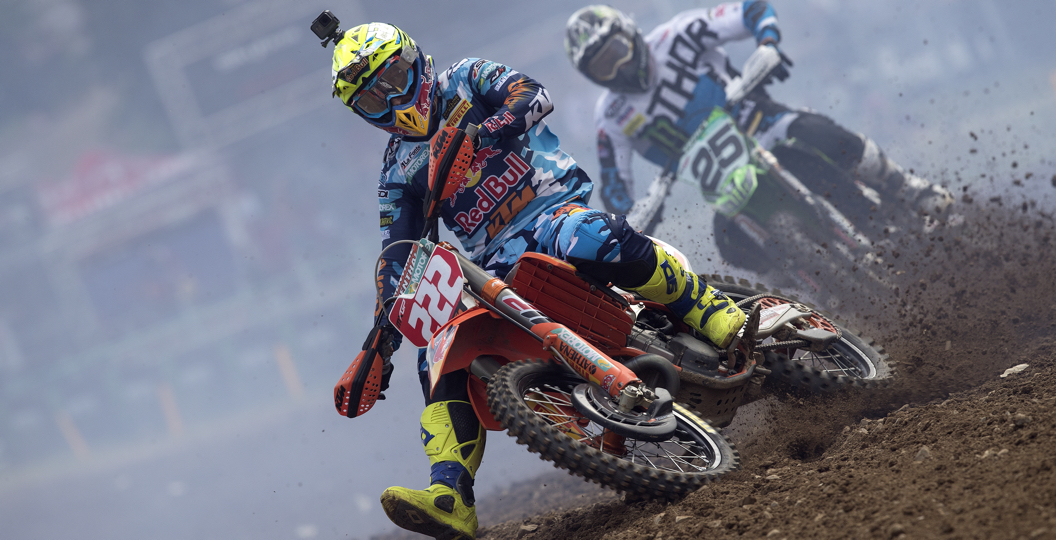 The FIM Motocross World Championship is heading towards the second half at an alarming speed, so now seems like the perfect time to reflect on what has transpired since February. Countless surprises and disappointments have made this one of the more memorable seasons in recent memory.

1st Antonio Cairoli (347 points): This is a story that we are all too familiar with, right? Consistency is the greatest tool that Antonio Cairoli has possessed through nine rounds and, much like the last time that he claimed a world title, the rest of the contenders have struggled to match that. Has he shown awe-inspiring speed each week? No. That is okay, however, as that is not a necessity in a field as deep as this.

It is extremely difficult to foresee Cairoli losing control of this thing; he would need to have at least one DNF just to allow his rivals to get close. Although those have occurred more frequently in recent years, there is no reason to question his bike or body this time around. The comfortable lead that he is currently sat on will just make him more of an indestructible force, as a fifth on a bad day is now more than good enough. Gautier Paulin and Clement Desalle – the riders who trail him in the points – are hardly known for their consistency anyway.

2nd Gautier Paulin (297 points): A nice comeback for a man who was not considered a potential title contender in the off-season. That was an unforgivable error though, as his pedigree speaks for itself. It is quite clear that Paulin has found a happy place beneath the Rockstar Energy Husqvarna Factory Racing awning and holding onto this position in the second half would make this a successful term. Can you believe that he has only finished second in the series once? That was during his maiden season with HRC.

3rd Clement Desalle (289 points): This is interesting for a few reasons. Of all the free agents in the Grand Prix paddock, Desalle is undoubtedly the hottest commodity. The journey that Desalle has embarked on across the last eighteen months is remarkably similar to that of Eli Tomac. Injuries and various set-up issues hindered his maiden season with Monster Energy KRT, but a full off-season has enabled him to turn things around somewhat. The chances of him re-signing with his current team seemed rather slim six months ago, but the relationship is starting to blossom.

4th Tim Gajser (261 points): Oh, what could have been! This sport moves on at such an alarming rate that most have already forgotten about just how great Tim Gajser was at rounds three and four of the FIM Motocross World Championship. At that point it seemed that we were destined for a mundane affair, as he topped the lap charts in a majority of the sessions. A series of unfortunate crashes since the Grand Prix of Latvia have cost him a substantial amount of points though.

If Gajser were currently fighting fit and raring to go in Russia, I would confidently state that he is not out of this thing. That is not the case though – a broken shoulder blade will stop him from taking part at round ten – and he is about to drop even further behind.

5th Jeremy Van Horebeek (261 points): Jeremy Van Horebeek is the forgotten man in MXGP. How many people really know that he currently sits fifth in the series standings? Van Horebeek has performed exceptionally well at points this season and is undoubtedly on the verge of a Grand Prix victory, which would be his second in the category and third of his career. Starts threaten to stop him from achieving that yet again though; he has struggled to get out of the gate more often than not in recent years.

6th Jeffrey Herlings (253 points): It will not be long before Jeffrey Herlings enters the top four in the points. The fact that he is still sixth, even after five brilliant rounds in succession, serves as a bold reminder of just how bad those first four rounds were. The fact that Herlings is now a contender again and could win whenever he lines up on the starting line is a massive boost for the series and, hey, he is not out of this thing. ‘84’ would need some help to win this title, but he is arguably the one who Cairoli is most concerned about.

7th Evgeny Bobryshev (214 points): Considering all of the issues that Evgeny Bobryshev has dealt with this year, to be sat in seventh in the points is a commendable achievement. A broken collarbone has stopped him from even racing the last four motos! Before that ‘777’ was closing in on a moto or overall victory, but was hindered somewhat by a blood issue that was identified ahead of the Grand Prix of Latvia. Although a return date has not yet been identified, don’t be surprised to see him return sooner rather than later. The common consensus is that Bobryshev will be back with HRC for an eighth season next year.

8th Romain Febvre (209 points): Romain Febvre has scored points in every single moto this season – take a moment to digest that. One could be forgiven for criticising ‘461’ and panicking about how he has performed thus far, but there was a glimmer of hope at the most recent round of MXGP. The results did not exactly reflect how he performed, much to the dismay of the fans, but it seems that he is finally making inroads with his set-up. Febvre must replicate that showing in a neutral location in order to quell all doubts.

9th Max Nagl (200 points): Nagl has actually won a moto this season, which is something that only six other riders have achieved thus far. That may not be enough to save him, however, as his contract with Rockstar Energy Husqvarna Factory Racing will expire at the end of this season. Starts are largely to blame for all of the issues that he has encountered through the first eight rounds, but speed has not exactly been prevalent in any of the practice sessions. Where Nagl fits in in this stacked division remains a mystery.

10th Glenn Coldenhoff (176 points): Glenn Coldenhoff may be in danger of losing a position inside of the top ten, as a majority of the guys behind him are bouncing back from misfortune of some kind. Coldenhoff has had an extremely steady season – a runner-up finish in Indonesia is undoubtedly the highlight – and rarely shown that he is capable of defeating the established frontrunners.

One could argue that a series of consistent outings is all that a factory team is looking for out of their second rider, but Coldenhoff undoubtedly hoped to achieve much more. Coldenhoff, like many riders, will be hunting for a new contract right now, but it would not be surprising at all to see him occupy a position alongside Cairoli again next year. ‘259’ fits in well beneath that awning.