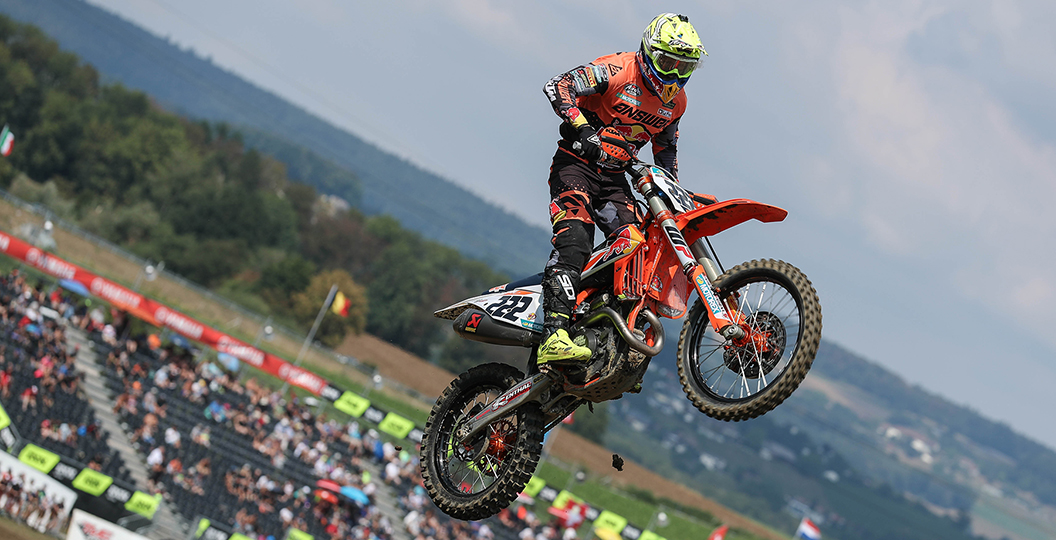 Day One: MXGP of Switzerland

The opening day of the Grand Prix of Switzerland, the sixteenth round of the FIM Motocross World Championship, had a lot to live up to. Fans were desperate for more of the incredible action that took place at the same facility a year ago. The premier-class qualifying moto, which featured the greatest Swiss stars, delivered though.

Antonio Cairoli took pole position, for the second time in three rounds, but really had to work for it. Cairoli was demoted to fourth early on whilst Tim Gajser sprinted away at the head of the field, so it did not necessarily seem as though he was going to be much of a factor. Instead, however, he kept chugging away and eventually leapt to the head of the field in the last couple of laps. “I am really happy about the qualification race,” Cairoli said in a post-race statement at Frauenfeld-Gachnang. “It is a nice track, which I like a lot. Normally it is time to make some better races and try to attack a little bit more than what we did in past races.

“My goal is to stay in front and win as much as possible, then see what is happening in the back,” Cairoli continued when reflecting on his current position in the standings. “There are still a lot of races and the points gap is not too big. From now on we try to stay a little bit closer and in front as much as possible. I will do everything I can to stay in front and see what happens. We have some races to go and I am looking forward to it. I am healthy now, feel good and have tried to do some better training in the last couple of weeks.” Cairoli will start from pole position for the fourth time this season tomorrow.

The race seemed as though it was going to belong to Tim Gajser, it really did, then things began to unravel, so he was left circling with very little intensity. A rear-brake problem left him with no choice but to pull to one side and allow the leading four riders to pull clear. Questions were raised about whether he would even make it to the finish line at that point in the moto, as he slowed so much, but he managed to pick the pace back up again after getting demoted to fifth. The times that he was posting were not at the same level as they were earlier on, admittedly, but he stopped the bleeding and was running a respectable pace, hence why he held on for seventh.

“Today I enjoyed my riding in all sessions,” Gajser said in a team statement. “It felt good to take the holeshot in the qualifying race and soon enough I was able to put together a nice margin on second place. I found some very good lines which helped me ride very smooth. It’s a shame that the rear brake level bent, because I was unable to use it in the final laps of the moto and that cost me a few positions as well as the qualifying race win. I’m really looking forward to the two races, because I love this track and the bike is perfect, so I must thank the team as always for their great job. Hopefully the weather stays the same.”

Finishing seventh in the qualifying heat meant that Tim Gajser crossed the line with Jeffrey Herlings firmly in his sights. That does not sound too bad, does it? The problem is that Herlings actually crashed in turn two, re-joined the race in dead last and charged forward to that spot. It was a phenomenal ride that cannot leave his competition with much hope for tomorrow. It is just a shame that it was not a full-length moto, because it would have been extremely interesting to see what he could do with an extra ten minutes to play with. Fourteen seconds separated him from the eventual race winner at the chequered flag.

It could have been even better for Herlings too, had he not made a mistake at the halfway point and run off the track briefly. Sixth was actually the spot that he acquired in race one twelve months ago, following a straight-up duel with his competitors, which puts his ride today into perspective. Herlings still claimed the overall victory on that day as well! It is tough to bet against him for tomorrow, which is hardly breaking news, but if he suffers a similar issue on lap one then it is going to be one heck of a show. The last time that he finished this far down the order in qualifying was at the European Grand Prix in April, where he had that spectacular crash.

All eyes were on Herlings in that qualifying race and understandably so, but that meant that some great rides went unnoticed. Romain Febvre was simply phenomenal in the second half, as he recorded the best lap of the race on lap eight and charged all the way into second. The times that he recorded in that portion, when compared to Cairoli, paint the full picture and are featured in the table below. Herlings is chucked in there as well, so that his pace in traffic can also be examined. There are many elements to pay attention to. It is easy to see why the heat today left fans so ecstatic!

Max Anstie was equally as impressive and will undoubtedly contend for a spot on the podium tomorrow. Jeremy Seewer, who was a little further down the order, showed plenty of potential through the first half of the heat too, as he inched closer to the lead group and matched their times. It would be most interesting to see him grab a holeshot and then attempt to hold onto the race lead, as he may surprise a lot of pundits. Keeping Jeffrey Herlings at bay would obviously be a tall order. However, staying ahead of riders like Antonio Cairoli and Clement Desalle seems doable. It is about time that he climbed up onto the overall podium.

“It feels amazing to race at home,” Seewer said following the heat. “I live not far from here and, for Switzerland, this is a big event. Motocross is not too big in this country and we do not have too many opportunities to practice, so I just hope this event will change this a bit in the future. I felt really good all day and enjoyed it. I made a small mistake in the qualifying race and lost some positions. I was behind Tony, which went well, so I tried to enjoy it. I will try to do the same tomorrow; get a good rhythm, have a good start and then just enjoy the whole event.”

The MX2 class was not quite as gripping, but it was pleasant to welcome Hunter Lawrence back to the head of the field. Lawrence has had a rough time with injuries, hiccups and other problems that have forced him to accept mediocre results. The way that he rode today was reminiscent of how he looked at the Grand Prix of Patagonia-Argentina though, which was the last time that he was at one hundred percent. Finishing on the podium would be a major leap forward for the Australian star, but just imagine what a story it would be if he stands atop the box for the first time! Doing that could spice up the title chase as well.

Hunter Lawrence would have won the qualifying moto, his first of the year, had he not stalled his CRF250R. Jorge Prado took control of the race at that point and the race belonged to him from that point on. “It was a good qualifying race,” Prado said following the heat. “I could make a good start and a small gap, then I made a small mistake and crashed. It took a bit to get in my rhythm, but I could make good laps again and was feeling good. I am happy with the win and we will see how the races go tomorrow. I think, if you are inside of the top ten, it is still okay. I am first and can choose where I want to go. That is an advantage, for sure, and we will try to pick the best gate.”

A final note should go to Jago Geerts, who piloted a 2019 YZ250F in a race scenario for the first time today, as he had a vicious crash early on in the qualification heat and left with medics. It has now been confirmed that he sustained a broken collarbone in the spill, so it is likely that he will not return to action until the Grand Prix of The Netherlands in a month at the earliest. There is no timeline on his recovery at the moment though.