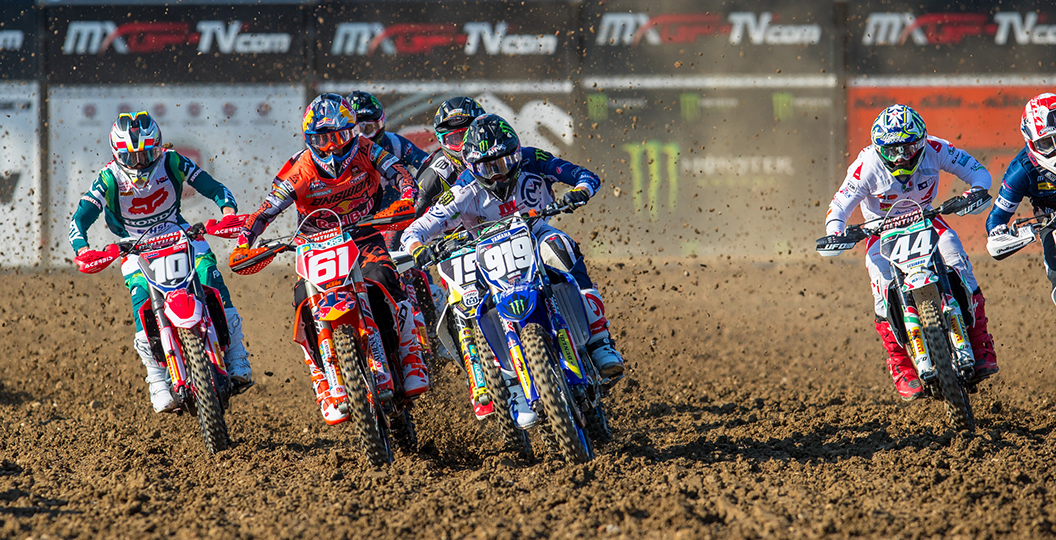 Day One: MXGP of Italy

The final round of the FIM Motocross World Championship is well underway, as qualifying is complete at the all-new circuit of Imola. Although the respective title fights are effectively over now, seeing as Pauls Jonass is on the other side of Europe and recovering from surgery, the results did not exactly stray from what is considered normal. It is not like that comes as a surprise though, as everyone knows exactly what to expect at this point.

Jeffrey Herlings dominated proceedings right from the start of free practice earlier today and has given his competition a lot to think about as the sun sets. It should not be possible for a guy to go more than a second faster than anyone else on a track like this, which was also said after the Grand Prix of Bulgaria, but he finds a way somehow. “It was a good day,” he said when discussing his latest triumph. “I am still really motivated for the last two races. The main goal was to win the championship, but I do not want to just come here to just ride around. I still want to come out and try to prove myself.

“The goal for tomorrow is to get the same start as today,” he continued. “The track is pretty small and tough to pass, I would say, so I think the start is very important. Especially in the second moto, because then the sun will be down and that will be hard to see. Today was a great day; fastest in free practice, fastest in pre-qualifying, holeshot and led all of the qualifying moto. I look forward to tomorrow. I will try to get two good starts and finish out the year strong. It would be nice, after a great year like this, to finish the year with eighty-four GP wins, so that is our goal for tomorrow.”

There are obviously many, many reasons why Jeffrey Herlings is so much better than his competition. It is very clear where he was at his best on this track, however, as he put a significant amount of time on everyone else in sector three. The longest uphill acts as the start of that sector and then it stretches through turns nine and ten as well. The chart below compares his times on that particular part of the track to the rider who eventually finished second, Clement Desalle.

Clement Desalle is one to watch this weekend for a couple of different reasons. The hard-pack surface plays to his strengths, which obviously means that he will more of a threat then he is at a circuit like Assen, then he is locked into a duel for a bronze medal with Tim Gajser too. The pair are separated by twenty points at the moment and therefore it is unlikely that anything will change there. It is not out of the question though. A single mistake would turn everything upside down and rob Desalle of his first medal in five seasons. It is long overdue, which is something that most would agree on, as injuries have stopped him on more than a few occasions.

It is impossible to go any further without discussing the breath-taking crash that Antonio Cairoli had in the first half. It was a slow start for him anyway, as he had to claw his way up to eighth in the first five laps, and then he obviously did not progress any further than that. The crash was spectacular and left spectators in a state of distress, but it sounds like everything is fine. There are lingering issues from previous falls that must be considered, of course, but it sounds like he is just beaten up. Cairoli confirmed that he will race tomorrow on social media.

Onto the MX2 class, where a champion has kind of been crowned. Jorge Prado has received a lot of support and kudos from those in the paddock on clinching the world title, even though it is not technically over yet. There is no way that he will lose it now, because Pauls Jonass is not actually here, but is it not a bit early to break out the special graphics and number one plates? It just feels a little odd. It was business as usual for him on track though, as he disposed of Ben Watson after a brief tussle and then created a comfortable gap whilst en route to his tenth heat win of the season.

“[On] Thursday morning I got the news that I was the new world champion, because [Pauls] Jonass decided to get surgery,” Prado said. “That made me world champion. Coming into this GP, I was for sure happy after hearing this kind of news. This is a track that I like, I have been enjoying it and I do not have any pressure. The track was good. This is like a second home GP. Claudio De Carli is from Italy, so this is really important and a special GP. It is also the last one, so it is always pretty nice. I am feeling good for tomorrow. Today I had a good qualifying race.”

There were only a handful of talking points in the MX2 division, aside from that dominant showing, and a lot of those revolve around the Yamaha riders. Ben Watson claimed his first holeshot in the FIM Motocross World Championship, something that he said made him tighten up and not flow like usually does, and then he held on for second at the chequered flag. Anthony Rodriguez was also impressive en route to fifth, which was incredible considering the fact that he was extremely sick and dislocated his shoulder two weeks ago. Will he be able to hold on in the motos tomorrow? That could, unsurprisingly, be a much tougher task.