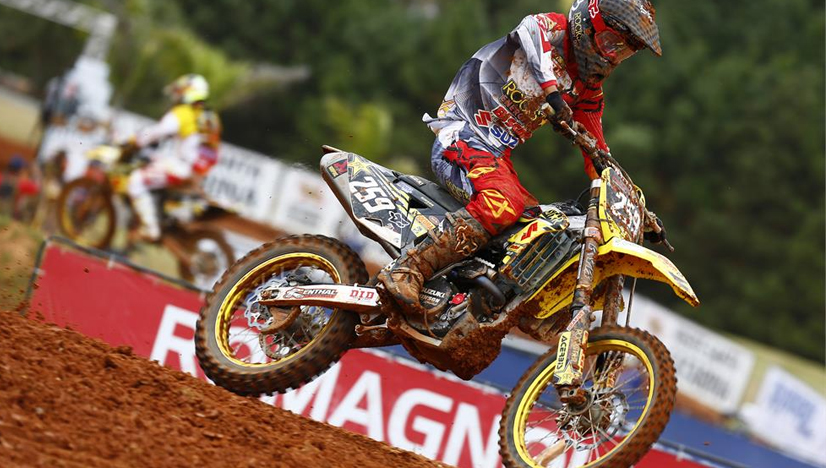 Rockstar Energy Suzuki Europe’s Glenn Coldenhoff followed up his rapid pole position at Beto Carrero for the Grand Prix of Brazil with his second podium trophy in three events.

The Dutchman finished as runner-up on the RM-Z250 for what was a suffocating and demanding third round of the FIM Motocross World Championship. Coldenhoff also logged a small career milestone by comfortably winning the second moto for his first chequered flag and first for Suzuki since 2010.

Cloudy skies and a stiff breeze coated the first Brazilian appointment for the MX2 squad on the 2014 slate of GP racing but the 30+ temperatures remained and the hard-pack and rough red terrain of the jump-laden circuit was hard work. The 35,000 crowd lent the action a noisy and fun atmosphere as the hard-core racing fans lapped-up the action among the MXGP and MX2 fields.

Coldenhoff had already laid his marker for a promising result at Beto Carrero by marching to his first Pole on the RM-Z250 on Saturday and the first for Suzuki in the class since the ‘10 season. The Dutchman didn’t get the best of starts in the first moto and misjudged his race strategy by losing the tow of the leading quartet. He rode to fifth position and was keen not to make a similar misjudgement in the second sprint. Despite a series of brief showers helping to carve the dirt into a series of berms and treacherously deep ruts, Coldenhoff attacked the course and forged a race-winning margin ahead of Arnaud Tonus. Number ‘259’ even felt comfortable to ditch his goggles midway through the race and coasted to a memorable win.

The runner-up result assisted Coldenhoff to second in the MX2 standings and with just two points splitting the Suzuki man and Tonus at the top, the battle for the championship is tight and fascinating.

For team-mates Julien Lieber and Jeremy Seewer, Brazil provided yet more learning opportunities. The Belgian had a difficult day to 14th overall but it was the Swiss rookie who really caught the eye. Seewer benefited from two lively starts on the RM-Z250 and with steady performances to 10th and sixth snared a decent ninth overall. The result was his best at world championship level to-date and his second moto ranking is his highest yet.

Once back in Europe this week the Rockstar Energy Suzuki Europe team will enjoy a free weekend before successive Grands Prix in Italy and Bulgaria and then the launch of the 2014 ADAC MX Masters championship in Germany.

“Overall second place is not too bad, but I am also working for that red plate.
The first race didn’t go how I wanted it to. I really messed it up! I pushed really hard in the beginning and couldn’t pass the others so I decided to slow down a little bit to have a go again. But then I couldn’t find a good rhythm and it felt like everybody was passing me. Anyway I stayed on the bike and for a bad race, fifth position wasn’t too bad. I got a good start in the second and went straight into the lead. I almost led all of the laps. It was really warm and I had to throw away my goggles when they started fogging up. A first-ever win is always good! Arnaud was riding really well so I knew it was going to be tough to win overall but two points away from the championship lead is OK.”

“My feeling yesterday was not the best and I was struggling a little bit with the track; it was slippery with deep ruts. Today I felt really good on the bike; it was great. Everything was working well; the suspension, engine…all. I was very happy and got two good starts which was the main thing for this result. In the first five laps I was keeping the same rhythm as the guys before me and the speed was good. I didn’t make many mistakes so I’m really happy with 10th and sixth and I’m looking forward to do this again.”