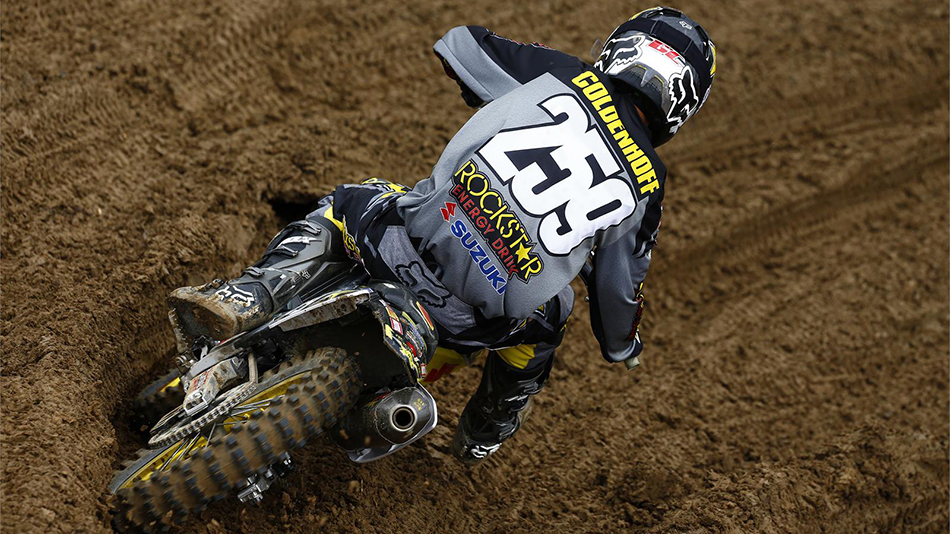 Coldenhoff races to seventh at Sevlievo

The Grand Prix of Bulgaria drew the FIM Motocross World Championship up to the fifth round of 18 and the spectacular but rutted-out Sevlievo circuit was the stage on which Rockstar Energy Suzuki Europe’s Glen Coldenhoff took seventh position overall on his works RM-Z250.

Some 20,000 spectators found some dry spots on the Sevlievo hillside as decent weather on Saturday – and in the first part of race-day – dried the facility that had been hit by rain during the week. The effect of the showers on the track helped to create a bumpy and rutty surface for what is usually a hard-pack, one-lined racing course. The soil was softer than usually found at the impressive circuit near the small town of the same name and the riders enjoyed more traction; especially compared to the slick dirt found last week in Italy. From the middle of the afternoon on Sunday, the black skies returned and the second moto for the MX2 collective was a muddier and deceptive greasy challenge.

Coldenhoff, holder of three consecutive podium finishes and just six points from the very top of the MX2 championship standings, struggled to get going around the altered Bulgarian layout. His starts were not terrible but neither near the point of putting him in contention for the holeshot. From his top-10 slots around the opening laps of both dry and wet motos, Coldenhoff reached seventh position twice for the same ranking overall.

Jeremy Seewer backed-up his personal best finishes at the Grand Prix of Trentino last week with another solid display: The rookie was forced wide on the first turn of Moto1 and was actually part of an opening corner pile-up in Moto2 but both times rallied through the pack to register ninth and 10th positions by the chequered flag.

Julien Lieber is striving for confidence and some racing-form to match his ability and potential for top-10 results. In Bulgaria, the young Belgian was returning to the scene of his knee injury in 2013 that unfortunately cast him to the sidelines for the rest of that season. Lieber scored a decent 11th in the first moto but was part of the same crash as Seewer at the start of the second and manfully completed the rest of the race without a rear fender and a damaged set of handlebars. He at least bagged some points with 18th.

Sevlievo saw yet another almost-full compliment of the Rockstar Energy Suzuki Europe team in action: Brian Hsu joined the ranks and racked-up combined results of third on Saturday afternoon and fifth Sunday morning with his RM125. The teenager was slightly disappointed with the second race in which some mistakes and discomfort around the track meant he was unable to catch the top three. Hsu has accumulated 69 points after two races and faces a 26 gap to Davy Pootjes at the top of the table.

Rockstar Energy Suzuki Europe will now switch its attention to domestic competition with the first round of eight in the German ADAC MX Masters championship starting in Drehna next weekend before the Grand Prix of the Netherlands awaits at Valkenswaard on May 4th.

Glenn Coldenhoff: “For sure tough! The track was really difficult and I was struggling all weekend long. In the first moto I gave it my ‘all’ but finished in seventh; not good and I’m disappointed but I did the best I could. The second moto was better but still not what it should be. I passed Ferrandis and got caught in a rut. It dragged my gear lever and hit the bike into neutral. It cost me a lot of time. So, I’m disappointed but it is my home GP next and I will be going very hard for payback there. I have two weeks of training now and two races next weekend which I have chosen to do in order to get some mileage but in between we will be doing what we can to be ready for Valkenswaard.”

Jeremy Seewer: “Not too bad today; first race ninth and second race 10th and my speed was there but my starts were not the best. I got pushed-out in the first corner of the first moto and was knocked down in the second! I came back well in the first race and I was battling with Anstie. I was happy with my fitness. In the second I did what I could from the back of the pack and my pace was really good. Even though I was a little bit unlucky, I will try to be further ahead in the starts. I think one problem was the muddy ground just outside of the gate and the only way to avoid it was to go for a slot right on the outside which I did not want. Anyway I’m happy with the speed and that’s the most important thing.”

Julien Lieber: “A hard day but the top-10 is getting closer. I didn’t have much luck today and in the second moto it felt like half of the gate was on top of me in the first corner. I had to come back as hard as I could in both motos. The results are not good but I am doing what I can to take confidence and be better.”

Brian Hsu: “I’m a little bit disappointed. I preferred the track more today than yesterday. It was drier whereas yesterday it was too tacky. I rode tight in the second moto and was making mistakes. It meant I could not catch the others and I should have been further forward. I’m getting points in the championship but I came here to win and didn’t manage that. We will look at the reasons why and try to put it right for the next round.”