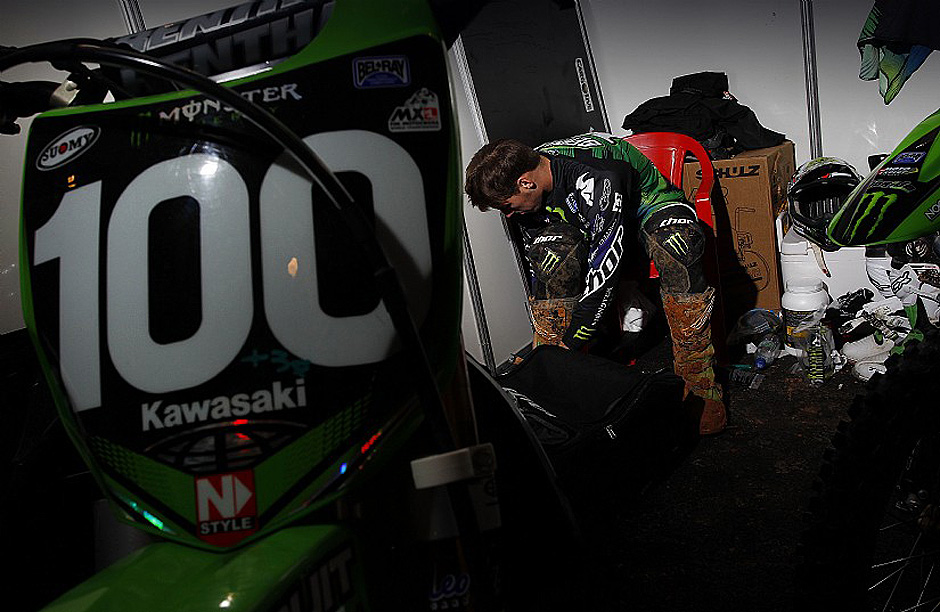 The Englishman was in a class of his own on a track made extremely muddy by overnight rain; he quickly took over the lead in both motos and rode two tactical brilliant races to come home unchallenged each time. Even a slip midway through the opening moto could not halt his domination as he coolly pitted for fresh gloves and quickly regained the lead. The double success has brought him to within 20 points of the series pace after five GPs of the 16 round series.

Searle’s teammate Joel Roelants continues to recover from a heavy crash last month and only missed the podium by a single point despite a troubled first moto when he crashed numerous times in the sticky going.

Dylan Ferrandis of Team Rockstar Bud Racing Kawasaki was racing for the first time in such treacherous conditions but had moved into the top ten of the opening moto until he was struck on the eye by a stone; the resultant adverse effect on his vision caused him to crash, but the teenager rebounded to finish eleventh in race two. Teammate Valentin Teillet tried to compete but found the discomfort from the wrist he injured the previous weekend in Mexico too great and withdrew from the event before racing.

Tommy Searle: “I’m not the best mud rider, but I knew I needed good starts and to ride smart. I took the lead quickly in both races and concentrated on not making mistakes and keeping my goggles free of mud when I came up behind lappers. I slipped off once in the first race and my gloves were covered in mud but it was easy to retake the lead after I stopped for fresh gloves. The result today means I have halved the points gap to the series leader and makes up for my bad luck in Italy.”

Joel Roelants: “I had a really good start in the first race, but then I crashed no less than six times during the race! I was still able to finish fifth. The second race was better with a fourth position, but I feel that I can do much better and that is frustrating for me. I will go back home to train even harder during the next two weeks; I want better results in France.”

Dylan Ferrandis: “It was the first time that I rode on a track as muddy as this, and I had a bad position on the grid so my starts were pretty difficult. I was tenth in the first race when a stone hit me in one eye; I tried to carry on but it was irritating me and caused me to crash. The second race was a little bit better, but I can’t be happy with an eleventh position.”

Valentin Teillet: “I had several examinations after Mexico and nothing is broken in my wrist, so I wanted to try to ride here. I did several laps on Saturday, but it was too painful and as we have the final round of the French Elite next weekend we decided not to race the GP; I’m currently leading the Elite series, and we want to get the title.”

Christophe Pourcel of Team CP377 Monster Energy Kawasaki Pro Circuit won his second GP of the year in the Brazilian round of the FIM World MX1 Motocross Championship at Beto Carrero.

Heavy overnight rain had made conditions treacherous but Pourcel was in superb form, winning the opening race by nearly a minute and a half despite slackening his pace in the final laps. He again took the lead in the second moto, but a couple of incidents as he caught up to lap the tailenders cost him the race win; however a 1-4 scoreline in the two motos was more than enough to clinch overall honours on the day and move Christophe up to third place in the series.

Gautier Paulin of the Kawasaki Racing Team narrowly missed joining Pourcel on the podium after two solid races to third and fifth. A single error in the early stages of race two cost him several places and he was eventually edged out of third place overall only on the tie-break, but he closed his deficit on the series leader by 11 points.

It was an historic day for Paulin’s teammate Xavier Boog as the 24 year old recorded his first-ever race victory in the MX1 world series, taking the lead from Pourcel halfway through the second race and repelling the challenges of Pourcel and two other riders to the chequered flag.

Sebastien Pourcel had an unfortunate day, missing the points in both motos after a string of riding errors.

Christophe Pourcel: «It’s never easy in conditions like these, but my Kawasaki gave me a great start in both races and the first moto was unbelievable. I didn’t feel I was riding super fast but after only a few laps my mechanic boarded me that I was a minute in front. In the second race I made a few mistakes with the lappers. I was planning to repass Boog in the closing laps; in the end it was me who made a couple of mistakes and I lost two places, but I knew I still had the overall win. »

Gautier Paulin: « The team worked hard this weekend, and I wanted to give them a podium but in the end I just missed it. I chose a middle gate and it worked well on Saturday but not so well in the mud on Sunday. I recovered to third in the first race, but in the second one I made a mistake in the second lap; I lost too much time and could only get back to fifth. It’s great for the team and our prospects for the rest of the season that Xavier won his first GP moto today. »

Xavier Boog: « It’s a great feeling to win a GP moto for the first time! The last few laps seemed to last for ever as Desalle, Pourcel and Strijbos all challenged me, but my Kawasaki kept running perfectly and I could hold them off. The first race had been more difficult; I crashed twice and then stalled the motor. »

Sébastien Pourcel: « I was not riding so well this weekend, and I made too many mistakes. In both races I crashed on the first lap. Each time I came back though the pack but then crashed again; the second time I was trapped under the bike.