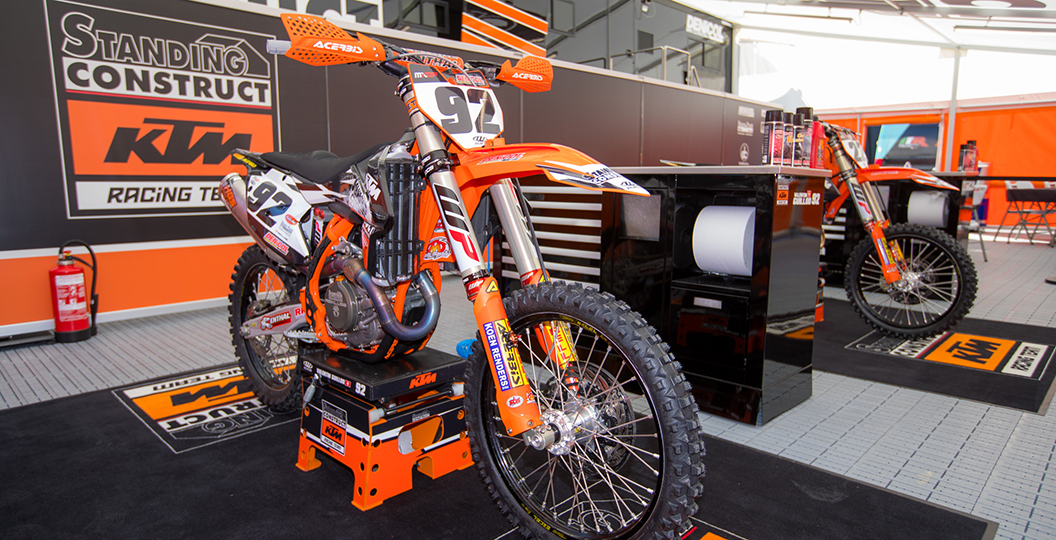 Tim Mathys owns the Standing Construct KTM squad and can rest now, knowing that his squad is complete and poised to achieve great things when the FIM Motocross World Championship fires into life in March. Mathys announced the signing of Max Anstie earlier today and then provided some insight in this exclusive MX Vice interview.

MX Vice: This season marked Standing Construct’s return to MXGP. Did it play out exactly as you thought it would? Injuries made it very tough, but are you pleased that you made the decision to come back?

Tim Mathys: The reason why I decided to come back to MXGP was because of the fact that I felt that I needed something more in life than just working all of the time. I have no kids and no close family, so all I did was work and work. I felt that I just needed motocross to keep me motivated to work so hard in the construction company. Additionally, the publicity through the team was also an important factor. Both of those things motivated me and for sure I am happy to have taken the decision to come back.

Regarding the results, for sure the expectations were higher but I cannot blame anyone for that. Both Kevin Strijbos and Valentin Guillod worked hard during the winter months, were well prepared and ready to begin the GPs when they both got injured. Unfortunately, both of them kept struggling with injuries and their health through the complete season. Although it was not easy for them they have shown that we have good bikes, especially Kevin at the end of the season when he showed that he still has top-ten speed. Luckily KTM saw, despite the lack of results in the first half of the season, that we are still a powerful team and that resulted in a long-term agreement. That is obviously important if you want to compete at the highest level.

Although you only missed a season, did anything surprise you once you did return? Was there anything that had changed quite quickly?

The level of MXGP has risen a lot. There are now two guys who are faster then the rest of the field, but than you have ten riders who can go for that third place. The difference between MXGP and MX2 was way bigger than what I thought it was. I was just not aware of the difference and how much more interest both the sponsors and public have in MXGP compared to the MX2 class. Like the promotor states, the system is a pyramid with MXGP on top and that is something I really felt this year.

I know in the off-season you mentioned that both Valentin and Kevin fit in well with the team. Did the decision to not re-sign them simply come down to results and on-track performance? Were you happy with the way both riders went about their training and riding during the season?

Both riders were great people to work with. They are both very professional and did everything that could have been expected of them. Unfortunately the results were not in line with how hard they worked, but that is unfortunately a part of sport.

Glenn Coldenhoff was your first signing for next year. I’m guessing that based on your history with him, it was an obvious signing for you?

We had two riders on the top of our list and Glenn was one of them. Like you mentioned, we knew Glenn from in 2013 and we remembered what a great guy he was to work with. We started talking with him soon and were happy that, although he had some other lucrative offers, he chose to come to our team. Obviously he also knew how it was to work with us and that we have a very competent crew. With Glenn you never have to wonder if he trained how he should, if he partied too much or behaved like an athlete. If Glenn isn’t performing well then there is a reason for it.

Signing Ivo Monticelli was a surprise to a lot of people. What thought process went into bringing on a younger rider like him? What do you expect from him?

After signing Glenn I decided to only talk with riders I was really interested in. A lot of them were talking to many teams, so we sat together in the team and looked for a rider who would fit in with the way we have always worked as a team. We wanted to get a rider, offer him what he missed before and get him to a higher level. I saw Monticelli during his youth days and was always wondering why he could not get the same results growing up. I saw him performing during the MXGP of France at St Jean d’Angely where he proved he has the speed to ride in the top ten, which he later confirmed at Loket.

I think that Ivo was missing a lot of factors to show his real potential and I am convinced that we can give him these. We expect Ivo to give it one hundred percent and to make the maximum use of everything we will offer him, which should result in getting him between tenth and fifteenth place. If he can achieve that goal then the next step is to get in the top ten consistently later on.

It seemed as though you were set with just two riders, then the deal with Max Anstie happened quite late. How did all of that come about so late in the season? Was it hard to make it work on the financial side?

We were already interested in Max from our MX2 days, but then lost him to Husqvarna. In the beginning of the season I heard that Max’s contract was finished at the end of this year so I spoke to his entourage. I spoke three times to them, but every time I felt that they were not interested in our team for one reason or another. Later in the season I was contacted by KTM, because they wanted to keep him on an Austrian bike.

After Assen I was so astonished that a rider like Max who is fast on the bike, has a great image and is great with publicity was still without a ride. After speaking once again with KTM I contacted Max directly and we found an agreement pretty quickly. All of our partners were very positive when I told them that we were talking with Max, so I was assured that I would be able to give him the best possible material with KTM.

What can you tell us about the support that your riders will have from KTM in 2019? The way that they support the team must be a huge help in many different ways.

Without KTM it would be impossible. Together with them and our important technical partners like GET, HGS and Rekluse we have the possibility to give all three of our riders competitive bikes to perform at the highest level. I think we have proven in the past that we are able to build fast bikes, but without the support of KTM it would not be possible. When I decided to come back into MXGP I only contacted them as I experienced the difference that it makes working with them in the past and the professionalism they offer, compared to other brands.

Besides that the KTM 450 SX-F is the best base to build a powerful bike as already in stock condition they are extremely competitive. Our bikes will be, like in the past years, a combination of factory parts with some great aftermarket parts and in-house development.

Not many teams will run three guys next year and there are now additional flyaway races, like Hong Kong and China. Is that worrying? Are you confident that you can make this work?

I manage a company with around ninety-five people working daily, so I know what it takes to organise things. I learned in my construction activities that you need the best people around you if you want to achieve the best results. I have great people working in Standing Construct and that is also how I composed my crew. I contacted the people who I know are the best in what they are doing and it is thanks to them that we have won four GPs and had nearly twenty podiums as a private team.

The cost of the overseas races is something that for sure has an impact on the financial organisation, but that is something we all know before we engage ourselves so it does not make sense to keep complaining about it. If you cannot stand the heat then stay out of the kitchen.

Finally, there were rumours about Jeremy Van Horebeek or someone else taking a spot at Standing Construct. Did you ever come close to signing a guy like that?

I spoke with Jeremy soon after he heard that he had to leave Yamaha. Maybe it would have been better to have spoken to him a little later, but unfortunately that is life.