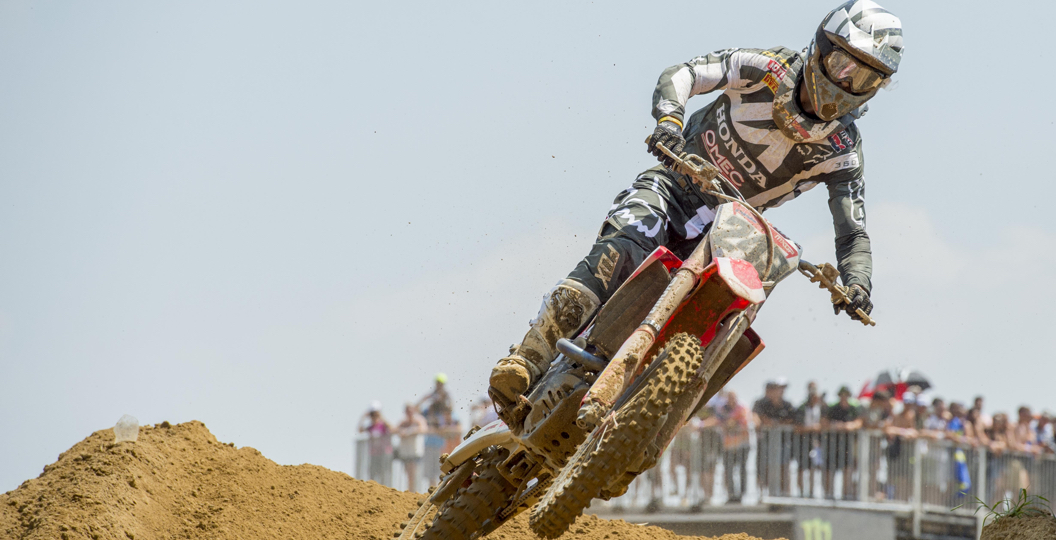 Tim Gajser returned to the FIM Motocross World Championship this weekend, but was seemingly not quite at his best. There were plenty of positives to extract from the Grand Prix of Lombardia, however, as he states in our exclusive interview.

MX Vice: Up and down day for you, really, but there were some good points. I think that is okay, because you just came back from injury and have established a bit of a base to build off of moving forward.

Tim Gajser: Yeah. I’m really happy to be back racing without any pain in my body, because the last couple of races that I did in Germany and then France I felt a lot of pain. I didn’t enjoy it at all and then I had to miss the Russian GP. I’m glad that we were back here and racing again. Actually first race the speed was there; I almost made a pass to Gautier for third place. I think I pushed a little bit too much there, because I lost a lot of energy when I was working different lines. I didn’t have enough energy to drive in the same rhythm until the end, so the last couple of laps were really long.

In the second race I crashed on the start and was dead last, but came back to eleventh I think and then I crashed again. I came back again to eleventh. For sure it’s not the place where we want to be, but that’s how it is. We will work hard and build from here. Already next week we have Agueda, which is hard-pack. It is better for me. I prefer hard-pack. I’m really looking forward to the second half of the season.

How long did you have on the bike before you came here? The decision to race was made pretty late, as far as I know?

Yeah, it was just one week before. I was just four or three times on the bike. Also I didn’t train since the crash in Kegums, then I had to heal. When I have pain in my body I couldn’t train. Then I came in Germany, crashed again and didn’t train at all. It was two months, I would say, but that’s how it is. I taste also that second different part. I know already how to win the title, how to win the races and now I taste also the different side. I’m really motivated, I will work hard and try to come back.

Although your injuries may be 100% now, how far off are you with your fitness? I’m guessing that is not where it necessarily needs to be?

I don’t know. If I tell you I didn’t train for one and a half months, so for sure the fitness is not where it should be. I would say 60%, something like that. In the beginning when I was winning GPs I was easily riding for thirty-five minutes without any pain, but now when you have had a couple of weeks off you feel that. Like I mentioned, we have to come back. I’m really motivated. I will work my ass off and try to be back on the top.

Is that your goal moving forward then, just to win as many GPs as possible? I’m guessing finishing third or fifth in the points doesn’t really matter for you?

No, the goal right now is not to think about the third or second place in the championship. It’s just to come back, start enjoying racing, get in the good condition, become in a good fitness and for sure try to win some GPs until the end.

You mentioned that quite a lot before the injury. You were finding it hard to enjoy racing with the pressure and everything like that. Did the time off maybe help you to reset mentally? Get away from the track and realize that this is what you enjoy doing?

I guess this injury and the fact that the title is gone, makes you happy that you have decided to stick with MXGP for another year rather than go to America? At least now you’ve got another shot at it and a chance to regain your crown.

Yeah. We are just in the middle of the season. Of course we are talking about it, but nothing is decided yet. We will see until the end how the season goes and we will decide after.