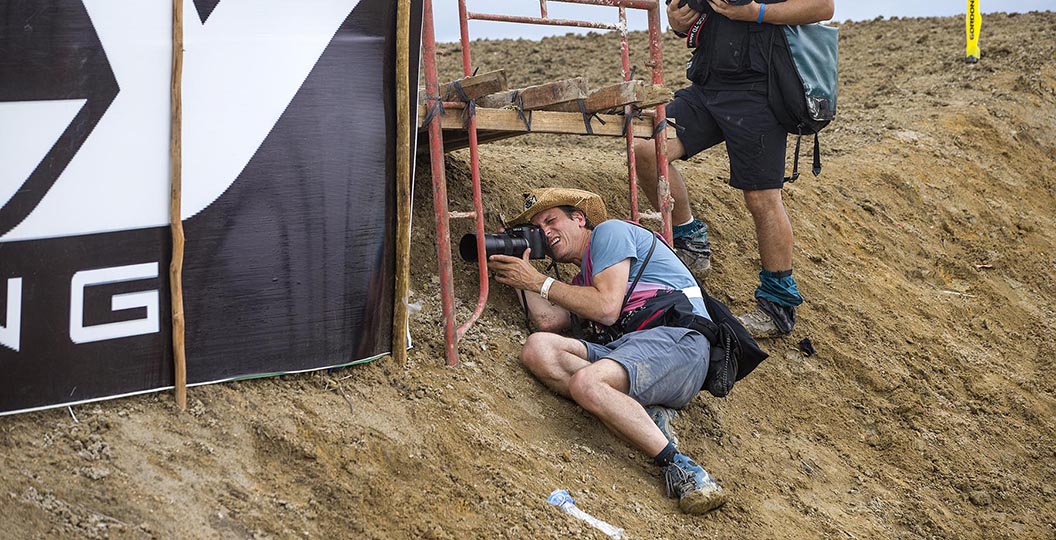 When the final chequered flag waved at the Motocross of Nations, held at RedBud, over the weekend, it marked the end of the current term and beginning of the tedious off-season, a time where fans are desperate to get their hands on any new moto-related content. Roddy MacLeod is on the verge of releasing a new photo book, based on the FIM Motocross World Championship and past champions, that will help enthusiasts push through the winter period.

Fans can now pre-order the book, named Will To Victory, on this link and learn more about the new project below. It sounds like a perfect Christmas present, right?

MX Vice: First off, just kind of talk about your background in the sport, what you have been up to in previous years and all of that.

Roddy MacLeod: I raced. I grew up in Canada. There of course hockey is the preferred sport. If the kids in Belgium are born with two wheels, either bicycles or motorcycles or whatever, then Canadians are born with skates. For the first fourteen years of my life I focused on hockey. Then friends of mine at school, they started getting dirtbikes. I thought, “Man, if my friends can get dirt bikes, I have to be able to get one too.” I really pestered my parents until finally they gave in. That was it. Me and the bike, something just clicked there. I could feel that this was really my thing. Team sports were okay. In school I didn’t really like them but me and my dirtbike, this was like one thing. I started racing after that.

Inside of four or five years I was a pro in Canada and I raced in the US as well, so my passion for the sport kind of grew from there. Then when I hit my early twenties I wanted to go to university and then I started a family, so I drifted away a little bit from the sport. Then when I hit my thirties, something like that, I really had the urge to go back and race. I did and we had a nice local scene in Atlantic Canada at that time. I made a website. This was late ’90s. There really wasn’t… Facebook hadn’t developed to the point where today you see a lot of local organisations organising through Facebook.

I built this website and there was a really nice community there. We had a really nice time. My son was racing. I was racing. My dad was racing motocross. He started when he was fifty-five, so we kind of had a family thing going there. It was really nice. Shortly after that, I moved to Germany for work in 2003. I wasn’t racing anymore. I didn’t know where to go, what to do or any of that. I saw that the Motocross of Nations was coming to Zolder in Belgium and at the office I said to my boss, “Hey, we have a company camera, a digital camera, right?” He said, “Yeah.” I said, “Look, I want to steal it for the weekend. I want to go to Zolder and take pictures.” He said, “Yeah, okay. Take the camera.”

I wanted to go to the race and be media. I looked online and they said, “Okay, but you have to have an editorial sponsorship from a magazine or whatever.” So I contacted a Canadian magazine and I said, “Hey, guys, I’m in Europe and I’m a photographer and I can make pictures for you at the ‘Nations.” They said, “Yeah, that’s great! Come on. You do that.” So that’s how it started. After that Zolder ‘Nations I bought my own camera and I just started photographing the GPs in 2004, 2005 and 2006 while I was living there. Then again for work I moved to the United States and kind of drifted away. A few years ago, I moved back to Germany again for work. Then my company merged with another company and I took the opportunity to step out of that industry. I left the company and I thought, “What are you going to do now?” I thought, “Why don’t you do what you always loved to do, which is to go back to the motocross track?” That is what I have decided to do.

I had this idea that instead of photographing for magazines or for online or something like that, I wanted to do something deeper. I wanted to get deeper into the sport. What fascinated me was guys like Stefan Everts and Tony Cairoli, these guys that feel like one championship is not enough. If you are world champion, shouldn’t that be enough? It’s not for some guys. Tony needs to be nine. He wants to be ten or eleven-time champion, I’m sure. Stefan Everts the same thing. I thought, “Man, there’s a real psychology behind that. I want to understand that.” This year what I’m doing is making a photo book, yes, but it’s also filled with text.

The text is about trying to understand this mentality behind winning a world championship, multiple world championships and what the motivation is. I have taken photos of the 2018 series and we were lucky. We had a great championship in MX2 and a great championship in MXGP. It’s really been an unbelievable year, so that’s the backdrop. Then in the foreground I also have interviews with these champions. Stefan Everts I’ve interviewed. Harry Everts as well. Joel Smets. Dave Thorpe. The content of those conversations is really about getting to their internal motivations and what’s driving them. So anybody who is interested to know more about the mentality or the psychology behind being a world champion will be interested in this book.

Why now? Why didn’t you do this last year? Why not next year? What made you want to do it this particular year?

Well, as I said, I left my company a year ago, so then I wasn’t in a position to do it. This is a self-funded project. I’m not taking money from a company, from Youthstream or anybody to do this. This is all on my own effort. So I have the freedom to photograph what I want, interview the people I want and talk about what I want. You cannot have a job and do that at the same time, I think. I’m in a great position. I’ve got this chance now where I’ve taken a full year of my life and dedicated it basically to the sport, so that’s the whole idea.

If someone asks what the point in buying the book is, I guess the answer would be that it is completely unique and there’s been nothing like it anywhere else?

Well, that’s what I’m hoping for, yes. Let’s look to photo books. Many times it’s a photo album, which is just a collection of photos from all the races organised by race or organised by rider sometimes, which is nice. It’s eye candy, so to say. Then what else can you look at? You can look at magazines. Magazines have articles. The articles always follow a certain length. There’s always eight to ten or twelve photos, so you never get really deep into the topic. Then online is even more to the moment. Then if you look to social media you look at a photo for two seconds, one second or maybe half of a second.

If you make a book, it’s a different process. If you have a photo book with text that’s describing what’s going on behind the racing, then you have to go to your shelf and you have to pull it down from the shelf. You have to find a comfortable seat to sit down. You have to turn the pages. The book has a smell. It’s a totally different experience. I think that the topics I’m taking on are a bit more in-depth and I think that the book is the right medium for that kind of thing. Ultimately what I want to do is I make a book that in twenty years I still want to read. That’s the whole idea.

One thing that I have kind of got from this is that if someone hates to read, it is 50/50 and they can still enjoy the book. The same goes for someone who likes to read, there is also a part for them. Really no one should feel alienated or like this isn’t for them.

Luckily everybody is able to read as well, so when you make a book it’s a nice thing to make a photo book also with text. The photos, I think, will pull people in. People want to look at their heroes. They want to look at the bikes. They want to look at the tracks. The book will have all of that, of course, and in a unique style, I believe. A little bit different from what you see in the magazines. Most of the times you see a picture or pictures from the track, you see a photo and eighty percent of that photo is the bike and the rider. You see very little from the background. You don’t get a true sense of where we are now.

What is the context that the rider is riding in? What does the track look like? My photos many times stand a little bit further back, so you’re getting a richer context. You’re seeing more of the place and the locale. That’s intentional. It’s meant to give the reader something to stare at for more than two seconds. You should be able to look at those photos for minutes at a time, or even longer, because there’s a lot of information in there. There’s a lot of detail. There’s a lot of context that helps the reader understand what are the riders going through? What is their mentality behind their racing? That’s the thinking behind the photography.